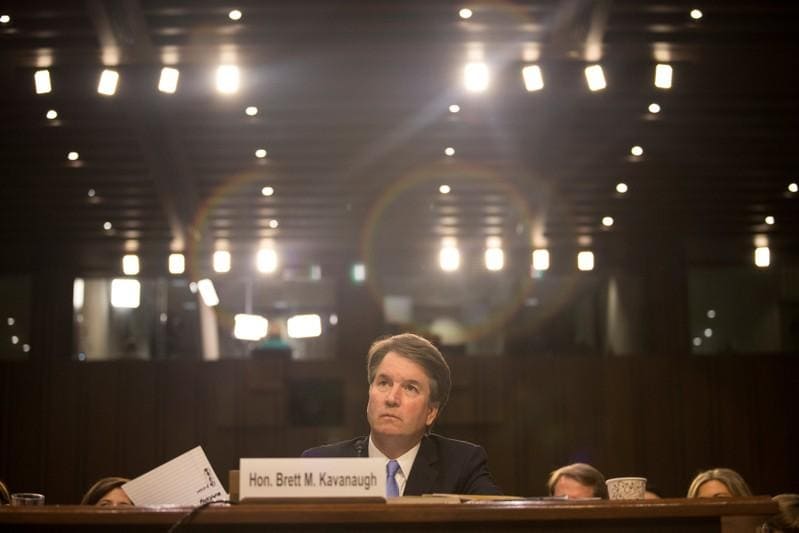 The woman, Julie Swetnick, detailed her allegation in a statement to the Senate Judiciary Committee a day before the Republican-led panel is set to hold a high-stakes hearing in which Kavanaugh and Christine Blasey Ford, who has accused him of a sexual assault in 1982, will testify.

"This is ridiculous and from the Twilight Zone," Kavanaugh said in a statement released by the White House. "I don't know who this is and this never happened."

Swetnick is represented by lawyer Michael Avenatti, who also represents adult film star Stormy Daniels in a lawsuit against Trump to void a non-disclosure agreement under which the president's former personal lawyer paid her $130,000 not to discuss her alleged relationship with Trump more than a decade ago.

Speaking to reporters in New York, where he is attending the annual U.N. gathering of world leaders, Trump said of the new allegation, "I think it's ridiculous." On Twitter, Trump called Avenatti "a total low-life" and "a third rate lawyer who is good at making false accusations." Avenatti responded on Twitter, calling Trump "a habitual liar and complete narcissist."

In her statement, Swetnick said she attended more than 10 house parties in the Washington area from 1981 to 1983 where Kavanaugh was present. She described gang rapes she said occurred in which boys would line up to rape incapacitated girls.

"In approximately 1982, I became the victim of one of these 'gang' or 'train' rapes where Mark Judge and Brett Kavanaugh were present," she said, mentioning the name of a close friend of Kavanaugh. She did not identify her attackers and did not accuse Kavanaugh of taking part.

She also said she witnessed efforts by Kavanaugh and others "to cause girls to become inebriated and disoriented so they could then be 'gang raped' in a side room or a bedroom by a 'train' of numerous boys," adding she remembers boys including Kavanaugh getting in lines to take part in these rapes.

Reuters was not immediately able to verify her accusations. Swetnick and Avenatti did not immediately respond to requests for comment. An attorney for Judge said he denied Swetnick's allegation.

In an interview with Fox News on Monday, Kavanaugh was asked whether he ever participated in or was aware of any gang rape at a party he attended. "That's totally false and outrageous. I've never done any such thing, known about any such thing," Kavanaugh responded.

Supreme Court appointments must be confirmed by the Senate, and Trump's fellow Republicans control the chamber by a narrow 51-49 margin, meaning Republican defections could sink his nomination. The controversy has unfolded ahead of the Nov. 6 congressional elections in which Democrats seek to take control from the Republicans.

Trump chose Kavanaugh, a conservative federal appeals court judge, for a lifetime job on the top U.S. court in July after the retirement of Justice Anthony Kennedy. Kavanaugh's confirmation would cement conservative control of the Supreme Court, as Trump moves to shift the high court and the broader federal judiciary to the right.

A committee vote on his confirmation is due on Friday, with a final Senate vote as early as Tuesday.

Ford, a psychology professor at Palo Alto University in California, has said Kavanaugh attacked her and tried to remove her clothing when both were high school students in Maryland while he was drunk at a party when he was 17 years old and she was 15. Another woman, Deborah Ramirez, has accused him of exposing himself during a drunken dormitory party during the 1983-84 academic year when both attended Yale University.

Senate Democratic leader Chuck Schumer and all the Judiciary Committee's Democrats called on Kavanaugh to withdraw in light of the allegations, and said if he does not, an FBI investigation is needed before any Senate confirmation vote.

Republican Senator Chuck Grassley, the committee's chairman, said the hearing will go forward as planned and that the panel's staff is looking into the Swetnick's allegation.

Lawyers for Ford, who has accused Kavanaugh of a sexual assault in 1982, released signed documents from Ford's husband, Russell Ford, and three friends, seeking to offer corroboration for her account.

Russell Ford said his wife shared her story during a couples therapy session in 2012 and friends Keith Koegler, Adela Gildo-Mazzon and Rebecca White said Ford told them separately of the incident between 2013 and 2017.

In testimony released ahead of Thursday's hearing, Kavanaugh denied all the allegations against him but said he was "not perfect" during his high school days.

The latest developments in the pitched battle over Kavanaugh's confirmation added to the perception of Washington as paralysed by partisan rancour and legislative dysfunction.

"We sometimes seem intent on stripping people of their humanity so that we might more easily disregard or defame them and put them through the grinder that our politics requires. We seem, sometimes, to even enjoy that," Flake said of the Washington culture.