By Steve Holland and Patricia Zengerle UNITED NATIONS/WASHINGTON (Reuters) - President Donald Trump confirmed on Tuesday he had withheld nearly $400 million in U.S. aid to Ukraine but denied he did so as leverage to get its president to initiate an investigation that would damage Democratic political rival Joe Biden. In Washington, House of Representatives Speaker Nancy Pelosi was meeting with fellow Democratic lawmakers to consider impeachment of the Republican president - who has withstood repeated scandals since taking office in 2017 - as support for the action grew inside her party 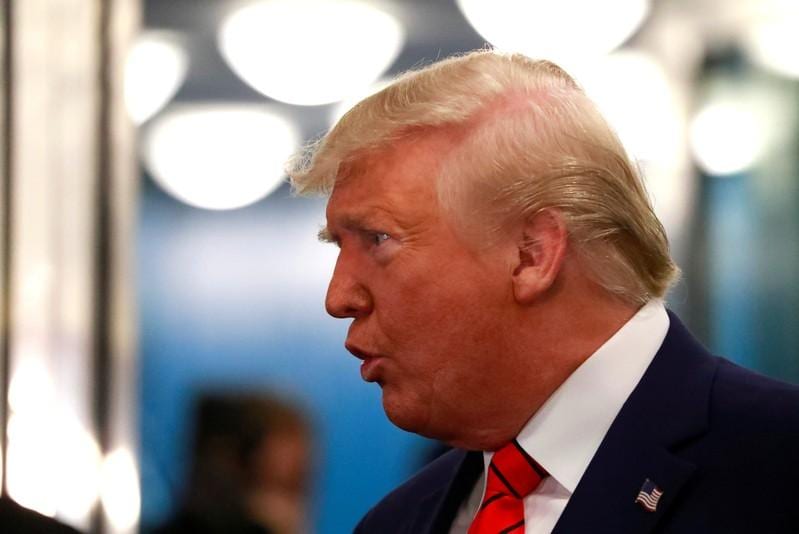 UNITED NATIONS/WASHINGTON (Reuters) - President Donald Trump confirmed on Tuesday he had withheld nearly $400 million in U.S. aid to Ukraine but denied he did so as leverage to get its president to initiate an investigation that would damage Democratic political rival Joe Biden.

In Washington, House of Representatives Speaker Nancy Pelosi was meeting with fellow Democratic lawmakers to consider impeachment of the Republican president - who has withstood repeated scandals since taking office in 2017 - as support for the action grew inside her party.

Pelosi is scheduled to make a public statement at 5 p.m. (2100 GMT) as Democrats consider whether to try to remove Trump from office for what they see as trying to enlist a foreign power to smear a domestic political opponent.

In remarks to reporters over the intensifying controversy, Trump sought to portray that there was nothing sinister about withholding the aid, saying he wanted Europe and not just the United States step up and provide Ukraine assistance.

The money was later released by the Trump administration.

"There was never any quid pro quo," Trump told reporters at the United Nations, using a Latin phrase meaning a favor that is exchanged for a favor.

In a public statement set for later in the day, Biden will call on Congress to impeach Trump if the president does not comply with congressional requests for information on Ukraine and other matters, a Biden spokesman said.

Trump is seeking re-election next year and Biden, the former U.S. vice president, is the front-runner for the Democratic presidential nomination.

Trump on Sunday acknowledged that he discussed Biden and Biden's son Hunter, who had worked for a company drilling for gas in Ukraine, with Ukrainian President Volodymyr Zelenskiy.

But Trump on Monday denied trying to coerce Zelenskiy in the July 25 phone call to launch a corruption investigation into Biden and his son in return for the U.S. military aid.

Arriving at the United Nations before his speech to the annual General Assembly, Trump confirmed that he had wanted the money for Ukraine frozen, saying European countries should provide assistance to Kiev, but changed his mind after "people called me."

However, Trump told reporters he still felt other nations should be paying to help Ukraine. "The money was paid, but very importantly, Germany, France, other countries should put up money," Trump said.

Regarding aid to Ukraine, Trump said, "We're putting up the bulk of the money, and I'm asking why is that? ... What I want, and I insist on it, is that Europe has to put up money for Ukraine also."

The United States has been providing military aid to Ukraine since Russia annexed Crimea in 2014. The $391.5 million in aid at issue in the current controversy was approved by the U.S. Congress to assist Ukraine in dealing with an insurgency by Russian-backed separatists in the eastern part of the country.

Trump's explanation for withholding the aid differed from one he offered a day earlier when he said, referring to Ukraine, "We want to make sure that country is honest," and "Why would you give money to a country that you think is corrupt?"

Trump on Tuesday also indicated he expects a "readout" of the phone call with Ukraine's president to be made public.

The controversy came to light after a whistleblower from within the U.S. intelligence community lodged a complaint with an internal watchdog about Trump's conversation with Zelenskiy, leading to calls from some Democrats that Trump be impeached for trying to enlist a foreign power to smear a domestic opponent.

In a letter to Mike Mulvaney, director of the White House Office of Management and Budget (OMB), Menendez said "it is becoming clear that" Trump put pressure on Ukrainian officials.

Under the U.S. Constitution, the House has the power to impeach a president for "high crimes and misdemeanors" and the Senate then holds a trial on whether to remove the president from office. No president has ever been removed from office through impeachment. Democrats currently control the House and Republicans control the Senate.

A House committee has already launched a formal impeachment probe of Trump in light of his actions in the Russia matter but the impeachment drive never won the support of key party figures including Pelosi.

Pelosi appeared to be moving closer to favoring impeachment as Democrats demand that the Trump administration release details of a whistleblower complaint and the transcript of his call with Ukraine's president.

Democratic Representative John Lewis, speaking on the House floor, said he now believed it is time to begin impeachment proceedings.

"I'm leading in the polls. They have no idea how they stop me. The only way they can try is through impeachment," Trump said at the United Nations, although opinion polls show Biden actually leading Trump.

Three House committees wrote to White House Counsel Pat Cipollone saying they wold issue a subpoena if documents related to Trump's dealings with Ukraine are not turned over by Thursday.

In his letter, Menendez noted that the U.S. State and Defense Departments recommended and prepared to distribute in late June $391.5 million in military and security assistance to boost Ukraine's armed forces as the country dealt with Russian aggression and sought to improve maritime security in the Black Sea.

However, weeks before Trump's call with Zelenskiy, OMB blocked the aid, Menendez said in the letter to Mulvaney.

Joseph Maguire, acting U.S. director of national intelligence, is defying a federal law mandating that the whistleblower report be shared with Congress. Maguire is due to testify at a public House intelligence committee hearing on Thursday.

(Reporting by Patricia Zengerle in Washington and Steve Holland at the United Nations; Writing by Will Dunham; Editing by Alistair Bell)