By Joseph Tanfani, Katanga Johnson and Nathan Layne PHILADELPHIA (Reuters) - Backers of President Donald Trump and his Democratic rival Joe Biden staged competing demonstrations on Thursday at voting centers in U.S. states where final vote tallies could determine who occupies the White House for the next four years. Protests have been scattered, small and largely peaceful since Americans went to the polls on Tuesday, defying pre-election fears that tensions could erupt into violence or riots. 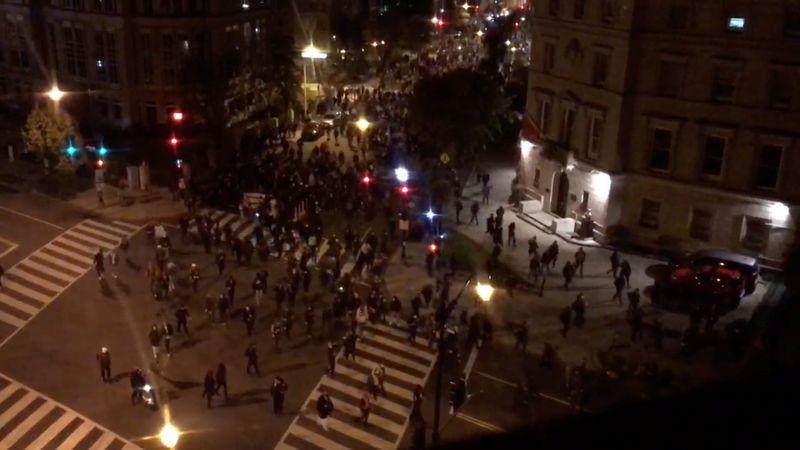 PHILADELPHIA (Reuters) - Backers of President Donald Trump and his Democratic rival Joe Biden staged competing demonstrations on Thursday at voting centers in U.S. states where final vote tallies could determine who occupies the White House for the next four years.

Protests have been scattered, small and largely peaceful since Americans went to the polls on Tuesday, defying pre-election fears that tensions could erupt into violence or riots.

Biden supporters have adopted the slogan "count every vote," saying that a complete and accurate tabulation in the remaining battleground states would show the former vice president had won the 270 electoral votes needed to win.

Trump campaigners countered with chants of "protect the vote" as the president goes to court in several states to challenge some categories of ballots, such as those arriving in the mail after Election Day, or demand recounts.

Biden supporters danced to music behind a barricade across the street.

In Harrisburg, about 100 Trump supporters gathered on the steps of the Pennsylvania State Capitol Building on Thursday afternoon as part of a "Stop the Steal" demonstration organized by Virginia conservative activist Scott Presler.

Some carried Trump signs, others American flags, and a few wore T-shirts emblazoned with a logo denoting the conspiracy theory known as QAnon.

"This is not a rally supporting a particular candidate," Presler said. "This is a rally fighting for two things: truth and justice." He said in an interview that he planned to raise funds for an audit of the state's vote count.

Republican U.S. Representative Jim Jordan of Ohio, an outspoken supporter of Trump, said at the state capitol building he was concerned about ballots arriving in the mail without a clear postmark.

"The administration wants to count every legal vote, every legitimate ballot," Jordan said. "This is the closest election we've maybe ever had. You don't want ballots that arrived after the Election Day with an indistinguishable postmark."

Earlier on Thursday, a state appellate court ruled that Republican observers could enter the building in Philadelphia where poll workers were counting ballots.

Although counting was already completed in Michigan, projected by several major news outlets as a win for Biden, a few dozen Trump supporters waved flags and signs outside a Detroit counting center.

Elizabeth Fohey, a 74-year-old retired dental hygienist from Troy, Michigan, said she was skeptical that election officials were counting all conservative votes.

"My message is to have the vote done correctly," she said, dressed in a U.S.-flag-themed windbreaker.

In Wisconsin, Bobbie Dunlap, an information technology worker who lives in Genoa City, complained that she had voted in person for Trump on Election Day but her vote still not been marked as processed on Wisconsin's website.

"We are organizing a peaceful march on the capital to ask for a full audit of the election here in Wisconsin," she said.

Trump's campaign has called for a recount in the state, where news organizations have pronounced Biden the winner by a razor-thin margin.

In Washington, D.C., a procession of cars and bicycles sponsored by activists from a group called Shutdown DC paraded slowly through the streets of the capital to protest what they called "an attack on the democratic process" by Trump and his "enablers," according to its website.

Most demonstrations in cities around the country have been peaceful and small — sometimes amounting only to a few dozen people with signs standing in a city center — as Biden's path to victory looked a bit more assured than Trump's. Either outcome remains possible.

Police in New York City, Denver, Minneapolis and Portland, Oregon, said they had arrested some protesters, often on charges of blocking traffic or similar misdemeanors.