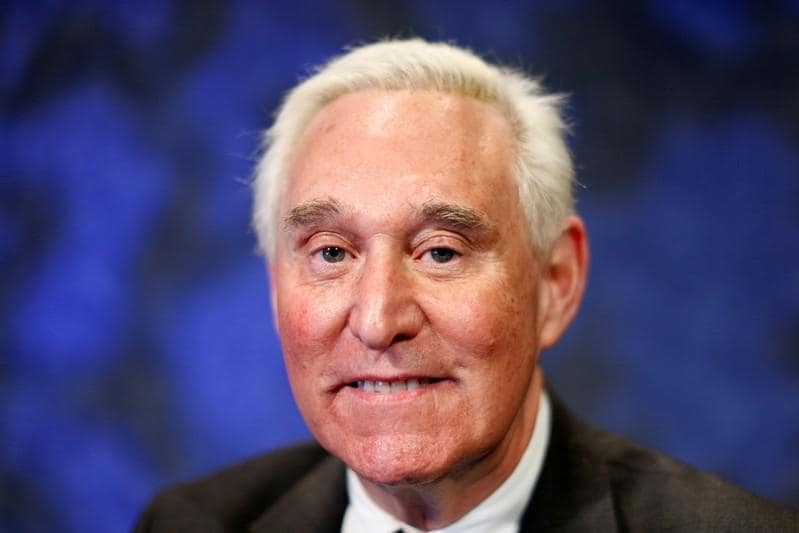 FORT LAUDERDALE, Fla. (Reuters) - A longtime ally of U.S. President Donald Trump was arrested on Friday for lying to Congress about the 2016 campaign's efforts to use stolen emails to undercut his Democratic rival in the latest arrest of the Special Counsel probe into possible election manipulation.

He is one of the closest Trump associates to be charged in Special Counsel Robert Mueller's investigation into whether Trump's campaign colluded with Russia to help win the election.

Mueller said in court papers that Stone shared with multiple members of the Trump campaign team advance knowledge he had of a plan by WikiLeaks to release senior Democrats' emails.

The charges mark the first time the Trump campaign has been publicly tied to WikiLeaks by Mueller's team and add to pressure on the president as the newly installed Democratic majority in the House of Representatives plans to step up investigations of him.

"Greatest Witch Hunt in the History of our Country! NO COLLUSION!," Trump wrote on Twitter following Stone's arrest, using his most common denunciation of the Mueller probe.

Stone was charged with seven criminal counts including obstruction of an official proceeding, witness tampering and making false statements. He is due to be arraigned in federal court in Washington on Tuesday.

The charging documents included new details about Trump aides' alleged activities, including an incident in which a senior campaign official "was directed to contact Stone about any additional releases and what other damaging information" WikiLeaks had about the Clinton campaign.

The construction of that sentence does not make clear who gave that order to a senior campaign official, but raises the possibility the order came from Trump himself.

Mueller spokesman Peter Carr declined to comment on who gave that order. The White House did not immediately respond to a request for comment.

If Trump did give the direction, he would have engaged in a conspiracy to violate federal hacking statutes, said Paul Rosenzweig, a lawyer who worked on the Whitewater investigation into former President Bill Clinton.

"You are directing Stone to take possession of what he knows to be stolen materials," said Rosenzweig, now a fellow at the R Street Institute think tank.

Former federal prosecutor Barbara McQuade said that if Trump gave the direction, it could be evidence the president participated in a conspiracy to defraud the United States by interfering with the fair administration of elections.

Legal scholars are divided about whether a sitting president can be indicted. Many believe the remedy for criminal activity would be impeachment.

In a rowdy scene outside a courthouse in Fort Lauderdale, Stone denounced his arrest as politically motivated and told reporters he had done no wrong.

"After a two-year inquisition, the charges today related in no way to Russian collusion, WikiLeaks coordination or any other illegal act in connection with the 2016 campaign," he said, flashing the twin "V for Victory" signs that the disgraced President Richard Nixon was famous for.

"I will not testify against the president because I would have to bear false witness against him."

A crowd chanted "Lock Him Up," riffing on the "Lock Her Up" chant that Trump and his surrogates led against Clinton at rallies in 2016. Someone played the Beatles song "Back in the U.S.S.R." Others cheered in support of Stone.

A magistrate judge released Stone on a $250,000 bond and ordered him to limit his travel to South Florida, New York City and Washington.

Stone's reputation as an aggressive political operative dates back to the Watergate scandal of the 1970s when he was working for Nixon. He has a back tattoo of the late president's face.

The indictment showed him using language evoking mob bosses - and even citing a "Godfather" movie - as he called an unnamed associate facing FBI inquiries "a rat. A stoolie."

WikiLeaks, referred to in the indictment as "Organization 1," did not respond to a request for comment.

More than 30 people have pleaded guilty, been indicted or otherwise swept up in the Russia inquiry, which has clouded Trump's two-year-old presidency.

They include former close associates of Trump such as his one-time lawyer Michael Cohen and former campaign chairman Paul Manafort, as well as 12 Russian intelligence officers.

The indictment referred to an October 2016 email from a "high-ranking Trump Campaign official" asking Stone to inquire about future releases of emails by "Organization 1." Stone responded that "Organization 1" would release "a load every week going forward."

The high-ranking official is believed to be former Trump campaign chief Steve Bannon, according to a person familiar with the matter. Bannon did not respond to a request for comment.

The interactions with WikiLeaks covered in the indictment occurred days before Trump called out to Russia during a campaign stump speech for help finding "missing" emails from Clinton's time as secretary of state, according to Democratic U.S. Representative Adam Schiff.

"At the very time that then-candidate Trump was publicly encouraging Russia's help in acquiring Clinton-related emails, his campaign was privately receiving information about the planned release of stolen Clinton emails," Schiff said in a statement.

The Kremlin has denied interfering in the election..

Stone's ties to Trump go back four decades. Stone has urged Trump to run for president since 1988, was chairman of his 2000 presidential exploratory committee and was a consultant when Trump considered running in 2012.

Stone briefly worked for the 2016 Trump campaign but left in August 2015. The campaign said it fired him after he tried to grab too much of the spotlight. Stone insisted that he quit.

Thereafter, he still played a key promotional role for Trump and communicated with people in his camp.