By Roberta Rampton (Reuters) - The Trump administration turned up the pressure on Venezuelan President Nicolas Maduro on Friday by targeting his son Nicolas 'Nicolasito' Maduro with sanctions, the U.S. Treasury Department said. The new sanctions are the latest push in six months of efforts to oust Maduro, whose 2018 re-election has been deemed illegitimate by the United States and most Western nations 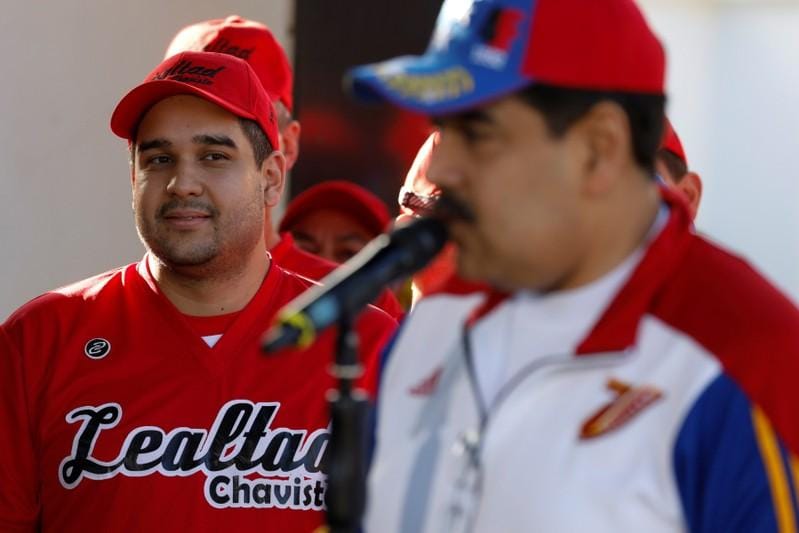 (Reuters) - The Trump administration turned up the pressure on Venezuelan President Nicolas Maduro on Friday by targeting his son Nicolas "Nicolasito" Maduro with sanctions, the U.S. Treasury Department said.

The new sanctions are the latest push in six months of efforts to oust Maduro, whose 2018 re-election has been deemed illegitimate by the United States and most Western nations.

Maduro's son has been involved in propaganda and censorship, has profited from Venezuelan mines, and helped pressure the military to keep humanitarian aid out of the country, the Treasury Department said.

"Maduro relies on his son Nicolasito and others close to his authoritarian regime to maintain a stranglehold on the economy and suppress the people of Venezuela," Treasury Secretary Steven Mnuchin said in a statement.

"Treasury will continue to target complicit relatives of illegitimate regime insiders profiting off of Maduro's corruption," said Mnuchin, who is in Osaka, Japan, with President Donald Trump for a G20 summit.

The Venezuelan government called the new measures "illegal" and said they had the "dark aim" of trying to directly attack Maduro's family after the Trump administration's previous attempts to overthrow the socialist leader had failed.

The government "rejects the continued attacks by the Trump administration that seek to undermine, unsuccessfully, the spirit and will of a people determined to take the reins of their own destiny," it said in a statement.

Washington has thrown its support behind opposition leader Juan Guaido, the head of Venezuela's National Assembly, who invoked the country's constitution in January to declare himself interim president.

Maduro has retained the backing of the country's military and other institutions, and calls Guaido a Washington puppet.

The new sanctions come as Trump holds a series of meetings with world leaders on the sidelines of the G20.

Trump raised the subject of Venezuela with Russian President Vladimir Putin, who backs Maduro, and Brazilian President Jair Bolsonaro, a Guaido supporter, on the first day of the summit.

Asked whether momentum had been lost in efforts to oust Maduro, Trump told reporters: "No, not at all. Things take time."

On the second day of the G20, Trump is scheduled to speak with Turkish President Tayyip Erdogan and Chinese President Xi Jinping, both of whom support Maduro.

"Venezuela is going to come up at most of the conversations the president has out there. That's because the president has not lost focus on Venezuela," a senior U.S. administration official said, speaking on condition of anonymity.

More information will be released in coming weeks about the younger Maduro's "direct role in corruption," the official said, declining to give further details.

Maduro appointed his son the head of the Corps of Inspectors of the Presidency and he is also a member of Venezuela's National Constituent Assembly, a pro-Maduro legislative superbody created by the government in 2017 to override the opposition-controlled National Assembly.

The United States does not regard the National Constituent Assembly as legitimate and has previously imposed sanctions on other people involved in it.

The Treasury designation means that any assets held by the younger Maduro in the United States will be frozen - and will make it difficult for him to move money through the international banking system.

The senior administration official declined comment on whether the younger Maduro has assets in the United States.

The Trump administration is continuing to work on sanctions for other individuals connected to Maduro, including magistrates on Venezuela's supreme court who have not yet been designated, the official said.

"We will continue to target corruption and squeeze the Maduro regime until it no longer has funds with which to prop itself up," the official said.

(Reporting by Roberta Rampton in Osaka; Additional reporting by Angus Berwick in Caracas; Editing by Bill Trott and Rosalba O'Brien)