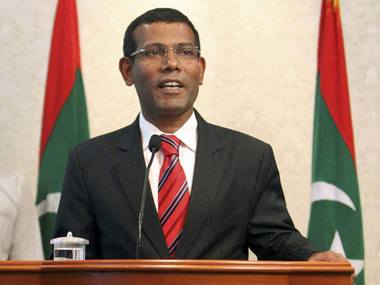 "There may have to be investigations into the actions of several people in the former administration," police spokesman Ahmed Shiyam told AFP.

"Until the new government takes a decision on what to do with them, they will not be allowed to leave."

Unconfirmed reports said up to 50 people had been placed on the travel ban.

Shiyam said the authorities were providing protection to Nasheed, but declined to say if he was under house arrest or if he was free to receive visitors.

"All I can say is that he is in a safe place and we are giving him protection for his own safety," he said.

According to Nasheed's brother, after the president resigned he was escorted to a family residence where he spent the evening.