By Kemal Aslan IZMIR (Reuters) - A three-year-old girl was rescued from a collapsed building in the western Turkish city of Izmir on Monday, nearly three days after a powerful earthquake in the Aegean Sea that has killed at least 94 people. 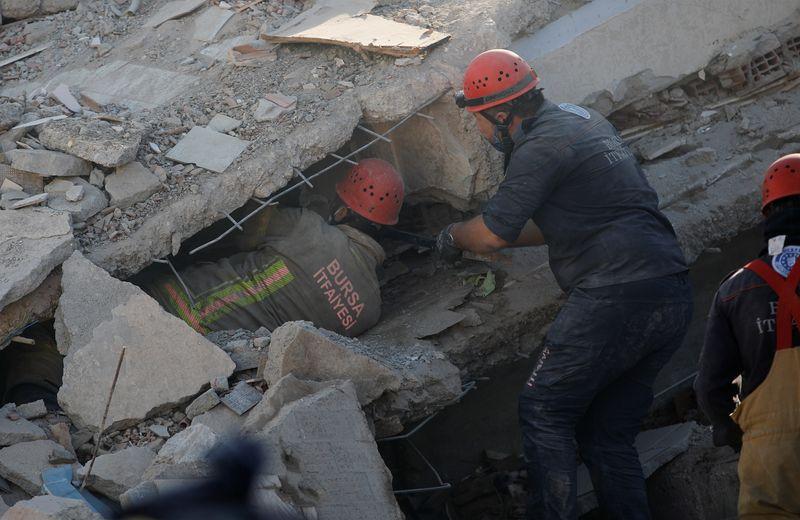 IZMIR (Reuters) - A three-year-old girl was rescued from a collapsed building in the western Turkish city of Izmir on Monday, nearly three days after a powerful earthquake in the Aegean Sea that has killed at least 94 people.

Rescuers pulled the girl, Elif, out of the rubble, then took her on a stretcher to an ambulance as emergency crews searched for survivors in eight other buildings.

Elif's two sisters and brother were found alive in the wreckage along with their mother on Saturday, but one of the children later died.

"A thousand thanks to you, my God. We have brought out our little one Elif from the apartment block," Mehmet Gulluoglu, head of Turkey's Disaster and Emergency Management Authority (AFAD), wrote on Twitter.

AFAD said the death toll had risen to 92 in Izmir - making it the deadliest quake to hit Turkey in nearly a decade. Two teenagers also died on the Greek island of Samos, authorities said.

A total of 994 people had been injured in Izmir and around 150 people were still being treated for their injuries, AFAD added.

Roughly 20 people were still believed to be in the rubble of one of the city apartment blocks where searches were continuing, broadcaster CNN Turk said.

State media later said authorities had launched proceedings against 52 people for illegal social media posts that spread rumours about the earthquake or criticized the government's response. Three were arrested and another 16 people were detained.

It was the deadliest earthquake in Turkey since one in the eastern city of Van in 2011 that killed more than 500 people. A quake in January this year killed 41 people in the eastern province of Elazig.

Turkey is crossed by fault lines and is prone to earthquakes. In 1999, two powerful quakes killed 18,000 people in northwestern Turkey.

Friday's earthquake, which the Istanbul-based Kandilli Institute said had a magnitude of 6.9, was centred in the Aegean Sea, northeast of Samos. There have been nearly 1,200 aftershocks, AFAD said.

More than 3,500 tents and 13,000 beds have been supplied to provide temporary shelter in Turkey, and nearly 8,000 personnel and 25 rescue dogs were involved in rescue and relief work, according to AFAD.