By Elizabeth Piper, William James and Kylie MacLellan LONDON (Reuters) - Three lawmakers from Britain's governing Conservatives quit over the government's 'disastrous handling of Brexit' on Wednesday, in a blow to Prime Minister Theresa May's attempts to unite her party around plans to leave the European Union. 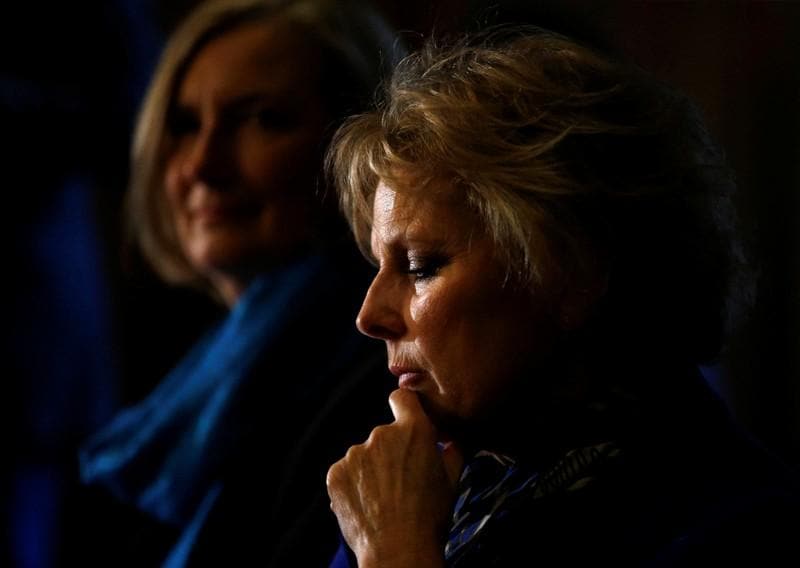 LONDON (Reuters) - Three lawmakers from Britain's governing Conservatives quit over the government's "disastrous handling of Brexit" on Wednesday, in a blow to Prime Minister Theresa May's attempts to unite her party around plans to leave the European Union.

The lawmakers, who support a second EU referendum and have long said May's Brexit strategy is being led by Conservative eurosceptics, said they would join a new independent group in parliament set up by seven former opposition Labour politicians.

The resignations put May in an even weaker position in parliament, where her Brexit deal was crushed by lawmakers last month when both eurosceptics and EU supporters voted against an agreement they say offers the worst of all worlds.

While the three were almost certain to vote against any deal, the hardening of their positions undermines May's negotiating position in Brussels, where she heads later to try to secure an opening for further work on revising the agreement.

With only 37 days until Britain leaves the EU, its biggest foreign and trade policy shift in more than 40 years, divisions over Brexit are redrawing the political landscape. The resignations threaten a decades-old two-party system.

"The final straw for us has been this government's disastrous handling of Brexit," the three lawmakers, Heidi Allen, Anna Soubry and Sarah Wollaston, said in a letter to May.

Soubry later told a news conference that the Conservative Party had been taken over by right-wing, pro-Brexit lawmakers.

"The truth is, the battle is over and the other side has won. The right-wing, the hard-line anti-EU awkward squad that have destroyed every (Conservative) leader for the last 40 years are now running the ... party from top to toe," she said.

May said she was saddened by the decision and that Britain's membership of the EU "has been a source of disagreement both in our party and in our country for a long time".

"But by ... implementing the decision of the British people we are doing the right thing for our country," she said, referring to the 2016 referendum in which Britons voted by a margin of 52-48 percent in favour of leaving the EU.

Asked what May would say to others considering resigning, her spokesman said: "She would, as she always has, ask for the support of her colleagues in delivering (Brexit)".

The three sat in parliament on Wednesday with a new grouping which broke away from the Labour Party earlier this week over increasing frustration with their leader Jeremy Corbyn's Brexit strategy and a row over anti-Semitism.

Another former Labour lawmaker joined their ranks late on Tuesday, and several politicians from both the main opposition party and Conservatives said they expected more to follow from both sides of parliament.

What unites most of the group of 11 is a desire to see a second referendum on any deal May comes back with, now that the terms of Brexit are known in detail - something the prime minister has ruled out.

For May's Brexit plan, the resignations are yet another knock to more than two years of talks to leave the EU, which have been punctuated by defeats in parliament, rows over policy and a confidence vote, which she ultimately won.

Britain's 2016 EU referendum has split not only British towns and villages but also parliament, with both Conservative and Labour leaders struggling to keep their parties united.

May has faced a difficult balancing act. Eurosceptic members of her party want a clean break with the bloc, pro-EU lawmakers argue for the closest possible ties, while many in the middle are increasing frustrated over the lack of movement.

Those who have resigned have long accused May of leaning too far towards Brexit supporters, sticking to red lines which they, and many in Labour, say have made a comprehensive deal all but impossible to negotiate.

But May will head to Brussels hoping that her team will get the green light to start more technical negotiations on how to satisfy the concerns of mostly Brexit supporters over the so-called Northern Irish backstop arrangement.

The "backstop", an insurance policy to avoid a hard border between the British province of Northern Ireland and EU member Ireland if London and Brussels fail to agree a deal on future ties, is the main point of contention in talks with Brussels.

British officials are hoping they can secure the kind of legal assurances that the backstop cannot trap Britain in the EU's sphere to persuade lawmakers to back a revised deal.

But May's argument she can command a majority in parliament if the EU hands her such assurances is getting weaker. A government defeat last week showed the eurosceptics' muscle.

One pro-Brexit Conservative lawmaker, Andrew Bridgen, said: "I would find it very difficult to accept a legal document from the same (party) lawyer whose definitive advice four weeks ago was that we could be trapped in the backstop in perpetuity."