By Harriet McLeod and Gene Cherry CHARLESTON, S.C./RALEIGH, N.C. (Reuters) - Thousands of people in the Georgetown, South Carolina, area were urged to evacuate their homes on Tuesday as rainwater unleashed by Hurricane Florence surged down rivers, threatening to submerge some neighbourhoods under 10 feet of water. Georgetown, which sits at the confluence of the Waccamaw, Great Pee Dee and Sampit rivers, was largely spared the initial fury of Florence, which came ashore on Sept. 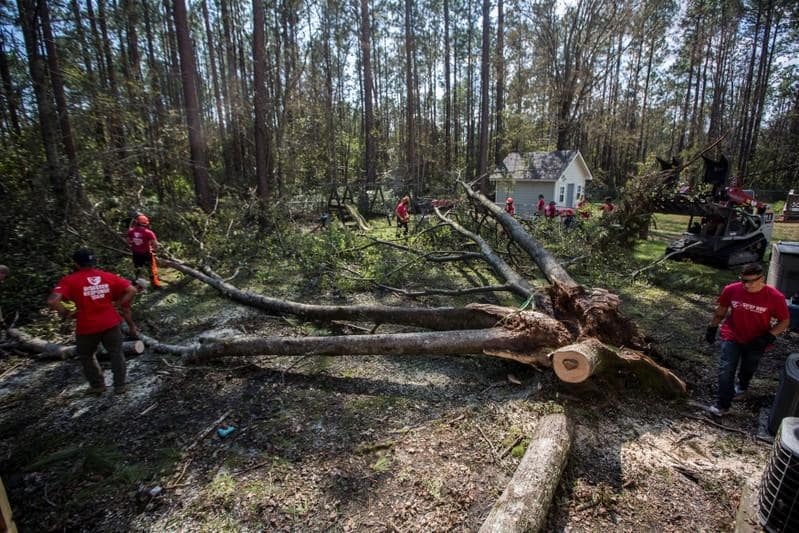 CHARLESTON, S.C./RALEIGH, N.C. (Reuters) - Thousands of people in the Georgetown, South Carolina, area were urged to evacuate their homes on Tuesday as rainwater unleashed by Hurricane Florence surged down rivers, threatening to submerge some neighbourhoods under 10 feet of water.

Georgetown, which sits at the confluence of the Waccamaw, Great Pee Dee and Sampit rivers, was largely spared the initial fury of Florence, which came ashore on Sept. 14 as a Category 1 hurricane, killing 46 people in three states.

But the port city of more than 9,000 stands in the path of what the National Weather Service has said could be significant flooding as water dumped by the storm system drains to the ocean.

"We are urging people to take this event seriously. We expect the flooding to be worse than Hurricane Matthew a couple years ago," said Randy Akers, deputy public information officer for Georgetown County. "We always urge people to prepare for the worst and hope for the best."

Akers said between 6,000 and 8,000 people have been exhorted to leave, but it was not clear how many had done so as of Tuesday evening. He said the county lacked authority to mandate evacuations.

"We do have some concerns that people are not taking this event as seriously as they should," he said.

Parts of Georgetown could be submerged in up to 10 feet (3 meters) of water in the coming days as the Pee Dee and Waccamaw rivers overrun their banks, the National Weather Service said, adding that the deluge threatened to cut off highways and isolate communities.

In neighbouring Conway County, the Waccamaw, which was already well above flood stage on Tuesday, could inundate a coal ash pond that holds more than 200,000 tons of toxic ash, according to Santee Cooper, South Carolina's state-owned electric and water utility.

Coal ash can contaminate water and harm fish and wildlife.

Santee Cooper said it removed more than 1 million tons of ash from the site in the past few years.

The Waccamaw was forecast to crest on Thursday at 22 feet in Conway and at 21.2 feet in Georgetown, a representative with the South Carolina Emergency Management Division said.

The potential flood zone encompasses some 3,500 homes in Georgetown, 37 miles (60 km) south of Myrtle Beach, and the coastal resort community of Pawleys Island where as many as 8,000 people live, Georgetown County spokeswoman Jackie Broach-Akers said.

Authorities were warning residents in harm's way with recorded telephone messages and home visits. The county opened two emergency shelters on Monday, and hotels in nearby Myrtle Beach were offering discounts to evacuees. Public schools were closed until further notice.

In North Carolina, Governor Roy Cooper said on Monday that seven rivers in the southeast part of the state were at major flood stages and three others at moderate flood stages.

Insured losses from Hurricane Florence will range from $2.8 billion to $5 billion, according to RMS, a risk modelling and analytics firm.

(Additional reporting by Brendan O'Brien in Milwaukee and Dan Whitcomb in Los Angeles; editing by Bill Trott and Leslie Adler)