By Marco Aquino LIMA (Reuters) - Thousand of Peruvians said goodbye on Thursday in Lima to ex-president Alan Garcia -- who killed himself this week - in the second of three days of national mourning declared by President Martin Vizcarra. Garcia shot himself in the head on Wednesday to avoid arrest in connection with alleged bribes from Brazilian builder Odebrecht, in the most dramatic turn yet in Latin America's largest graft scandal 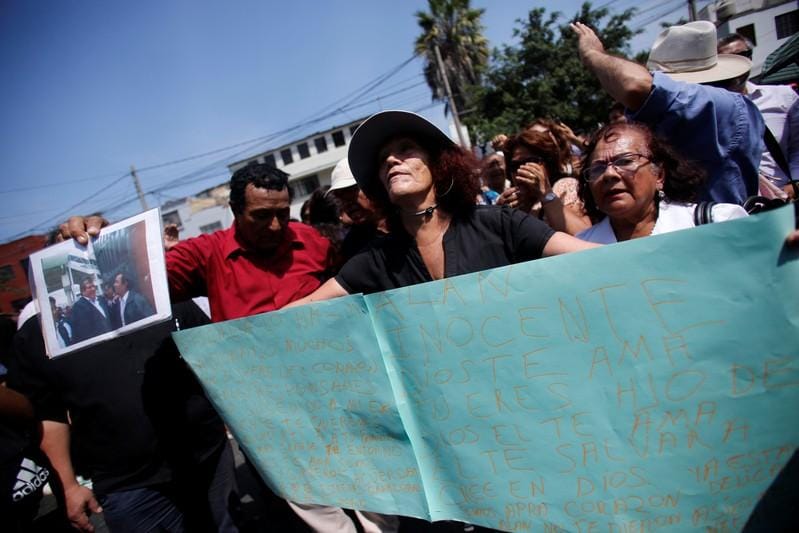 LIMA (Reuters) - Thousand of Peruvians said goodbye on Thursday in Lima to ex-president Alan Garcia -- who killed himself this week - in the second of three days of national mourning declared by President Martin Vizcarra.

Garcia shot himself in the head on Wednesday to avoid arrest in connection with alleged bribes from Brazilian builder Odebrecht, in the most dramatic turn yet in Latin America's largest graft scandal.

Friends, allies and leaders across the political spectrum paid homage to Garcia at the headquarters of his APRA party, one of Latin America's oldest political parties, and one which twice helped usher Garcia to the presidency.

Vizcarra ordered flags to be flown at half mast at the country's Congress and other public buildings to honour the ex-President and former lawmaker.

Despite that, some of Garcia's most tenacious allies cried out "Vizcarra is a murderer," at the wake, a nod to Garcia's recent critique that his prosecution was politically motivated.

A pugnacious politician considered one of Latin America's best orators, Garcia had long been dogged by graft allegations that he brushed off as baseless political smears.

But prosecutors investigating Brazilian builder Odebrecht gathered enough evidence to secure a judicial order this week to hold Garcia in pre-trial detention while they prepared charges against him, prompting the ex-president's suicide.

The investigation in Peru had picked up speed in recent months, with a judge ordering another former president, Pedro Pablo Kuczynski, to jail before trial in connection with the company last week.

The scandal had already touched the highest levels of Peru's ruling political class.

Ex-President Alejandro Toledo is fighting extradition from the United States after a Peruvian judge ordered him jailed in 2017, while another former leader, Ollanta Humala, spent nine months in pre-trial detention before he was released last year on appeal.