By Luis Jaime Acosta BOGOTA (Reuters) - Thousands marched in cities around Colombia on Friday in protest of the murder of hundreds of human rights activists, a spat of deadly violence which the country has been unable to quell in spite of a 2016 peace deal with Marxist rebels. The killings, attributed to a variety of armed groups, have drawn increasing criticism from the international community even though President Ivan Duque insists the number of murders has been reduced since he took office nearly a year ago. 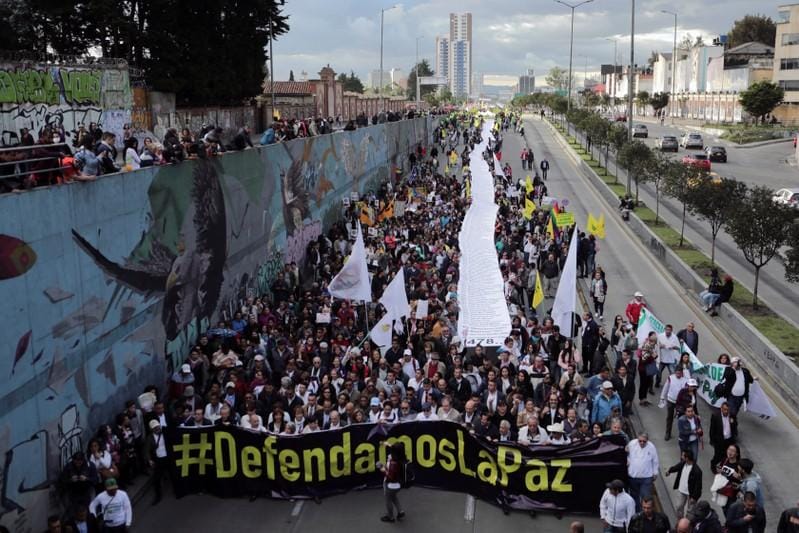 BOGOTA (Reuters) - Thousands marched in cities around Colombia on Friday in protest of the murder of hundreds of human rights activists, a spat of deadly violence which the country has been unable to quell in spite of a 2016 peace deal with Marxist rebels.

The killings, attributed to a variety of armed groups, have drawn increasing criticism from the international community even though President Ivan Duque insists the number of murders has been reduced since he took office nearly a year ago.

There is deep disagreement about the exact number of social leaders who have been killed. The human rights ombudsman says 486 were slain between the beginning of 2016 and mid-year 2019, while the attorney general's office pegs the figure at 292.

Friday's protests were organised after a shocking video, filmed just after community leader Maria del Pilar Hurtado was murdered in the northern province of Cordoba, was shared widely on social media last month. In the video one of Hurtado's four young children is seen screaming in grief near her body.

"We want an end to the selective and systematic murder of social leaders ... who are defending the right to live in their territories, the respect for biodiversity, respect for the peace accord," said protester Gloria Cuartas, who works for a group which promotes completion of the accord.

Cuartas spoke on the sidelines of the Bogota march, where protesters carried black and white photos of murdered activists and waved white flags.

Leaders are targeted by armed groups ranging from the National Liberation Army (ELN) guerrillas and fighters from the Revolutionary Armed Forces of Colombia (FARC) who refused to demobilize under the peace accord, to crime gangs founded by former right-wing paramilitaries.

Many of the murdered activists worked against drug trafficking or illegal mining and in favour of environmental or land restitution causes.

Some supported crop substitution programs meant to help farmers trade the planting of coca, the base ingredient in cocaine, for legal crops.

Duque, who was set to march in coastal Cartagena, promised this week he would work to reduce attacks on activists to zero.

Marches took place in more than 50 Colombian cities and towns and were also scheduled in dozens of foreign cities.

The polarizing deal between the government and the FARC ended that group's part in the more than five decade conflict, which has killed some 260,000 people.