Thousands of Colombians march against violence after deadly car bomb

By Steven Grattan and Luis Jaime Acosta BOGOTA (Reuters) - White flags and balloons filled streets nationwide as thousands of Colombians marched on Sunday to express outrage at violence after a car bomb blamed by the government on ELN rebels killed 20 police cadets and injured dozens. 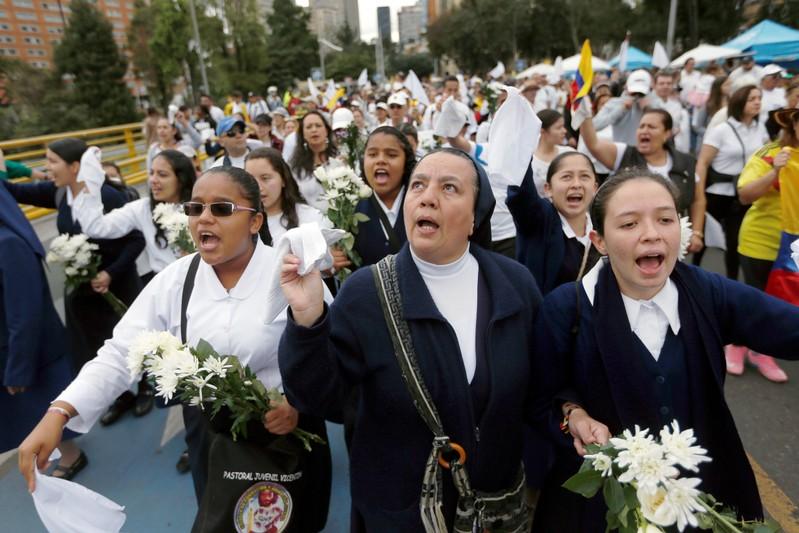 BOGOTA (Reuters) - White flags and balloons filled streets nationwide as thousands of Colombians marched on Sunday to express outrage at violence after a car bomb blamed by the government on ELN rebels killed 20 police cadets and injured dozens.

In last Thursday's attack, the deadliest in 16 years, a gray Nissan Patrol SUV carrying about 80 kilograms (176 lbs) of high explosive pentolite, broke through checkpoints onto the grounds of the General Santander School in the capital before it detonated, also damaging hundreds of apartments nearby.

The driver of the car, ELN explosives expert Jose Aldemar Rojas, was also killed in the blast, authorities said.

On Sunday, police officers lined the streets emotionally overwhelmed by the flood of support for their fallen comrades, cadets between 18 and 23 years old.

"It fills my heart to see so many marching and supporting us," said a tearful Javier Sosa, dressed in olive green uniform.

The bombing has heightened fears that a new wave of attacks had been launched in the Andean nation as a reaction to the right-wing president's stance.

Duque, who took office in August, pledged during his election campaign to toughen the fight against the group and drug-trafficking crime gangs that kill and kidnap civilians.

"This is a symbol of patriotism, public spirit and union," Duque told Reuters as he marched.

"Today we're here as ordinary citizens to reject terrorism and violence. We're honoring the memory of those heroes, of those boys who were vilely murdered."

The ELN, formed by radical Catholic priests in 1964, has not claimed responsibility or issued a public statement, but Duque's demand to arrest its peace negotiators makes it almost impossible for talks to restart.

Cuba has sidestepped Duque's request and said it will abide by the rules set out before talks began.

The negotiation protocols provide security guarantees for guerrilla leaders to return to Colombia and protection from military attacks for an agreed period.

Composed of some 2,000 fighters and considered a terrorist organization by the United States and European Union, the ELN began peace talks with the government of former President Juan Manuel Santos in early 2017, but they were suspended by Duque until the group frees its hostages and stops attacks.

Car bombs were frequently used during decades of civil war but the worst of the violence, which killed some 260,000, ended in 2016 when peace was signed with FARC.