By Alkis Konstantinidis and Lefteris Papadimas LESBOS, Greece (Reuters) - Thousands of migrants were left without shelter on Wednesday after overnight fires gutted their overcrowded camp on the Greek island of Lesbos, and authorities warned that some asylum seekers who tested positive for COVID-19 could spread the virus. 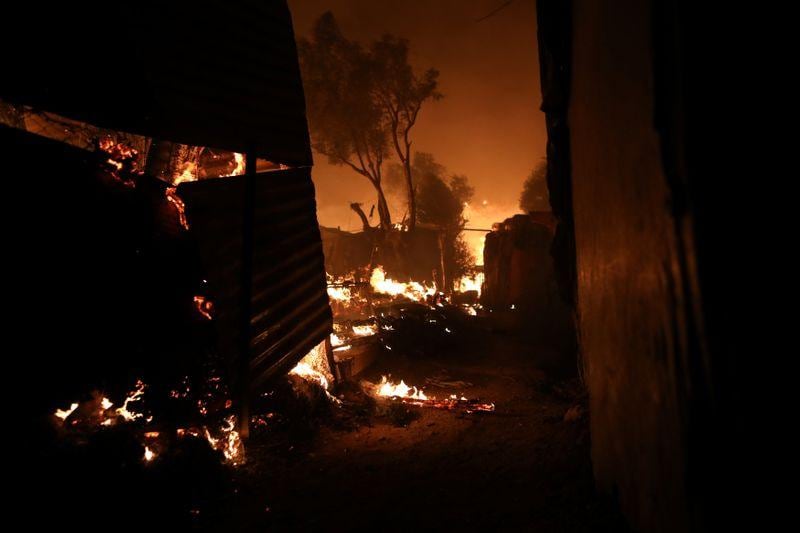 By Alkis Konstantinidis and Lefteris Papadimas

LESBOS, Greece (Reuters) - Thousands of migrants were left without shelter on Wednesday after overnight fires gutted their overcrowded camp on the Greek island of Lesbos, and authorities warned that some asylum seekers who tested positive for COVID-19 could spread the virus.

Authorities said they were investigating arson at the sprawling camp. Early Thursday evening, a new fire broke out, sending those who remained on site fleeing.

A Reuters witness reported seeing a 'huge' column of black smoke emerging from the camp. Live images showed people running down a road carrying children and infants, many using prams as wheelbarrows for possessions in bin bags as a fire raged in a gully.

Athens declared a state of emergency on Lesbos and sent police reinforcements to the island to help keep order.

Migration Minister Notis Mitarachi said about 2,000 people affected by the fires would be temporarily put on a ferry boat and two ships of the Greek navy. It was not immediately clear where the rest of the Moria population were.

"The situation in Moria cannot go on (as it is) because it is simultaneously a public health and national security issue," Prime Minister Kyriakos Mitsotakis said in a televised address, adding that managing migrant flows was a "European problem".

Authorities were investigating whether Tuesday night's fires were started deliberately after COVID-19 tests led to the isolation of a number of refugees.

"There was not just one but many fires in the camp. Migrants threw stones at firefighters trying to put out the fires," Constantine Theophilopoulos, fire brigade chief for the northern Aegean, told ERT TV.

The camp had been placed under quarantine last week after an asylum-seeker tested positive for COVID-19. As of late Monday 35 migrants had been confirmed as having the virus.

EU Home Affairs Commissioner Ylva Johansson said the European Union had agreed to fund the immediate transfer of 400 unaccompanied children and teenagers to the Greek mainland.

Aid groups have long criticised conditions at the camp, which hosts more than four times its stated capacity, saying it is impossible to implement social distancing and basic hygiene measures there.

The UN Refugee Agency, UNHCR, said it had received reports of tensions between people in neighbouring villages and asylum seekers who were trying to reach Mytilini town.

"Events in Moria last night are unthinkable but tragically predictable as the dire situation on the islands has gone on for far too long," said Dimitra Kalogeropoulou, International Rescue Committee Greece Director.

The UNHCR has previously said nearly half of migrants now detained on the Greek islands are from Afghanistan and a further 19% are from Syria. Lesbos, which is just off the Turkish coast, was on the front line of Europe's migrant crisis in 2015-16.

Greek authorities put Lesbos under a state of emergency for four months for public health reasons, allowing them to mobilise all forces to support the asylum seekers and island residents.

Mytilini mayor Stratis Kytelis said migrants would have to be moved or housed on ships to prevent the spread of COVID-19.

German Foreign Minister Heiko Maas described the fires as "a humanitarian disaster", and said EU member states should be ready to take in some of the refugees from the camp.

Boris Pistorius, interior minister of the north German state of Lower Saxony and an influential figure in Germany's Social Democratic Party (SPD), said it was time to shut the Moria camp.

"This overcrowded camp is the symbol of the failure of Europe's asylum policy," he said.