Brussels: The Latest on explosions at Brussels airport and metro station (all times local):

Florence Muls, a spokeswoman for the Brussels Airport, says a third bomb has been neutralized at the airport after two other bombs killed at least 10 people there Tuesday morning.

Muls told The Associated Press the third bomb was dispensed of "with a controlled action" once the chaos of the first explosives had eased somewhat.

Elsewhere in the Belgian capital, anti-bomb squads detonated suspicious objects in at least two locations — the Maelbeek subway station and close to Brussels University a few miles further away. Authorities said those two did not contain explosives. 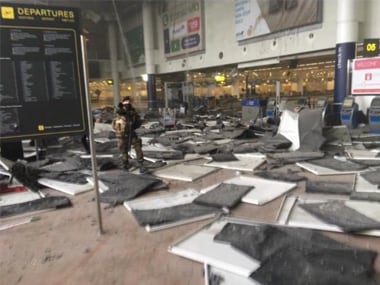 A U.S. official has told the AP the explosives in Brussels appear sophisticated, and investigators will examine them to see if they bear the same characteristics to those used in the Paris attacks last year.

Putin began by offering condolences to the families of the victims in Brussels. He added "we have repeatedly discussed the issues related to the fight against terrorism, and it's possible to efficiently combat it only by united efforts."

Some other Russian officials and lawmakers have criticized Western reluctance to cooperate with Moscow on fighting terrorism amid the strain in Russia-West ties over the Ukrainian crisis.

The White House says President Barack Obama has expressed his condolences to Belgium and its people during a telephone conversation with Prime Minister Charles Michel following deadly terrorist attacks at the airport and a subway station.

Obama also offered assistance with the investigation and with bringing the perpetrators to justice.

The White House says the president reiterated U.S. support for the people of Belgium, NATO and the European Union. And he pledged the full cooperation by the U.S. in efforts to end terrorism.

Obama placed the call from Havana, where he was closing a historic three-day visit on Tuesday.

Airport to remain closed through Wednesday

The head of the Brussels Airport says the airport will remain closed at least through Wednesday.

Airport CEO Arnaud Feist says two bombs ripped through the airport's departure hall, killing at least 10 people there and injuring scores. Feist said it was still too early to assess the damage to the terminal and indicated the airport could be closed even longer.

He said thousands of passengers and personnel were at the airport during the morning rush hour when the attacks hit Tuesday.

The exact number killed at the airport is still unclear. Regional governor Lodewijk De Witte says there are "more than 10 deaths" there.

European Union leaders are pledging to tackle the terrorism threat with "all necessary means" after attacks on Brussels — the EU capital — that killed at least 31.

The heads of state and government of the 28-nation union said in a statement that Tuesday's attack "only strengthens our resolve to defend European values and tolerance from the attacks of the intolerant."

They pledged to be "united and firm in the fight against hatred, violent extremism and terrorism."

The statement didn't elaborate on possible EU measures in response to the attacks.

Plea to media on investigations

The Belgian federal prosecutor's office has made a new plea to the media not to spread any information about the investigation in the wake of the bombing attacks early Tuesday.

Belgian authorities had already made a similar plea during the days following the Nov. 13 Paris attacks when they were certain an attack in Brussels was imminent. It was largely followed by the media.

On Tuesday, the office again asked the media to immediately desist from spreading information from the ongoing investigation.

The Islamic State group claimed responsibility for the attacks in Brussels, saying its extremists opened fire in the airport and "several of them" detonated suicide belts.

The posting in the group's Amaq news agency said another suicide attacker detonated in the metro.

The posting claimed the attack was in response to Belgium's support of the international coalition arrayed against it.

People can start moving around Brussels once more after being told to stay in place for hours after bombing attacks Tuesday morning at the airport and on a subway station.

Peter Mertens of the Belgian crisis center says "the threat is still real and serious" of more attacks.

But he says air traffic at Brussels' Zaventem airport "remains closed for the day under any circumstance" but people in the Belgian capital can start walking outside again and train stations are reopening.

At least 31 people were killed and nearly 190 wounded Tuesday after bombs went off in Brussels airport.

Florence Muls, the Brussels airport communications manager, is defending the security at the airport.

She tells The Associated Press that the terminal zone is open. That means there are no checks on luggage or passengers at the entry to the terminal — and European rules do not require closing it off.

She says the airport is does not have the ability or the mandate to impose controls at the airport terminal entry.

IS planning attacks for several months

An Iraqi intelligence official says sources in the Syrian city of Raqqa have told them that the Islamic State group has been planning terrorist attacks in Europe for two months which would "target airports and train stations."

The official tells The Associated Press on Tuesday that Iraqi officials told European countries about the plans "but Brussels was not part of the plans" at the time.

He says IS militants changed the operation and moved it to Brussels "because of the detention of Salah Abdeslam" — the Paris attacks suspect arrested Friday in Brussels.

Another senior Iraqi intelligence official said "Daesh (IS) was behind this operation and it was planned in Raqqa two months ago and there are three suicide attackers who will carry out another attack."

The officials spoke on condition of anonymity since the investigation was ongoing.

Two explosions ripped through Brussels airport Tuesday during the morning rush hour as hundreds of passengers were trying to check in. Airport authorities said the explosions caused several injuries.

Airport spokeswoman Anke Fransen said: "There were two blasts in the departure hall. First aid team are in place for help."

Passengers were led onto the tarmac and the crisis center urged people not to come to the airport.

The explosions happened only days after the prime suspect in the Paris attacks Salah Abdeslam was arrested in Brussels.