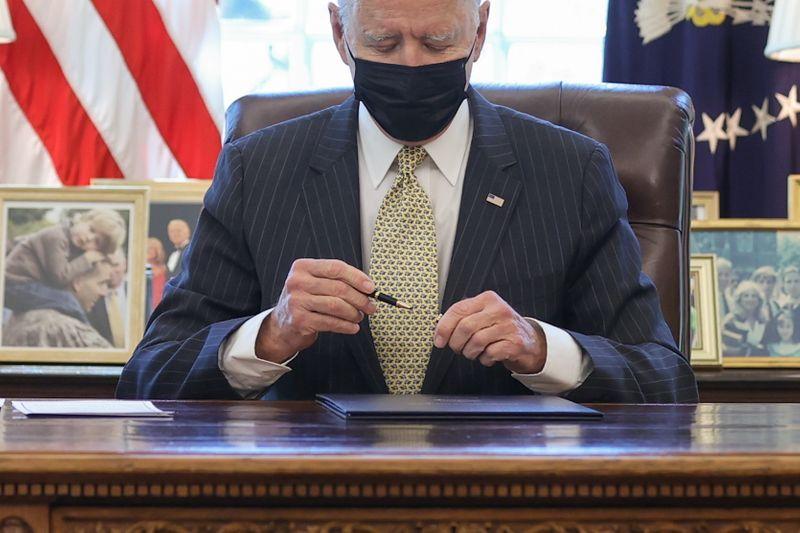 By David Morgan and David Shepardson

WASHINGTON (Reuters) - U.S. President Joe Biden's plan to pay for his $2 trillion infrastructure plan with higher corporate taxes faces hurdles in Congress from Republicans who say it will kill jobs and from some of his fellow Democrats who want a bigger write-off for state and local taxes.

The plan, which Biden will unveil at an event in Pittsburgh later on Wednesday, would hike the U.S. corporate tax rate to 28%, from its current 21%, to secure more revenue from corporations that have used offshore tax shelters and other measures to reduce their tax burdens.

Senate Minority Leader Mitch McConnell said he was "not likely" to support the package if it included those tax hikes.

"If it's a Trojan horse for a massive tax increase, put me down as highly skeptical, if that's all in one package and it's a take-it-or-leave-it package," McConnell told reporters in Erlanger, Kentucky.

McConnell said he spoke to Biden about the plan on Tuesday.

In the House of Representatives, Republicans on the tax-writing Ways and Means Committee said the proposed tax hikes would hurt U.S. job creation.

"The proposal is dangerously misguided when it comes to how to pay for infrastructure," the U.S. Chamber of Commerce said in a statement, and warned the tax hikes would "slow the economic recovery and make the U.S. less competitive globally."

The tax provisions would roll back many of former President Donald Trump's 2017 tax cuts for businesses and the wealthy.

Biden's overall infrastructure plan charts a dramatic shift in the direction of the U.S. economy, with investments in traditional projects like roads and bridges along with climate change and human services like elder care.

The president will need solid backing from Democrats in both houses of Congress if Republicans uniformly oppose the legislation as they did his $1.9 trillion COVID-19

The White House said the tax hikes might move through Congress "alongside" the spending provisions, hinting that the two could pass separately. A House Democratic aide said the legislative plan remains up in the air, with the White House leaving the strategy to congressional leaders.

Some moderate Democrats hope to reverse Trump's cap on the federal income tax deduction for state and local taxes, or SALT, which is felt most acutely in Northeastern states with higher taxes.

"We say, no SALT, no deal," three House Democrats from New York and New Jersey said this week.

Democrats control the House by a margin of 219 to 211, so they will need to stay united if no Republicans support the plan. The party has not yet decided how to proceed, a House Democratic aide said.

Democratic House Speaker Nancy Pelosi told her caucus this week she wants to pass the package by July 4, but she also said that the target date could slip to later in the month.