The Great British Loot: From the Kohinoor to the Great Star of Africa, jewels and art 'stolen' by the Empire

It is not just the Kohinoor. The colonisers have looted from Africa to Greece. Now voices demanding the return of stolen art and jewels by Britain have grown louder since the death of Queen Elizabeth II

When Queen Elizabeth II passed away at 96 last Thursday, the United Kingdom and the world mourned the loss of Britain’s longest-serving monarch. However, her passing away also saw many tweeting about the crown jewels, with #Kohinoor becoming a trending topic.

A week has passed since Queen Elizabeth II’s demise — Charles III has ascended to the throne — and there are now calls from people of India, Africa and other nations that the royal family surrender artefacts obtained by the British Empire.

People on social media argue that the acquisition of these jewels and artefacts are steeped in controversy given the history of British colonialism and hence, they should be returned to their rightful owners.

Shortly after the Queen’s demise, Twitter lit up with many calling for the return of the Kohinoor — also spelled Koh-i-noor — which is part of the British crown jewels.

Journey of #Kohinoor 💎: From India to England.

It should come back to its origin, the least UK can do towards the centuries of exploitation, opression, racism, slavery inflicted on people of the Indian subcontinent. pic.twitter.com/W7zHBLKOaf

In fact, Last Week Tonight host John Oliver’s bit on the diamond, performed some five years, went viral on all social media platforms with even actors such as Raveena Tandon jumping on to the bandwagon.

The Kohinoor, which means “Mountain of Light,” was originally about 186 carats, and while its exact origins are unknown, it was most likely discovered in South India in the 13th century.
According to the website of the UK’s royal palaces, the Kohinoor was unearthed from the Golconda mines in central southern India before it was handed to the British monarchy in 1849.

Britain came in to possession of the Kohinoor when the East India Company took the jewel from deposed 10-year-old Maharaja Duleep Singh in 1849.

Rumored to be cursed for men, it was initially worn as a brooch by Queen Victoria and later mounted in the crowns of Queen Alexandra and Queen Mary. It is currently set in a crown that was created for Queen Elizabeth, the Queen Mother, for her coronation as queen consort in 1937. She wore it again at the coronation of her daughter, Queen Elizabeth II, in 1953. It is on public display in the Jewel House at the Tower of London and will reportedly be worn by Camilla, Queen Consort, at King Charles III’s coronation. 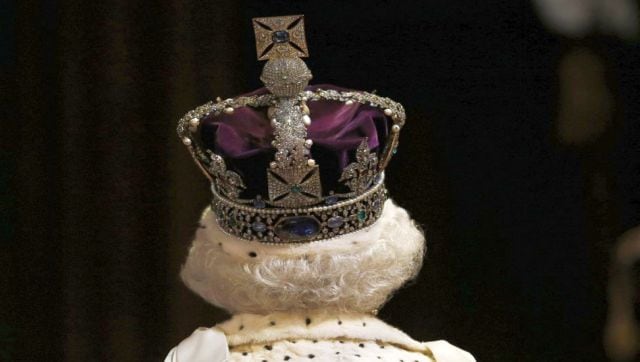 Kohinoor is a 105-carat gemstone which means “mountain of light” in Persian. The stone is set in the Queen's crown which is on display in the Tower of London. AFP

The diamond has been at the centre of political and legal controversy in India amid disputes over its ownership, with claims coming not just from India but Pakistan as well.

Danielle Kinsey, an assistant professor of history with a focus on the history of 19th century Britain and empire at Carleton University in Ottawa, Ontario while speaking to NBC News observed that it is only a matter of time before the Kohinoor is surrendered.

“To be purely pragmatic about it, at some point the monarchy will understand that keeping the diamond is more of a public relations liability for them than an asset,” she said to NBC News. “I think the same is true for many, many looted artefacts in Britain today and the institutions that house them. Also, it’s the right thing to do if the royal family is serious about making apologies for the ills of British imperialism and how they profited from it.”

While most know of the Kohinoor diamond and growing calls for its return to India, there are many in South Africa who are calling for the return of the Great Star of Africa or Cullinan I diamond.

Known as the Great Star of Africa or Cullinan I, it is the biggest stone cut from the Cullinan diamond, which was discovered in South Africa in 1905 in a mine owned by its namesake, Thomas Cullinan, and is the largest gem-quality uncut diamond ever found.

Today, the Great Star of Africa is mounted in the Sovereign’s Sceptre with the Cross. Queen Elizabeth II has been seen in many portraits wearing these diamonds. File image of Britain's Queen Elizabeth II wearing the bejeweled Imperial Crown and carrying the Orb and Scepter with Cross, leaves Westminster Abbey, London, at the end of her coronation ceremony. AP

According to the Royal Collection Trust, which oversees the royal collection of the British royal family, the Cullinan diamond was presented to King Edward VII (the British monarch at the time) in 1907, two years after its discovery in a private mine in South Africa’s old Transvaal province.

However, many South Africans reject this narrative. A University of South Africa professor of African politics, Everisto Benyera, told CNN, “Our narrative is that the whole Transvaal and Union of South Africa governments and the concomitant mining syndicates were illegal. Receiving a stolen diamond does not exonerate the receiver. The Great Star is a blood diamond... The private (mining) company, the Transvaal government, and the British Empire were part of a larger network of coloniality.”

We further call upon His Majesty King Charles to return the Diamonds stolen in South Africa starting with the Star of Africa- the Cullinan worth $400 Million with immediate effect. #QueenElizabethII #RoyalFamily #PhalaPhalaFarmGate #PhalaPhalaPicket #LondonBridgeIsDown pic.twitter.com/WV9CtQclxH

Activist Thanduxolo Sabelo was quoted as telling local media, “The Cullinan Diamond must be returned to South Africa with immediate effect. The minerals of our country and other countries continue to benefit Britain at the expense of our people.”

There’s also a petition being circulated asking for the Great Star of Africa to be returned and displayed in a South African museum. It has received the signatures of 6,000 people already.

The issue of colonial-era loot and Britain’s moral obligation to return heritage to communities they were taken from, is not new.

Greece has been demanding for the return of the Elgin Marbles since 1925.

For those who don’t know, the Elgin Marbles, also known as the Parthenon Marbles, are a collection of different types of marble architectural decoration from the temple of Athena (the Parthenon) on the Acropolis in Athens. Today, they sit inside the British Musuem.

According to many media reports and archives in history, in 1803, Britain’s Lord Elgin allegedly removed the marbles from the Parthenon’s decaying walls in Greece and transported them to London. This is also the reason those precious marbles are called Elgin Marbles. A section of marble frieze sculpture (438-432 BC) from the Parthenon in Athens, part of the collection that is popularly referred to as the Elgin Marbles, is displayed at British Museum. AFP

The British Museum on their website state, “Lord Elgin was the British Ambassador to the Ottoman Empire and successfully petitioned the authorities to be able to draw, measure and remove figures.

“He was granted a permit (firman), and between 1801 and 1805 acting under the oversight of the relevant authorities, Elgin removed about half of the remaining sculptures from the ruins of the Parthenon. He also obtained permission to have removed sculptural and architectural elements from other buildings.

“All of Elgin’s collection of antiquities was then transported to Britain. His actions were thoroughly investigated by a Parliamentary Select Committee in 1816 and found to be entirely legal, prior to the sculptures entering the collection of the British Museum by Act of Parliament.”

Greece has been demanding for the return, with even actor George Clooney and his wife Amal campaigning on their behalf.

In July, the deputy director of the British Museum proposed a “Parthenon partnership” with Greece that could see the marbles returned to Athens after more than 200 years.

As Indians call for the return of the Kohinoor, the Egyptians want to bring back the Rosetta Stone, which is currently on display at the British museum.

The Rosetta Stone, a granodiorite stele, has unlocked the mysterious hieroglyphic script of ancient Egypt. It is perhaps the most famous piece of rock in the world. As the story goes, the Rosetta Stone was found in Memphis, Egypt in 1799 by a French military officer before being seized by British forces in Alexandria and shipped to England two years later. In 1802, the stele, which enabled hieroglyphs to be deciphered, was given to the British Museum. Since then, the stone has been on display at the museum, with only one break during the World War I, in 1917, when the museum moved important objects to prevent damage from heavy bombing in London.

Now, Egyptian archaeologist Zahi Hawass has initiated a campaign for the return of the atefact. “The Rosetta Stone is the icon of Egyptian identity. The British Museum has no right to show this artefact to the public,” he was quoted as telling The National, adding, ““They left Egypt completely illegally and they should come back,” he said.

The Benin Bronzes are a group of thousands of objects that were taken from the kingdom of Benin, in what is now Nigeria, in 1897. (Their exact number is unknown, though it is believed to exceed 3,000.) These objects — including figurines, tusks, sculptures of Benin’s rulers, and an ivory mask —were looted by British troops, and have since been dispersed around the world, with the bulk of the works now residing with state museums in Europe.

But, how did the British come into their possession. It is said that the death of James Phillips, an unarmed British explorer, on the orders of Benin’s ruler Oba Ovonramwen caused the loot. 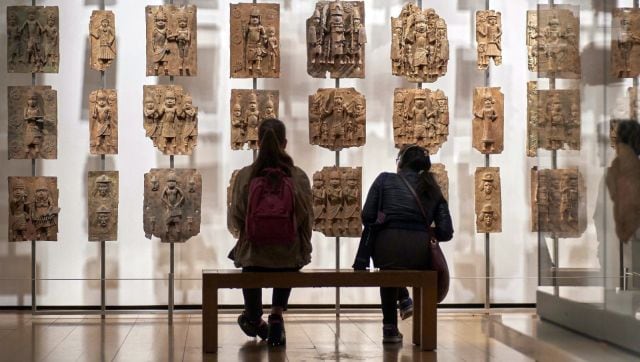 The Benin Bronzes are a group of thousands of objects that were taken from the kingdom of Benin, in what is now Nigeria, in 1897. These objects have since been dispersed around the world, with the bulk of the works residing at the British Museum. Image Courtesy: britishmuseum.org

Artnews.com reports that to avenge Philips’ death, the British Empire sent troops to steal artifacts from the kingdom, and they walked away with thousands of priceless objects.

Today, Nigerians have been demanding that the figurines be returned to them, as they are a window into the African art of those times and it’s just unfair that the locals have to travel to London if they want to take a look at them.

A senior civil servant alleged that Gavin Williamson, a minister of state without portfolio, subjected them to sustained bullying, telling the individual to 'slit your throat' on one occasion and 'jump out of the window' on another

Economic experts agree on the massive scale of the challenge, even as they hold out the prospect of a free trade agreement with India as a potential generator of much-needed economic growth