Bangkok: Floods in Thailand's northern and eastern regions have killed at least 23 people and left two missing with damage estimated at around $300 million. 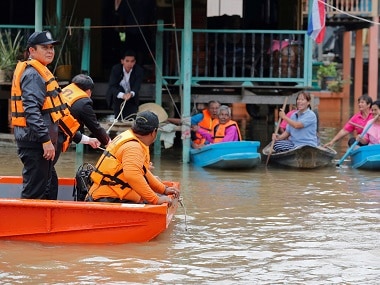 Ten provinces have been flooded due to heavy rains, affecting 721,500 people, the interior ministry said Thursday.

It said that around 1,554 square kilometers (600 square miles) of rice farming land has been affected. The hardest hit is Sakon Nakhon province, around 640 kilometers (400 miles) east of Bangkok, which has recorded nine deaths. Schools and department stores in the province remain shut.

"It directly affects the local economy as the city has been submerged for over five days," said Mongkol Tunsuwan, the president for the North Eastern region of the Thai Chamber of Commerce.

Prime Minister Prayuth Chan-ocha visited flood victims in Sakon Nakhon on Wednesday and said that the government was working on a big project to fix flooding, referring to a proposed bill on water management.

Jirapan Assawathanakul, chief of the Thai General Insurance Associated, said that his association estimated that insurance companies would have to pay around $30 million in compensation for disaster relief. A total loss is estimated at at least $300 million.