BANGKOK (Reuters) - Hundreds of protesters gathered outside Thailand's parliament after Prime Minister Prayuth Chan-ocha and nine ministers survived a parliamentary no-confidence motion on Saturday after a four-day censure debate. 'It was a disappointment, but expected,' protest leader Attapon Buapat said. 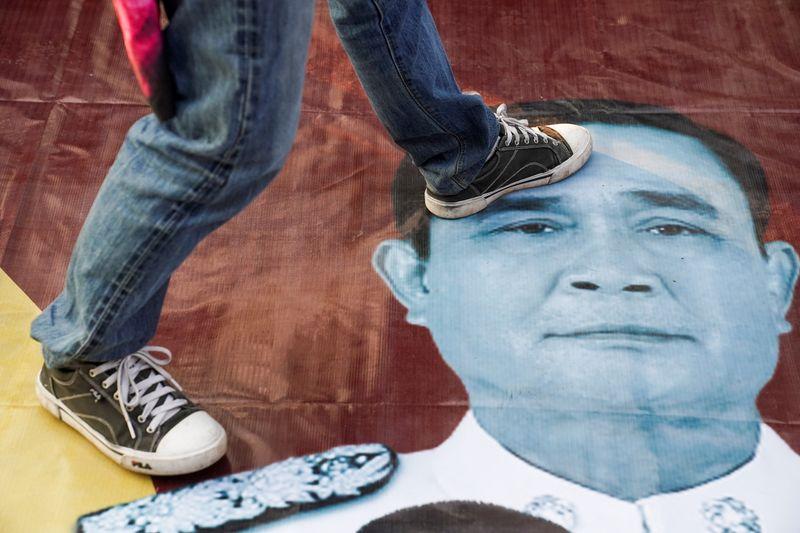 "It was a disappointment, but expected," protest leader Attapon Buapat said.

Over 1,000 protesters rallied outside the parliament gates. Organisers gave assurances the protest would not turn violent.

"We want a peaceful protest," protest leader Panusaya "Rung" Sithijirawattanakul told reporters after speaking to the police. "There is no reason for police to break up this demonstration."

Earlier, lawmakers voted in favour of Prayuth and other ministers, which had been widely expected.

Opposition lawmakers have taken aim at what they say is a slow government roll-out of the coronavirus vaccine and at its economic policies, vowing to continue investigating.

"We've opened a wound and now will pour salt on it," Pita Limjaroenrat, head of the Move Forward Party told reporters after the vote.

Prayuth, a former chief of the armed forces, overthrew an elected prime minister in 2014 and stayed in office after a 2019 election that his rivals said was badly flawed.

The government has said the elections were free and fair.

Prayuth was expected to survive Saturday's vote due to his coalition government's majority in the lower house.

"The debate went well, but the government must continue its work," Prayuth said in a podcast after the vote. "I would like to ask all Thais to work together to bring the country forward."

The no-confidence motion came as pro-democracy protests returned after a lull brought on by a second outbreak of COVID-19.

"Some 4,000 officers have been prepared," police deputy spokesman Kissana Pattanacharoen said, adding that the rallies were violating an emergency decree to control the coronavirus outbreak. "Police duty is to maintain order," he said when asked if there would be use of force.

Earlier this month, protesters demanding the release of activists scuffled with police.

"It's a critical moment in Thailand. We cannot wait, we don't want people to think this is just on Twitter or Facebook," 20-year-old student Ngamluk Montim told Reuters. "We are coming out to raise our voice. This is just the start."