By Panu Wongcha-um BANGKOK (Reuters) - Around 2,500 Thai protesters on Saturday evening demanded the resignation of the government and the dissolution of parliament, defying a coronavirus ban on gatherings in one of the largest street demonstrations since a 2014 military coup. People at the student-led rally near Bangkok's Democracy Monument cited a litany of complaints against the year-old civilian government of Prime Minister Prayuth Chan-ocha, the former army chief who ousted an elected government six years ago. 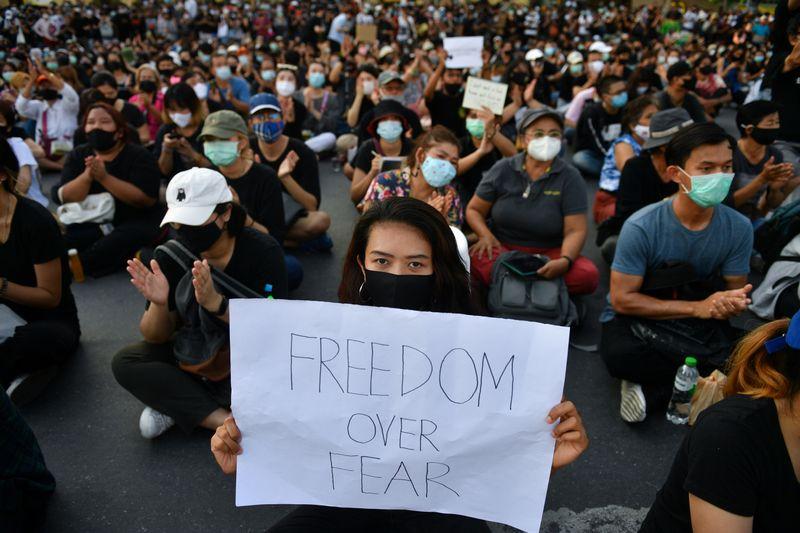 BANGKOK (Reuters) - Around 2,500 Thai protesters on Saturday evening demanded the resignation of the government and the dissolution of parliament, defying a coronavirus ban on gatherings in one of the largest street demonstrations since a 2014 military coup.

People at the student-led rally near Bangkok's Democracy Monument cited a litany of complaints against the year-old civilian government of Prime Minister Prayuth Chan-ocha, the former army chief who ousted an elected government six years ago.

Organisers issued three demands: the dissolution of parliament, an end to harassment of government critics, and amendments to the military-written constitution that critics say virtually guaranteed victory for Prayuth's party in elections last year.

"How can we be OK with the lack of democracy like this?" student activist Tattep Ruangprapaikit told the crowds.

There were also some veiled public references at the protest to the powerful Thai monarchy, despite a law forbidding criticism of the king. Such references would once have been unthinkable.

Police were on standby but did not move to stop the protest. The monument was cordoned off with signs reading: "No entry without permission. Maintenance in progress."

The protests started with student groups, but during the evening hundreds more arrived to join, swelling the numbers to about 2,500, according to organisers and estimates by reporters on the scene.

The demonstration dispersed at about midnight, but organisers said they would return to the streets in two weeks if their demands were not met.

Public opposition to Prayuth has been growing in recent months.

Since last year's election, a court has dissolved the second-largest opposition party, giving his ruling coalition firmer control in parliament.

Thailand is officially a constitutional monarchy, but insulting the king is punishable by up to 15 years in prison, and many conservatives view the monarchy as sacrosanct.

Some signs and speeches at Saturday's protest made veiled references to the monarchy.

"This is our country, but whose home is in Germany?" said one of the student leaders on a small stage set up on the street.

King Vajiralongkorn has an estate in Germany, where he spends much of the year.

A protest sign read "Lost faith is definitely not a crime!!! #Thiwakorn", in a reference to a separate protest in Thailand's northeast on Friday in support of a man who was committed to a psychiatric hospital after he wore a T-shirt saying he had lost faith in the monarchy.

Another banner said "The People’s Party Isn’t Dead" - a reference to the political party whose revolution ended absolute royal rule in 1932.

Prayuth last month publicly warned political activists not to risk their futures by criticising the monarchy.