BANGKOK (Reuters) - Thai authorities arrested a student leader on Friday over an anti-government protest last month, police said, just a few days before a big demonstration scheduled for Sunday. Student groups have rallied almost daily around the country since July 18, calling for an end to military influence over Thai politics after a disputed election last year kept junta leader Prayuth Chan-ocha as prime minister five years after he first took power in a 2014 army coup. 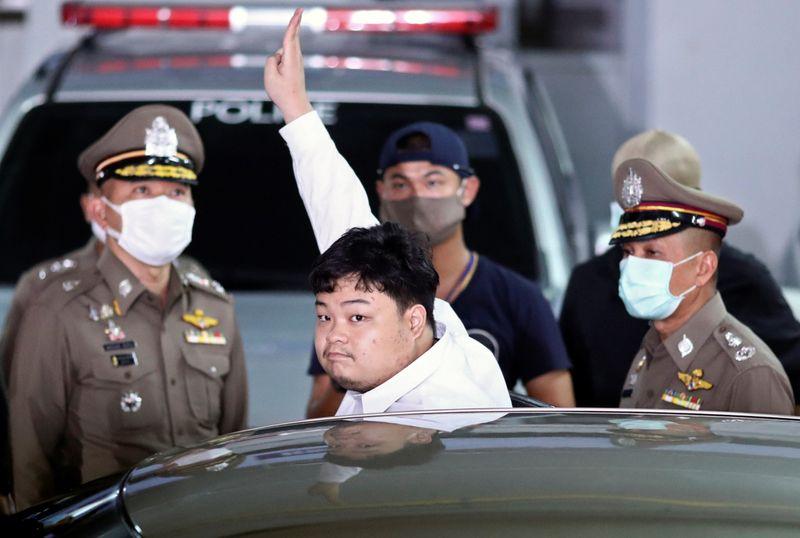 Student groups have rallied almost daily around the country since July 18, calling for an end to military influence over Thai politics after a disputed election last year kept junta leader Prayuth Chan-ocha as prime minister five years after he first took power in a 2014 army coup.

Parit "Penguin" Chiwarak, 22, was arrested on the outskirts of Bangkok while traveling to a protest, a video posted on his Facebook page showed.

"I would like to invite you to go to the investigating officers responsible for this case," said a man who identified himself as a member of the Bangkok Metropolitan Police in the video, citing a court's arrest warrant before at least four other men physically carried Parit into a car.

The video was apparently shot by a friend of Parit's and posted to his page.

"Once we are done, we will take him to a court to request for pre-trial detention," he said.

Somprasong said Parit will be charged for breaching internal security by "raising unrest and disaffection," as well as for breaching coronavirus regulations banning public gatherings by helping organise a demonstration on July 18.

Human Rights Watch said the charges should be dropped and he should be immediately released.

Prime Minister Prayuth has appealed for unity in light of the student-led protests, and said the government has been restrained with the protesters.

The student protest groups plan to stage a large protest on Sunday to intensify their demand to reform the military-backed constitution and call for new elections.