Bangkok: Thailand's embattled Prime Minister Yingluck Shinawatra easily won a no-confidence vote in parliament on Thursday but failed to pacify anti-government protesters who rejected calls for talks and massed by the thousands in the capital. 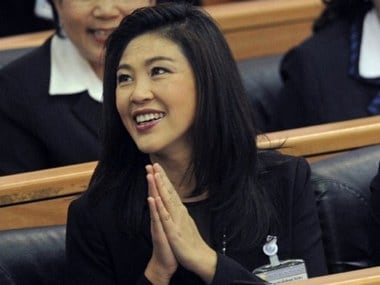 That's not so easy. The numbers of the protesters appear to have dwindled since the start of the week, raising questions over what's next in a conflict that broadly pits Bangkok's middle classes against the mostly rural supporters of Thaksin, who was ousted in a 2006 military coup.

Yingluck, who won a 2011 election by a landslide to become Thailand's first female prime minister, called on the protesters to clear the streets and enter into talks to avoid confrontation, saying Thailand's economy was at risk after demonstrators occupied the Finance Ministry on Monday.

"The government doesn't want to enter into any political games because we believe it will cause the economy to deteriorate," she said in a televised address.

In a sign support for the protest could be ebbing, police spokesman Piya Uthayo said the "main force" of anti-government protesters in Bangkok was now less than about 15,000, down from at least 100,000 on Sunday, though the total fluctuates through the day and into the evening.

The protesters' ultimate goals appear increasingly unclear. They have urged civil servants nationwide to resign en masse and for the creation of a democratically elected "people's assembly" to run alongside parliament and lead electoral reforms. Neither looks achievable, at least in the near term.

Democrat leader Abhisit Vejjajiva, former prime minister of a military-backed government that Yingluck routed in a 2011 election, called on Yingluck to "move aside" and said party members would march with the protesters on Friday.

"This prime minister no longer has a mandate to govern the country," he told reporters.

A defiant Yingluck has said she will not dissolve parliament. Even if she did, protest leader Suthep Thaugsuban said the rallies would continue.

"No more negotiations," he told cheering crowds late on Wednesday after thousands massed outside government ministries, a state office complex and 25 provincial halls. His step-son, Akanat Promphan, spokesman for the Civil Movement for Democracy, as the protesters call themselves, also rejected talks.

"The prime minister's suggestion that all sides sit down and talk is insincere and we do not accept it," he said.

The protests began after Yingluck's ruling Puea Thai Party tried last month to pass an amnesty bill that would have absolved political offenses stretching back to a 2006 military coup, effectively clearing Thaksin of a 2008 graft conviction and allowing him to return from self-imposed exile.

The Senate rejected it, and Yingluck's party dropped it. But the bill galvanised the Democrat Party and its allies in protests reminiscent of the "yellow shirt" movement which helped topple Thaksin and his supporters in previous years.

Yingluck's party holds a commanding majority in parliament. She needed more than half of the 492 lower house votes to win the no-confidence vote. She got 297, with 134 against.

After the vote, protesters cut electricity to the police headquarters, forcing police to use a generator. One attacked a policeman with a slingshot, striking him with a stone, said Anucha Romyanan, deputy police spokesman.

They shouted abuse against Yingluck, a former business executive, who they accuse of being an illegitimate proxy for her brother, a tycoon-turned-prime minister revered by the poor as the first politician to have addressed their needs.

Yingluck's party and its coalition partners faced three days of debate during which the Democrats grilled her on a $100 million water management project and financially troubled government rice intervention scheme.

Those debates were as much about her as about Thaksin, a major influence on her signature policies. Despite fleeing into exile to dodge a jail sentence for abuse of power in 2008, Thaksin remains a political force, often communicating with the cabinet members via Skype from his villa in Dubai.

Critics accuse him of abusing his electoral mandate to dismantle constitutional checks and balances while cementing his authoritarian rule during two administrations from 2001 to 2006.

But in the vote-rich northern and northeastern heartlands, his populist policies - from virtually free healthcare, to easy consumer credit and low-interest loans - were unprecedented, winning him enough support to become Thailand's first elected leader to complete a full four-year term.

Much of that support remains intact, which means Yingluck would almost certainly win an election if one were called, though not with the same parliamentary majority.

"The Puea Thai Party is as united as ever and the Shinawatras will not be leaving politics anytime soon," Prompong Nopparit, an adviser to Yingluck's party, told Reuters.

The protests threaten to destabilise Thailand at a delicate time, just as its $366 billion economy, Southeast Asia's second biggest, is losing momentum. Factory output shrank for a seventh straight month in October and fell by more than most economists had expected, adding to other scattered signs of weakness that prompted the central bank to unexpectedly cut interest rates on Wednesday.

The protesters have occupied the Finance Ministry since Monday and have gathered at the gates of other ministries, in some cases causing staff to evacuate. About 700 briefly turned up at the heavily barricaded Defence Ministry opposite Bangkok's Grand Palace, one of Thailand's main tourist sites.

"We want them to join us," said protester Malee Kongsinkaeo.