Texas power plants back online, but 325,000 households still in the dark

By Adrees Latif GALVESTON, Texas (Reuters) - Texas Governor Greg Abbott said on Thursday that all power generating plants in the state were back online but hundreds of thousands of homes remain without energy because of downed lines and other issues after a ferocious winter storm. Some 325,000 households still do not have power, down from 2.7 million on Wednesday, and more than 13 million Texans are seeing interruptions in their water services. Energy operators and state leaders like Abbott are facing withering criticism for the prolonged outages due to freezing temperatures that began four days ago. 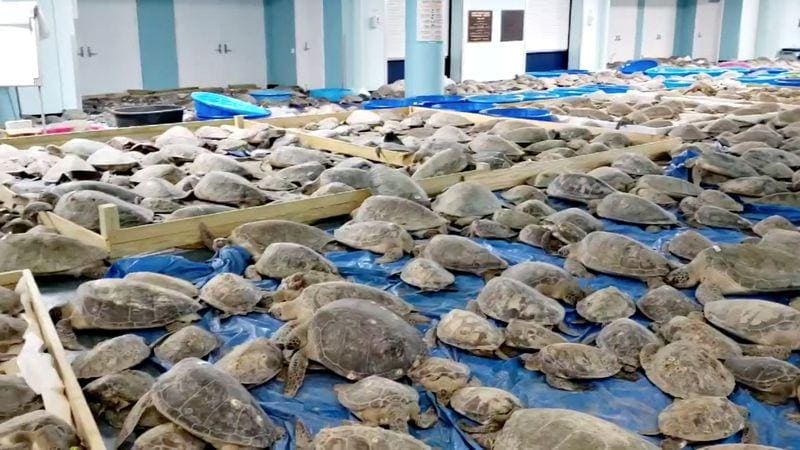 GALVESTON, Texas (Reuters) - Texas Governor Greg Abbott said on Thursday that all power generating plants in the state were back online but hundreds of thousands of homes remain without energy because of downed lines and other issues after a ferocious winter storm.

Some 325,000 households still do not have power, down from 2.7 million on Wednesday, and more than 13 million Texans are seeing interruptions in their water services.

Energy operators and state leaders like Abbott are facing withering criticism for the prolonged outages due to freezing temperatures that began four days ago.

Abbott said he has asked state legislators to push through laws mandating that all energy generation plants in Texas "winterize" their facilities like those in colder states do in the hopes that future cold snaps don't result in electrical grid failures.

"What happened this week to our fellow Texans is absolutely unacceptable and can never be replicated again," Abbott told an afternoon news conference.

The governor lashed out at the Electric Reliability Council of Texas (ERCOT), a cooperative responsible for 90% of the state's electricity, which he said had told officials before the storm that the grid was prepared for the cold weather.

Judge Lina Hidalgo, the top elected official in Harris County, which encompasses Houston, said the number of homes without power in her county had fallen to 33,000 from 1.4 million a few nights ago.

"It's definitely a big positive that the power is back on for most of the residents," Hidalgo said in an interview. "It's been a miserable few days, a really tragic few days."

Hidalgo warned that a "hard freeze" on Thursday night could cause setbacks and encouraged donations to food banks, with some residents struggling to secure food and water. She noted reports of senior centers and other vulnerable communities lacking basic supplies.

Angry residents have trained much of their ire on ERCOT, which critics say did not heed warnings after a cold weather meltdown in 2011 to ensure that Texas' energy infrastructure, which relies primarily on natural gas, was winterized.

Critics have also raised questions about Abbott's leadership. U.S. Senator Ted Cruz came under fire for flying to the Mexican resort city of Cancun with his family in the middle of the crisis. The Republican lawmaker cut his trip short after his travels were reported, saying he would return to Texas and "get to the bottom of what happened."

Gary Southern, a 68-year-old real estate broker from Mineral Wells, Texas, said his power was restored on Wednesday afternoon, enabling him to have his first solid night of sleep since he lost electricity in the early hours of Monday.

"It was one of the worst things we've ever had to go through," the lifelong Texan said, adding that he was frustrated at being told there would be rolling blackouts, only to go days without power at all. "I know a lot of people in our community still don't have it (power) and are frustrated."

The lack of power has cut off water supplies for millions, further strained hospitals' ability to treat patients amid a pandemic, and isolated vulnerable communities with frozen roads still impassable in parts of the state.

As of Thursday afternoon, 797 public water systems were reporting disruptions in service, affecting 13.2 million people, according to the Texas Commission on Environmental Quality. Most of those affected have been told they need to boil their water.

The Federal Emergency Management Agency (FEMA) said historically low temperatures were hindering efforts to inoculate people against COVID-19, with more than 2,000 vaccine sites in areas with power outages. In addition to aiding Texas, FEMA said on Thursday it would provide assistance to the neighboring state of Oklahoma due to the weather's impact on its power grid.

Nearly two dozen deaths have been attributed to the cold snap. Officials say they suspect many more people have died, but their bodies have not been discovered yet.

In Galveston on the Gulf Coast of Texas, a pop-up shelter with heat but no running water had allowed about three dozen people to huddle overnight before they were ushered back out into the cold on Thursday morning to let cleaning crews get it ready for Thursday night.

"When you go to the bathroom, grab a bucket of water to clear the toilet - we're going old school!" Cesar Garcia, director of Galveston's Parks and Recreation Department, called out as he oversaw scrubbing of the shelter in the McGuire-Dent Recreation Center.

Garcia said he was bracing for a potentially bigger crowd on Thursday night, perhaps closer to the 100 who sought shelter on Monday, sleeping on bleachers or a gymnasium floor with blankets and whatever they brought with them from home.

"Tonight being the coldest night, we don't know what to expect," Garcia said.