By Jon Herskovitz AUSTIN, Texas (Reuters) - Victims and survivors of mass shootings in Texas took part in a final round of talks on Thursday with Republican Governor Greg Abbott, who is seeking ways to stop gun massacres after a shooter killed 10 people in a Houston-area high school. 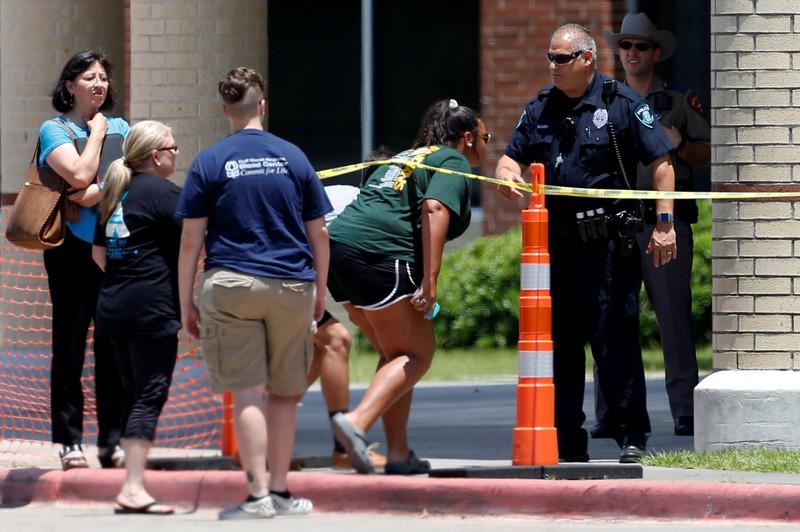 AUSTIN, Texas (Reuters) - Victims and survivors of mass shootings in Texas took part in a final round of talks on Thursday with Republican Governor Greg Abbott, who is seeking ways to stop gun massacres after a shooter killed 10 people in a Houston-area high school.

The talks are the third and last in a series this week. They came days after a teenage student gunned down eight fellow classmates and two teachers at Santa Fe High School, the latest in a series of U.S. mass school shootings that stoked a simmering national debate about preventing the carnage on campuses.

"After our school shooting, it was hard to talk about it," said Morgan Molsbee, a student at Alpine High School in West Texas, where in late 2016 a 14-year-old girl shot and wounded a fellow student and then died of a self-inflicted gunshot wound.

"At first going to school after (that) was scary. You have to move on from it and the teachers will help you," said Molsbee ahead of the meeting that she was attending with her mother, Jackie Molsbee who is a teacher in Alpine.

Jackie Molsbee said she planned to ask for better mental health screening on campus and more money for school security.

"If we are told we have to upgrade security, all schools in Texas need help, not just our school," she said.

With the Texas legislature out of session until January, it is nearly impossible for the state to implement or fund any major policy changes that come out of the talks.

Texas Democrats have described the sessions as theatrics that will skirt major issues such as substantive gun control.

The round on Thursday included about 40 people affected by the shootings in Alpine, Santa Fe and Sutherland Springs, Texas, where a gunman fatally shot 26 churchgoers in November.

The panel on Wednesday discussed ways to address mental health issues, safe storage measures for firearms at homes and so-called red flag warning laws intended to keep guns out of the hands of people deemed by a judge to be a danger to themselves or others. [L2N1SU1EQ]

Abbott, a staunch supporter of gun rights, said any changes to state laws would need to protect Second Amendment rights to bear arms as enshrined in the U.S. Constitution.

In contrast to Florida, where the killing of 17 teens and educators at a high school in February sparked a youth-led movement calling for new restrictions on gun ownership, the Texas tragedy saw many elected officials and survivors alike voicing support for gun rights.

Dimitrios Pagourtzis, 17, has been charged with murder in the killing during a rampage at Santa Fe High School on Friday.