By Jon Herskovitz AUSTIN, Texas (Reuters) - Days after 10 people were shot to death at Texas high school, Governor Greg Abbott met with politicians and school administrators on Tuesday to consider proposals to stem school violence in a state where gun-control measures usually sink in the Republican-controlled legislature. 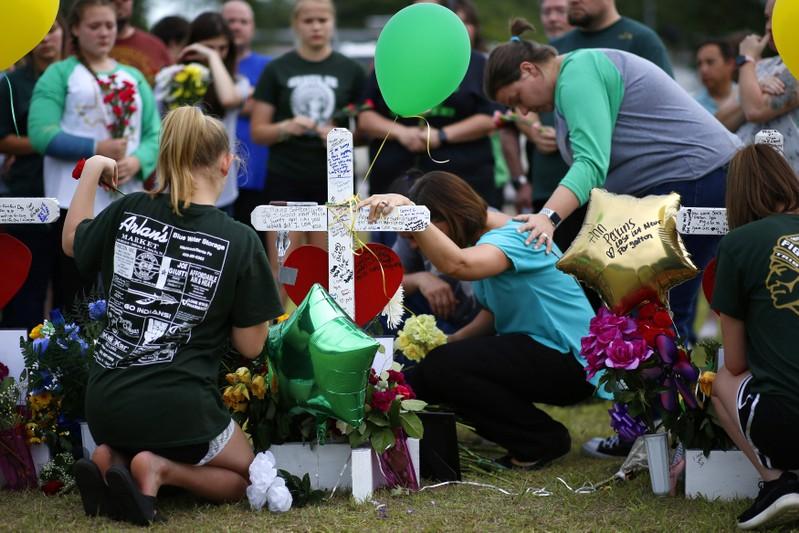 AUSTIN, Texas (Reuters) - Days after 10 people were shot to death at Texas high school, Governor Greg Abbott met with politicians and school administrators on Tuesday to consider proposals to stem school violence in a state where gun-control measures usually sink in the Republican-controlled legislature.

About 20 people, including those who support arming teachers, attended the first of three days of meetings in the state capital, Austin, following the fourth-deadliest U.S. school shooting this year at Santa Fe High School in Santa Fe, Texas, on Friday.

"The problem is that innocent people are being shot and that must be stopped," Abbott, a staunch gun rights supporter, told reporters before the meeting that lasted more than two hours and was held behind closed doors.

Among the measures coming out of the meeting that Abbott said he would like to see implemented quickly were expanding school safety training programs, bolstering threat assessment systems and expanding a pilot program designed to screen for students who might be a threat to themselves or others.

"We did more today than talk. We came up with some very solid solutions," Abbott told reporters. Another measure under consideration was setting up a system to monitor social media for warning signs of an attack.

The Republican-controlled legislature is out of session until January 2019, making it nearly impossible for the state to implement and fund any major changes that come out of this week's talks.

The Texas Democratic Party in a statement called the roundtable meetings "theatrics" and chastised Abbott for holding the discussions behind closed doors.

Abbott, a Republican, has vowed that any changes to state laws would "protect Second Amendment rights."

The Second Amendment of the U.S. Constitution enshrines the right to bear arms. Gun rights proponents say it prohibits regulations on gun ownership and that enforcement of existing laws should be sufficient to stop violent incidents like the one in Santa Fe.

Gun control groups point to the regular toll of shootings across the United States as evidence that more needs to be done to rein in the proliferation of weapons.

The U.S. Supreme Court has avoided major gun cases for a number of years, leaving in place restrictions on guns enacted by some states.

In contrast to Florida, where the killing of 17 teens and educators in February sparked a youth-led movement calling for new restrictions on gun ownership, the Texas tragedy saw elected officials and survivors alike voicing support for gun rights.

Some gun rights proponents in Texas have embraced the idea of arming teachers, a strategy advocated by the National Rifle Association and U.S. President Donald Trump. That solution is largely rejected by survivors and parents in Parkland, Florida, after the carnage there.

Police arrested Dimitrios Pagourtzis, 17, at the Santa Fe school following the rampage they said he committed with a shotgun and a .38-caliber pistol. He is charged with capital murder of 10 people - eight students and two teachers.

Police said Pagourtzis confessed to Friday's killings after being taken into custody, but they have offered no motive yet for the massacre.

He is being held without bond, on suicide watch, at the Galveston County Jail in Galveston, Sheriff Henry Trochesset said.

Four minutes after Pagourtzis started shooting, police entered the school's hallway and exchanged gunfire with him while he remained in a classroom, allowing the rest of the school to be evacuated, Trochesset said.