Tens of thousands of Algerian students extend protests against Bouteflika

By Hamid Ould Ahmed and Lamine Chikhi ALGIERS (Reuters) - Tens of thousands of Algerian students protested in the capital and other cities for a fifth day running on Tuesday against President Abdelaziz Bouteflika's plan to extend his 20-year rule by seeking a fifth term, witnesses said. It was the fifth day of demonstrations but the first covered by state media after its journalists called on their employers to allow them to cover the protests 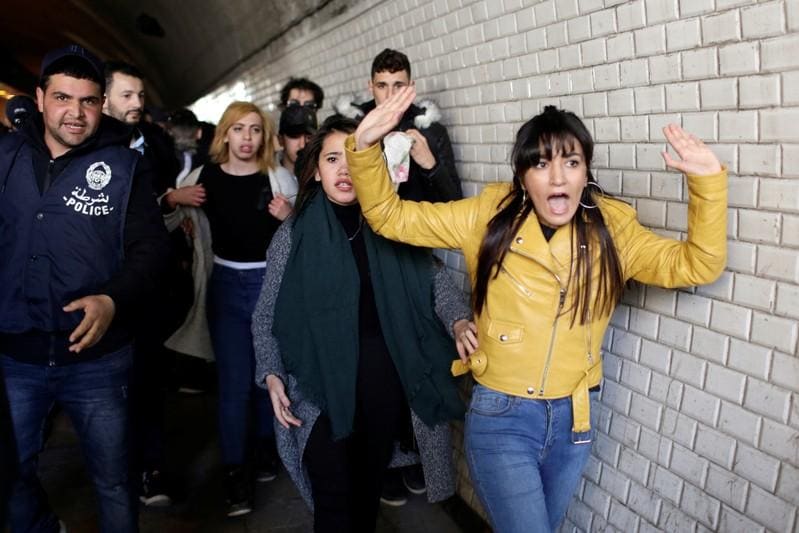 ALGIERS (Reuters) - Tens of thousands of Algerian students protested in the capital and other cities for a fifth day running on Tuesday against President Abdelaziz Bouteflika's plan to extend his 20-year rule by seeking a fifth term, witnesses said.

It was the fifth day of demonstrations but the first covered by state media after its journalists called on their employers to allow them to cover the protests.

Students were demanding that Bouteflika, 81, drop his intention to seek re-election in the April 18 presidential vote.

Bouteflika suffered a stroke in 2013, has been seen in public only a few times since and has given no known speeches in years.

Despite the rare outpouring of public dissent, Bouteflika's campaign manager said the president would file formal papers for re-election on March 3, 15 days before the vote.

"Nobody can decide to erase what we have in the constitution," Abdelmalek Sellal told a crowd of Bouteflika supporters in televised remarks. "It is his right to be a candidate."

The student protesters, who chanted "peaceful, peaceful" and "no to a fifth term", were also asking for government steps to provide jobs. More than a quarter of Algerians under 30 are unemployed.

"Many young people got their university degree but they are still unemployed," said a student who gave his name as Djahid.

Hundreds marched in central Algiers while other students held rallies inside faculties as police sought to prevent them leaving the university to link up with counterparts in the streets.

Rallies drawing up to thousands of people were also held in towns including Bejaia, Tizi Ouzou, Blida and Bouira, residents there told Reuters by telephone.

The state news agency APS said the protesters were demanding "change and reform". State television showed for the first time in its main evening news footage of demonstrations.

Bouteflika has not directly addressed the protests. The authorities said he would be travel to Geneva for unspecified medical checks, although there was no official confirmation he had left.

Many Algerians for years avoided politics in public, fearing trouble from the omnipresent security services, or having simply stopped caring as the country has been run by the same group of veterans since the 1954-1962 independence war with France.

Bouteflika himself has ruled since 1999 and stamped out a decade-long Islamist insurgency early in his rule. Many Algerians have long tolerated a political system with little space for dissent as a price to pay for peace and stability.

But the new protest waves appears to have broken the long taboo on public discussion of politics.

According to Bouteflika's opponents, there is no evidence he is in fit enough health to lead the country and that it is being ruled in his name by advisers. Authorities say he retains a firm grip on public affairs despite the rarity of his appearances.

A weak and divided opposition faces high hurdles in mounting an electoral challenge. Since the long-ruling FLN party again picked Bouteflika as its presidential candidate, several parties, trade unions and business groups have endorsed him.