By Liz Hampton and Erwin Seba SANTA FE, Texas (Reuters) - A male student who entered a Texas high school on Friday and shot dead ten people, including fellow pupils, had planned to end the attack with his suicide but instead surrendered to police, Texas Governor Greg Abbott said. Students said a gunman opened fire in a classroom at Santa Fe High School shortly before 8 a.m. CT (1300 GMT) on Friday, and that they fled in panic after seeing classmates wounded and a fire alarm triggered a full evacuation. 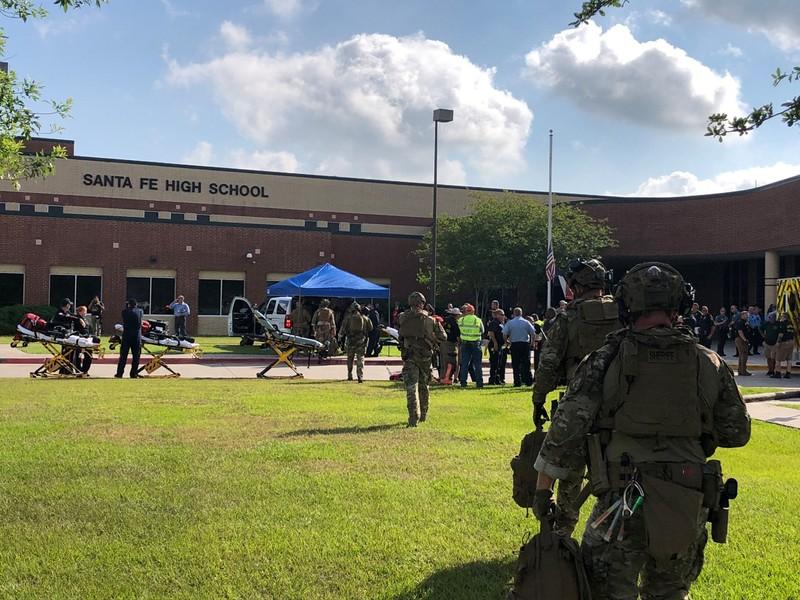 SANTA FE, Texas (Reuters) - A male student who entered a Texas high school on Friday and shot dead ten people, including fellow pupils, had planned to end the attack with his suicide but instead surrendered to police, Texas Governor Greg Abbott said.

Students said a gunman opened fire in a classroom at Santa Fe High School shortly before 8 a.m. CT (1300 GMT) on Friday, and that they fled in panic after seeing classmates wounded and a fire alarm triggered a full evacuation.

Ten people were also wounded in Friday's attack, Abbott told a news conference, and the gunman had used a shotgun and a .38 revolver taken from his father.

Two other people are in custody, Abbott said. He did not identify the suspected gunman or the two others.

One of the people detained is Dimitrios Pagourtzis, according to a law enforcement source who spoke on condition of anonymity because he was not authorized to publicly discuss the investigation told Reuters.

Explosive devices had also been found at the school, located about 30 miles (48 km) southeast of Houston, and off campus, Harris County Sheriff Ed Gonzalez tweeted. "Law enforcement is in the process of rendering them safe."

Police were searching two homes and a vehicle linked to the suspect, where they have found multiple homemade explosive devices, Abbott said.

The school has some 1,462 students, according to federal education data.