By Brendan McDermid and Stephen Maturen (Reuters) - A 17-year-old was arrested and charged with homicide on Wednesday in connection with gunfire that killed two people and wounded a third during protests over the police shooting of a Black man in Kenosha, Wisconsin, officials said. 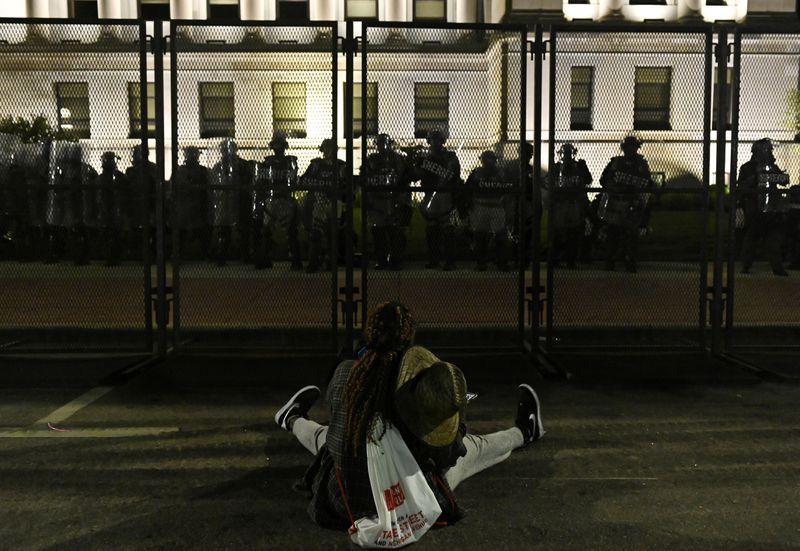 (Reuters) - A 17-year-old was arrested and charged with homicide on Wednesday in connection with gunfire that killed two people and wounded a third during protests over the police shooting of a Black man in Kenosha, Wisconsin, officials said.

The lakeside city of Kenosha has been rocked by civil unrest since Sunday, when police shot Jacob Blake, 29, in the back at close range. The incident, captured on video, has reignited protests over racism and police use of force in the United States.

The third night of protests in the city of 100,000 between Milwaukee and Chicago erupted in gunfire shortly before midnight, prompting some elected officials to call for a reinforcement of National Guard troops or the deployment of federal law enforcement officers.

"TODAY, I will be sending federal law enforcement and the National Guard to Kenosha, WI to restore LAW and ORDER!" Trump wrote on Twitter, without elaborating.

The violence coincided with the second night of the Republican National Convention, in which Trump has made "law and order" crackdowns on protest violence a campaign theme.

The suspect was identified as Kyle Rittenhouse, 17, who was arrested on a warrant in Illinois and charged with first-degree intentional homicide in Kenosha, a Lake County court official said.

Police in Antioch, Illinois, confirmed a 17-year-old had been arrested in connection with the Kenosha gunfire and was being held by the Lake County judicial system.

The first two nights of protests in Kenosha were overtaken by outbreaks of vandalism and arson that destroyed several businesses. On the third night it turned deadly.

It was unclear what set off the gunfire, but the streets of Kenosha were teeming with a combustible mix of protesters and armed militia members, who had been guarding local businesses.

"What it seems to be is a member of a militia group who decided to be a vigilante and take the law into his own hands and mow down innocent protesters," Wisconsin Lieutenant Governor Mandela Barnes told MSNBC television on Wednesday before the arrest was reported.

Video on social media showed the shooter was a white man with a rifle. Rittenhouse's now-deleted Facebook page shows him posing with another young man, both of them holding rifles. The photo is encircled by a Blue Lives Matter badge in support of police.

Social media videos capture much of the overnight violence, but not the initial confrontation involving the gunman. The videos show a crowd chasing the gunman, believing he had shot another man.

As the crowd disperses around him, the man walks freely down the street, his hands in the air and his rifle hanging in front of him.

He walks past several police vehicles, which drive by without stopping him.

Kenosha police said in a statement that two people had died and a third gunshot victim was taken to a hospital with serious injuries, though he was expected to live. They pleaded for witnesses to come forward, asking for additional video or photos beyond those posted on social media.

Anti-racism protesters also clashed with police in Portland, Oregon, and Louisville, Kentucky, on Tuesday night, part of a wave of national protests that have continued since the May 25 death of George Floyd, a Black man who died after a white Minneapolis police officer knelt on his neck.

The Kenosha Guard, which identifies itself on Facebook as a local militia, had posted a message warning police they would be out on the streets.

"We are unaware if the armed citizen was answering the Kenosha Guard Militia's call to arms," the group later posted on Facebook.

In Sunday's shooting, Blake was hit by four of seven shots fired and left paralyzed, his family and lawyers said.

Blake underwent another round of surgery on Tuesday to stabilize his spine with rods and screws, Patrick Salvi Sr., a lawyer for Blake's family, told CNN on Wednesday.

Salvi also said Kenosha officials have been "tight-lipped" about their investigation into the shooting, depriving the family of the police officers' version of what happened.

The Wisconsin Department of Justice is leading the investigation and has yet to provide details. Kenosha police have referred all queries to that agency.