By Ben Blanchard BEIJING (Reuters) - A slowing economy is unlikely to crimp China's 2019 defence budget rise, as Beijing earmarks more spending for modernisation and big-ticket items like stealth jets, and focuses on Taiwan after a stern new year's speech from President Xi Jinping. The defence spending figure is closely watched worldwide for clues to China's strategic intentions as it develops new military capabilities, including aircraft carriers and anti-satellite missiles. In 2018, China unveiled its largest defence spending increase in three years, setting an 8.1 percent growth target for the year, fuelling an ambitious military upgrade programme and making its neighbours nervous. 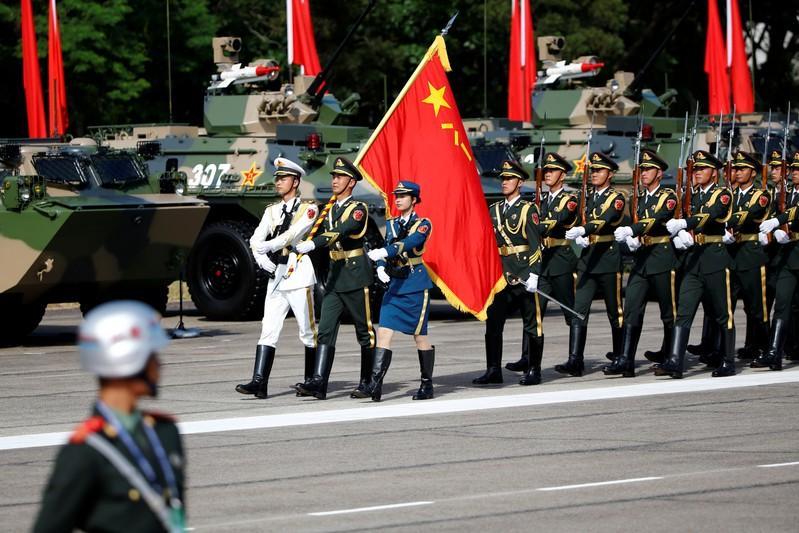 BEIJING (Reuters) - A slowing economy is unlikely to crimp China's 2019 defence budget rise, as Beijing earmarks more spending for modernisation and big-ticket items like stealth jets, and focuses on Taiwan after a stern new year's speech from President Xi Jinping.

The defence spending figure is closely watched worldwide for clues to China's strategic intentions as it develops new military capabilities, including aircraft carriers and anti-satellite missiles.

In 2018, China unveiled its largest defence spending increase in three years, setting an 8.1 percent growth target for the year, fuelling an ambitious military upgrade programme and making its neighbours nervous.

The 2019 number should be revealed at the March 5 opening of the annual session of China's largely rubber-stamp parliament, although in 2017 it was initially not announced, prompting renewed concerns about transparency.

However, the defence budget increase could well surpass that.

Influential state-run tabloid the Global Times, which takes a strongly nationalistic line, this month cited an unidentified military expert as saying "a stable 8-9 percent increase from 2018 would be a reasonable prediction".

China still has a long way to go to catch Western forces because the number of advanced weapons now in its arsenal, such as the J-20 stealth fighter, remain limited, the paper said.

Xie Yue, a professor of political science at Tongji University in Shanghai and a security expert, said with a weakening economy there would naturally be an expectation for a slower increase in military spending.

"It should go down, as the defence budget is connected to economic growth, but certainly factors will probably mean it will still go up, like the South China Sea and Taiwan issues," Xie said.

Xi's January speech threatening to attack Taiwan should it not accept Chinese rule has shot the issue back up the agenda for China's military thinkers, especially as the island gears up for presidential elections next year.

"The Taiwan question can't keep being put off, passed down through the generations," retired Chinese Major General Luo Yuan, one of the country's most prominent and widely read military commentators, wrote on his blog last month.

"Our generation must complete our historic mission."

'ITCHING FOR A FIGHT'

One source with ties to China's military said the armed forces were itching for a fight over self-ruled Taiwan, claimed by China as its sacred territory, especially after Xi's speech.

"Every day, they're like 'fight, fight, fight'," said the source, who regularly meets senior officers.

Taiwan President Tsai Ing-wen has repeatedly warned of the threat from China, and vowed to defend the island and its democratic way of life. The United States has said it is closely watching Chinese intentions towards Taiwan.

"Even with just a broom, I would fight against China," Taiwan Premier Su Tseng-chang told parliament last week. "You would pay a price if you want to annex Taiwan."

The United States again sent two Navy ships through the Taiwan Strait on Monday as the U.S. military increased the frequency of movement through the strategic waterway despite opposition from China.

China's Defence Ministry did not respond to a request for comment on this year's military budget. China routinely says spending is for defensive purposes only, comparatively small and that critics just want to keep the country down.

"What people are scared of is China getting strong," said Xu Guangyu, a senior consultant at the China Arm Control and Disarmament Association and another former senior Chinese officer, dismissing concerns about defence spending.

U.S. President Donald Trump has backed plans to request $750 billion from Congress for defence spending in 2019. That compares with the 1.11 trillion yuan ($165.40 billion) China set for its military budget in 2018.

China provides no breakdown of its defence budget, leading neighbours and other military powers to complain that Beijing's lack of transparency has added to regional tension. China says it is fully transparent and no threat.