Suruc, Turkey: Islamic State jihadists have captured the headquarters of Kurdish fighters defending the Syrian border town of Kobane, with a UN envoy warning thousands would likely be massacred if it falls to them.

still in the area, prompting an appeal yesterday for urgent military assistance.

US-led warplanes have intensified air strikes against IS, which has been attacking Kobane for three weeks, but the Pentagon has said that there are limits to what can be done without troops on the ground. 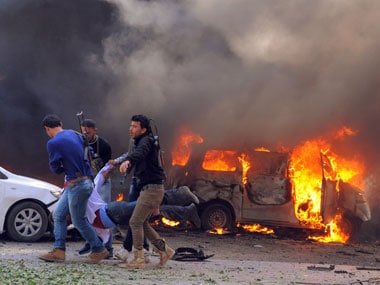 Washington also warned that the military campaign could lead to reprisal attacks "against US, Western and coalition
partner interests throughout the world".

The jihadists' advance has brought the front line to just 1.3 kilometres from the Turkish border but Ankara has so far
refrained from any action against the jihadists.

Four straight nights of protests among Turkey's large Kurdish minority have left 31 people dead as anger flared over
the government's lack of action to save Kobane.

IS now controls 40 percent of the town, according to the Britain-based Syrian Observatory for Human Rights.

As fighting raged, an IS suicide bomber struck to the west of the Kurdish headquarters in Kobane killing two people, and 10 Kurds were killed in an IS ambush on the south side of town, the Observatory said.

US planes conducted nine new airstrikes in Syria on Thursday and Friday, the US military said.

An AFP correspondent on the Turkish side of the border saw a cloud of white smoke rising above Kobane after coalition strikes yesterday.

UN envoy for Syria Staffan de Mistura warned that 12,000 or so civilians still in or near Kobane, including 700 mainly elderly people in the town centre, "will most likely be massacred" by IS if the town falls.

Kobane was "literally surrounded" except for one narrow entry and exit point to the border, de Mistura said.

The envoy called on Turkey, "if they can, to support the deterrent actions of the coalition through whatever means from their own territory."

"We would like to appeal to the Turkish authorities in order to allow the flow of volunteers at least, and their
equipment to be able to enter the city to contribute to a self-defence operation," he said in Geneva.

The United States reported "progress" in pressing Turkey to participate in the fight against the Islamic State group,
noting a pledge from Ankara to train and equip moderate Syrian rebels.