Swiss on collision course with EU as treaty talks stall

By Michael Shields and Philip Blenkinsop ZURICH/BRUSSELS (Reuters) - The European Commission set a mid-October deadline for progress in talks on a treaty governing its economic relationship with Switzerland on Friday, taking a tough line after Bern made no new concessions that could break a logjam weighing on bilateral ties. Negotiations have dragged on for five years on a treaty that Brussels has demanded for a decade. 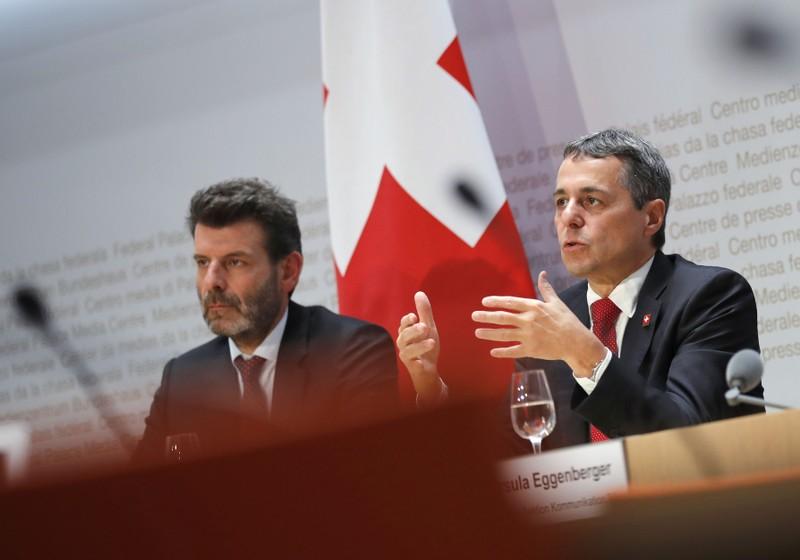 By Michael Shields and Philip Blenkinsop

ZURICH/BRUSSELS (Reuters) - The European Commission set a mid-October deadline for progress in talks on a treaty governing its economic relationship with Switzerland on Friday, taking a tough line after Bern made no new concessions that could break a logjam weighing on bilateral ties.

Negotiations have dragged on for five years on a treaty that Brussels has demanded for a decade.

The talks are now complicated by Britain's separate negotiations on divorce terms from the European Union, with the Commission loath to be too soft on the Swiss for fear of providing ammunition to Brexiteers.

Unable to forge domestic consensus on amending rules that protect high Swiss wages from cross-border contractors, the Swiss cabinet proposed continuing negotiations on the basis of its current mandate.

The Swiss labour rules have been the major bone of contention with Brussels, which has been pushing to wrap up an accord by the end of the year.

Swiss Foreign Minister Ignazio Cassis had told parliament on Thursday that talks had not made enough progress so far to clinch a deal, adding it was "written in the stars" whether a breakthrough was still possible this year.

Such star-gazing was not enough for the Commission.

"Time is pressing and the window of opportunity is closing (in) mid-October," it said, calling it vital to make progress on disputes over state aid provisions and the Swiss labour rules.

"Our guiding principle in these negotiations remains: those who want to do business in the EU's internal market need to comply with the rules," a spokeswoman said in an emailed statement.

Brussels has been ratcheting up pressure on non-member Switzerland to agree a pact that would sit atop an existing patchwork of 120 sectoral accords and have the Swiss routinely adopt changes to single market rules.

In a sign of good faith, the Swiss government said it would ask parliament to approve another 1.3 billion Swiss francs ($1.33 billion) in contributions over a decade to help EU member states handle training and migration issues.

Should treaty talks fail -- and time is short ahead of elections in Switzerland and for the European Parliament both due next year -- the 120 sectoral accords would stay in effect, but bilateral relations would enter a deep freeze.

Failure to strike a deal would mean no increase in Swiss access to the single market, dashing hopes for a new electricity union. It could also endanger unfettered EU market access for Swiss makers of products such as medical devices, if agreements on mutual recognition of standards lapse.

The Commission has threatened not to extend beyond this year recognition of Swiss stock exchange rules that allow cross-border trading, which could touch off tit-for-tat escalation.

The offer helped defuse arguments from the right-wing, anti-EU Swiss People's Party, the largest in parliament, that foreign judges should not be allowed to dictate to the sovereign Swiss.

But negotiations ran aground again in August when Switzerland's normally pro-Europe centre-left baulked at adapting the labour rules.

With both the left and right opposed to a deal, the treaty would hardly have a chance of surviving a referendum that would be likely under the Swiss system of direct democracy.