Swedish parties begin search for way out of political deadlock

By Daniel Dickson and Johan Sennero STOCKHOLM (Reuters) - Sweden's anti-immigration party - shunned by the political mainstream - insisted on Thursday it would block the formation of a new government unless it gets a say in policy - leaving parliament deadlocked three weeks after a general election. 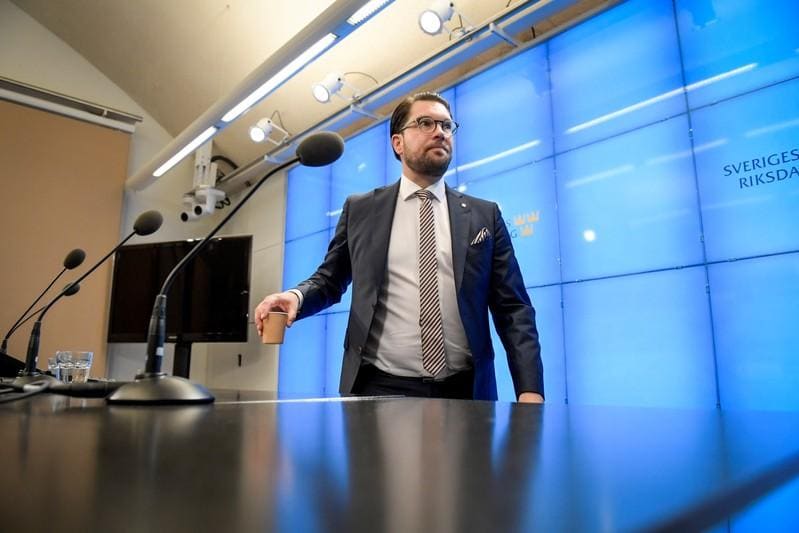 By Daniel Dickson and Johan Sennero

STOCKHOLM (Reuters) - Sweden's anti-immigration party - shunned by the political mainstream - insisted on Thursday it would block the formation of a new government unless it gets a say in policy - leaving parliament deadlocked three weeks after a general election.

The Sweden Democrats have grown in popularity since entering parliament in 2010 and hold the balance of power after winning 62 seats in the 349-member house at a Sept. 9 election.

They voted with the centre-right, opposition Alliance bloc to sink the government of Social Democrat prime minister Stefan Lofven on Tuesday. But at consultations on forming a new administration on Thursday, said they would not back an Alliance government.

"We will not, either actively or passively, support a government that does not give us influence," Sweden Democrats leader Jimmie Akesson told reporters after meeting the speaker of parliament, who met all party leaders on Thursday.

The speaker, Andreas Norlen, has four attempts at picking a prime minister who can get support from parliament - a process that could take weeks. If he fails there will be a new election within three months.

After his meetings, Norlen said he had not asked any potential candidate to try and put together a government yet.

"My judgement is that we will probably need one or more rounds ... of discussions with the partly leaders," he told reporters. "They are not all in agreement on how things should proceed."

Lofven and Alliance leader Ulf Kristersson are both claiming the right to build a new minority administration.

Kristersson said he wanted to form a government consisting of his Moderate party and its Centre, Liberal and Christian Democrat allies. With 143 members of parliament, that grouping is one seat smaller than Lofven's centre-left bloc.

The Centre and Liberal parties ruled out such an arrangement unless it was backed by Lofven's Social Democrats.

"I do not plan to be a hostage to the Sweden Democrats in a government," Centre Party leader Annie Loof told reporters.

Lofven, whose Social Democrats are the biggest party in parliament, is hoping that the Centre and Liberal parties will support him if their only other option is a deal with the Sweden Democrats.

But splitting the Alliance would probably consign the centre-right to years in opposition and few parties have fared well after cooperating with the Social Democrats.

Support for the Green Party dipped to 4.4 percent at the most recent election, down from 6.9 percent after four years in a coalition with Lofven, their worst result since 1991 when they dropped out of parliament.

The Centre party slumped in polls after backing a Social Democrat government in the early 1990s.

Sweden Democrat leader Jimmie Akesson said he would prefer a government of the Moderates, the biggest Alliance party, and the Christian Democrats, but that they would have to his party a say in policy to get his support.