By Nadine Awadalla KHARTOUM (Reuters) - Sudan's main protest group called on Tuesday for a general strike, saying two late-night negotiation sessions with the military had failed to reach a deal on how to lead the country after the overthrow of former president Omar al-Bashir. 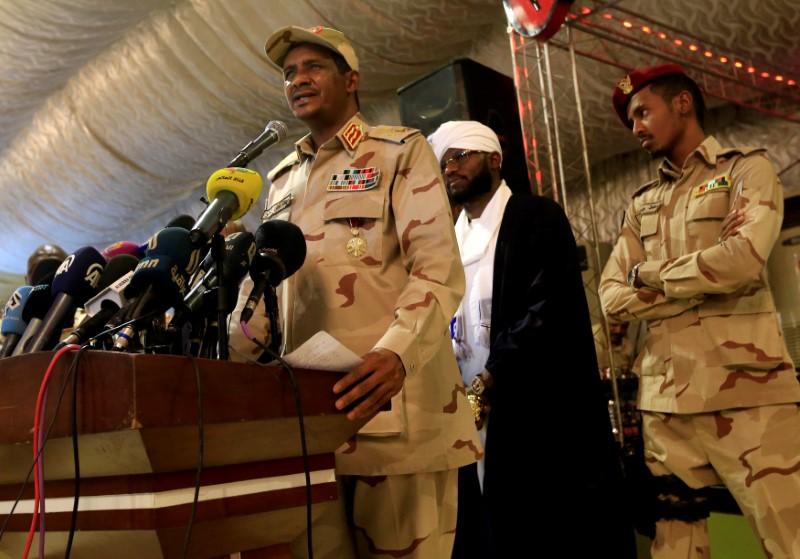 KHARTOUM (Reuters) - Sudan's main protest group called on Tuesday for a general strike, saying two late-night negotiation sessions with the military had failed to reach a deal on how to lead the country after the overthrow of former president Omar al-Bashir.

An alliance of protest and opposition organisations is demanding civilians head a new Sovereign Council which is meant to oversee a three-year transition towards democracy.

But the Sudanese Professionals Association (SPA) protest group said the army was still insisting on directing the transition and keeping a military majority on the council.

"Civilian power means that the structure is fully civilian with a civilian majority in all its parts," the SPA said in a statement. It said members should mobilise for a strike, without giving a date.

The impasse has hit hopes of a quick recovery from the political turmoil that climaxed in the end of Bashir's three-decade rule on April 11.

Several powers including wealthy Gulf Arab states are trying to influence the path of the country of 40 million, which straddles a volatile region between the Middle East and sub-Saharan Africa.

The former Islamist general, under whose rule Sudan was placed on a U.S. list of sponsors of terrorism, was ousted by the army after months of protests against soaring prices, cash shortages and other economic hardships.

The army set up a Transitional Military Council (TMC) to rule the country and promised to hand over after elections.

But, wary of the example of neighbouring Egypt where the head of the army eventually became president after the overthrow of Hosni Mubarak, Sudanese protesters have sought guarantees of civilian control.

Protesters have also been pushing for justice over the deaths of dozens of demonstrators since December and for a crackdown on corruption.

Bashir and some of his aides have been arrested, though on Tuesday guards blocked the arrest of Salah Abdallah Mohamed Saleh, known as Salah Gosh, Bashir's former intelligence chief.

Mohamed Ibrahim El Tayeb, a 60-year-old pharmacist in Khartoum, said people were also determined to learn from Sudan's own history, when previous uprisings had been "stolen" by the military.

A delay to negotiations would allow opponents of the uprising allied to the former regime "to organise and start fighting back", and strikes and civil disobedience would be used to pressure the military council to compromise, he said.

"This card of civil disobedience is one of our cards to ensure our revolution reaches a successful end."

The SPA had previously threatened a campaign of civil disobedience including mass strikes and boycotts as the talks stalled.

There have been sporadic work stoppages and some bankers and telecoms employees were on the streets on Tuesday in Khartoum calling for civilian rule.

Many medical staff have been on strike Dec. 19 when mass protests began against Bashir, who is sought by international prosecutors for alleged war crimes in the western Darfur region.

The army acknowledged early on Tuesday that the make-up of the sovereign council remained the main point of contention, but did not go into details on its position.

"Aware of our historical responsibility, we will work toward reaching an urgent agreement ... that meets the aspirations of the Sudanese people and the goals of the glorious December revolution," said a statement signed by the TMC.

It gave no date for when talks would resume.