VILA DE REI/MACAO, Portugal (Reuters) - More than 1,000 firefighters battled wildfires in central Portugal on Monday, forcing the evacuation of several villages as the authorities hoped to limit the number of residents at risk. 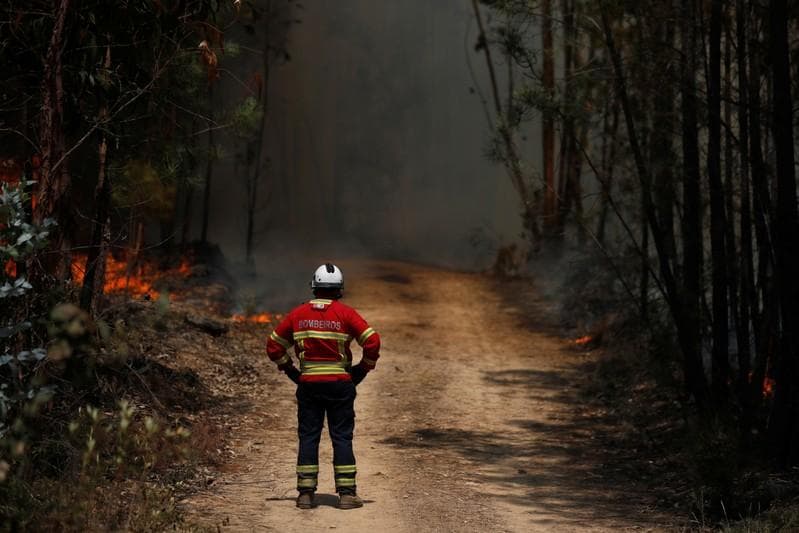 VILA DE REI/MACAO, Portugal (Reuters) - More than 1,000 firefighters battled wildfires in central Portugal on Monday, forcing the evacuation of several villages as the authorities hoped to limit the number of residents at risk.

So far 33 people have been injured, including one who is in a serious condition. Portugal's Civil Protection said some houses had been destroyed in the fires.

The fires are small in comparison to a massive fire which hit the same region in June 2017 that killed 64 people and burnt about 55,000 hectares in a few days.

But with temperatures set to reach 40 degrees Celsius (104 degrees Fahrenheit) in some areas on Monday, a number of municipalities in Santarem and Castelo Branco districts, northeast of the capital Lisbon, are on high alert.

Civil Protection said earlier on Monday the fire, which broke out on Saturday afternoon, was 90% under control but warned that the remaining blazes required "a lot of attention" as the winds whipped up later in the day, fanning the flames in tinder dry conditions.

Covered in eucalyptus and pine trees, central Portugal is frequently hit by summer blazes, with hilly terrain making it especially difficult for firefighters to reach.

Villagers, as well as local authorities in Macao and Vila de Rei, areas in the heart of the fire zone, said there were not enough firefighters and resources to combat the flames.

Sheep farmer Joaquim Ribeiro told Reuters there were no firefighters when the blaze arrived at his village in Macao, forcing him to transfer his animals somewhere else. "It was a pandemonium," he told Reuters.

Around 1,053 firefighters are on the ground, backed up by 328 firefighting vehicles and 13 airplanes, Portugal's Civil Protection department said.

"We have the capacity to respond (to the wildfire), both terrestrial and aerial, because the whole focus is on this operation," Civil Protection commander Pedro Nunes told reporters.

Spain announced late on Monday that it was sending two aircraft to help tackle the fires.

Data from the European Union fire mapping service showed about 8,500 hectares burnt over the weekend.