By John Irish and Christian Hartmann STRASBOURG, France (Reuters) - A gunman suspected of killing three people at a Christmas market in Strasbourg was still on the run on Thursday, 48 hours after the attack, eluding security forces who have launched a manhunt across eastern France and neighbouring Germany. The death toll from Tuesday night's attack rose to three, as police combed the city in the east of France for a second day and manned checkpoints on the German border. Police issued a wanted poster in multiple languages for Cherif Chekatt, the main suspect in the attack, who was on a watchlist as a potential security threat. 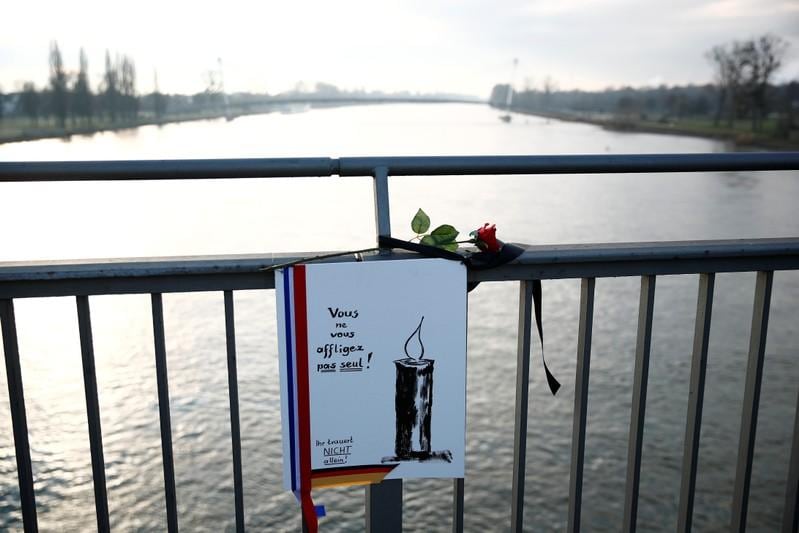 By John Irish and Christian Hartmann

STRASBOURG, France (Reuters) - A gunman suspected of killing three people at a Christmas market in Strasbourg was still on the run on Thursday, 48 hours after the attack, eluding security forces who have launched a manhunt across eastern France and neighbouring Germany.

The death toll from Tuesday night's attack rose to three, as police combed the city in the east of France for a second day and manned checkpoints on the German border.

Police issued a wanted poster in multiple languages for Cherif Chekatt, the main suspect in the attack, who was on a watchlist as a potential security threat. Authorities say the 29-year-old was known to have developed radical religious views while in jail.

Armed and masked police swooped on Strasbourg neighbourhoods with elite RAID officers fanning out across three locations in late afternoon, including the area where the suspected shooter was last seen. Some had their guns trained on the houses in front of them.

But after about two hours the operation ended with no sign of security forces any closer to apprehending the shooter.

The Paris prosecutor's office said that an individual close to Chekatt was arrested earlier in the day as part of the investigation into the attack, which also saw 13 other people wounded. His parents and two brothers are already in custody.

Two of his sisters in Paris were also questioned on Thursday and one of their homes was searched, a judicial source said.

Strasbourg's mayor has said the attack was "indisputably an act of terrorism" and, with the gunman on the run, France has raised its security threat to the highest level.

More than 700 police are taking part in the manhunt. French and German police manned controls on either side of the Europe Bridge, which spans the frontier running along the Rhine river, causing hours of logjams.

Asked if French police had been instructed to catch Chekatt dead or alive, government spokesman Benjamin Griveaux told CNews: "It doesn't matter. The best thing would be to find him as quickly as possible."

Police are also searching for a car in which he may have escaped, a source close to the investigation said.

It took police four months to track down Salah Abdesalam, the prime surviving suspect from the November 2015 militant assault on Paris, in an apartment in Brussels. One hundred and thirty people were killed in that attack as well as seven gunmen and bombers.

The Christmas market, a hugely popular attraction in historic Strasbourg, remained closed on Thursday, although people were returning to the area with many marking their respects for the victims by leaving candles in the main Kleber square.

Witnesses told investigators that the suspect Chekatt cried out "Allahu Akbar" (God is Greater) as he opened fire on the market, a target Paris Prosecutor Remy Heitz suggested may have been chosen for its religious symbolism.

French soldiers, who are part of anti-terrorism patrols across the country, shot him in the arm and it remains unclear how bad his injuries are.

Chekatt's police file photo shows a bearded man of North African descent, with a prayer bruise on the centre of his forehead. He has 27 criminal convictions for theft and violence, and has spent time in French, German and Swiss jails.