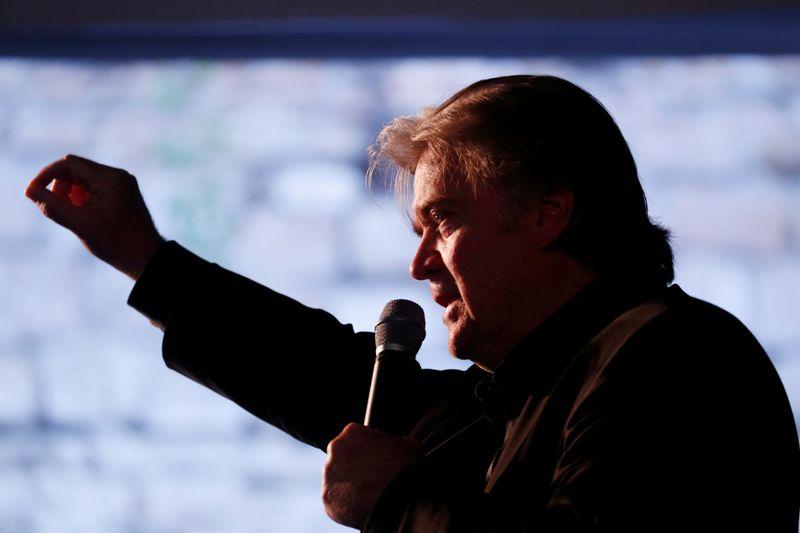 On Thursday, Bannon was arrested and charged with defrauding Trump supporters who donated to an effort to build a wall on the U.S.-Mexico border. Here is a look at Bannon's career:

Before he took over as chief executive of Trump's 2016 campaign, Bannon, 66, headed and co-founded Breitbart News, a website and voice for the alt-right movement, a loose right-wing confederation that includes hardcore nationalists, neo-Nazis, white supremacists and anti-Semites.

With a disheveled look marked by a tendency to wear multiple layers of shirts, Bannon attacked "globalists" and was seen as one of the architects behind Trump's "America First" agenda.

In the few months that he was on the job, Bannon helped drive the right-wing and populist parts of Trump's agenda. He railed against the Paris Climate Agreement from which Trump pledged to withdraw, and pushed him to scrap the North American Free Trade Agreement, which the president later replaced with a United States-Mexico-Canada Agreement on trade.

He was a force behind Trump's controversial and poorly implemented travel ban that sought to bar U.S. entry to people from several Muslim-majority countries, and he supported building a wall along the U.S.-Mexico border, one of Trump's signature campaign promises.

AFTER THE WHITE HOUSE

Trump turned on Bannon over the strategist's comments to the author of a book highly critical of the president and his family, and fired him in August 2017. Bannon had also clashed with other Trump administration officials.

Bannon's reputation as a political mastermind took a hit later in 2017, after Republicans lost a U.S. Senate seat in Alabama they had long held when the Bannon-backed Roy Moore, who was accused of improper conduct with teenage girls, fell to Democrat Doug Jones.

OUTSIDE THE UNITED STATES

Since then, Bannon has sought to expand his influence overseas. He had connections to the Vatican, helping to craft curriculum for a right-wing Roman Catholic institute in Italy in an effort to promote conservative thinking in the church.

He developed a relationship working with Chinese fugitive billionaire Guo Wengui, at one point appearing in a poorly lit video on a boat in front of the Statue of Liberty to denounce China's ruling Communist Party and call for a new federal state government in the Asian country.

(Reporting by Michael Martina in Detroit, Editing by Scott Malone and Paul Simao)