State of collapse: Can Lebanon's troubled leadership save the country?

By Samia Nakhoul and Ghaida Ghantous BEIRUT (Reuters) - Beirut's seismic explosion propelled the scarred Lebanese capital 30 years back in time with a violence scarcely imaginable even to a country that has endured so many wars, invasions, occupations, air strikes, car bombs and assassinations. The city that took 15 years to rebuild after a devastating 1975-90 civil war lies now with its port wrecked and districts in ruins, just like three decades ago 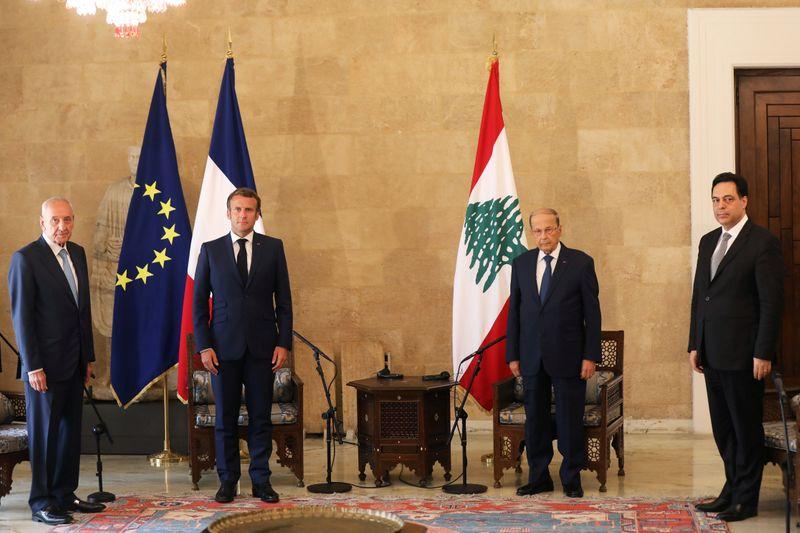 By Samia Nakhoul and Ghaida Ghantous

BEIRUT (Reuters) - Beirut's seismic explosion propelled the scarred Lebanese capital 30 years back in time with a violence scarcely imaginable even to a country that has endured so many wars, invasions, occupations, air strikes, car bombs and assassinations.

The city that took 15 years to rebuild after a devastating 1975-90 civil war lies now with its port wrecked and districts in ruins, just like three decades ago. Then, the Lebanese could justifiably hope for a rebirth. Now, hope is all but gone.

This old Mediterranean city picked itself up and rose from the rubble after the war. Beirut was rebuilt as a glamorous metropolis with much of its old splendour. Most of its highly educated expatriates – academics, doctors, engineers, economists, lawyers and artists – returned to take part in rebuilding their country.

Billions of dollars poured in: from Western and Gulf Arab countries, and from the far-flung Lebanese diaspora thought to be at least three times the size of the population.

Beirut regularly figured in publications such as Conde Nast Traveller as an exciting destination, a melting pot party-town, friendly and bursting with energy, spirit, charm and diversity.

Its lures included a wild nightlife, international festivals in Graeco-Roman and Ottoman settings such as Baalbek, with its temples of Jupiter and Bacchus, and tempting food and wines. Tourists strolled its waterfront, or ventured a short distance to ski on slopes or hike in lush mountains overlooking the city.

But the cataclysm that sent up a mushroom cloud over Beirut -- said by experts to be roughly a 10th the force of the atomic bomb dropped on Hiroshima 75 years ago to end World War Two -- may finally have broken the fabled resilience of the Lebanese.

"The situation is such a disaster with the country down on it knees," Jan Kubis, U.N. special coordinator for Lebanon, told Reuters. "The country is broken and the people are broke and broken".

The government resigned after waves of public indignation at the negligence that led to the blast, caused when it said 2,750 tonnes of highly combustible ammonium nitrate – used in fertiliser but also for explosives – was left unsecured at a port which is a local byword for corruption and warlord control.

President Michel Aoun, Prime Minister Hassan Diab and a host of officials had documents warning an explosion of the material could destroy Beirut. Aoun and Diab insisted they had referred the warning to the appropriate authorities.

The president announced an investigation. But diplomats who track Lebanon's sectarian power sharing politics suspect the probe may end up concealing more evidence than it reveals.

For traditional elites – warlords, dynastic leaders of the main Christian and Muslim sects, and their oligarch allies – the aftermath of the blast has been business as usual, just as it has been during the past year of worsening economic crisis.

"Unfortunately, what I see is the political figures, leaders still operating in the usual way," Kubis said. "Of course they understand that perhaps the country has reached the limit, but I don't see any changes in the behaviour".

They are already busy selecting another prime minister, who will have to agree to follow their policies, preserve their patronage networks and avoid reforms demanded by the IMF to extend aid, diplomats, officials and analysts say.

When French President Emmanuel Macron visited after the blast, he toured ground zero and walked in demolished districts, comforting the bereaved and listening to people's fury.

Not one of Lebanon's purported rulers has shown his face at the stricken scene. When Macron met Aoun, Diab, and parliament speaker Nabih Berri, residents said, it spoke volumes that only Macron wore a black tie out of respect for the dead.

At root, Lebanon’s many crises boil down to one problem: its rulers and their impunity, diplomats and analysts say.

At the end of the war, the militia leaders put on suits, shook hands and – with the exception of the Iranian-backed Shi'ite Hezbollah group – disarmed. But they remained in charge, and mostly under foreign patronage: the Sunnis and their Christian partners to the west and the Gulf, the Shi'ite and their Christian allies to Syria and Iran.

Syria, which stationed troops in Lebanon in 1976 for 29 years until its army was forced out after the 2005 assassination of prime minister Rafiq al-Hariri, deliberately preserved and refined the confessional system to divide and rule the sects.

Israel, which occupied parts of south Lebanon for 22 years, furnished apparent justification for Hezbollah to retain its arms and drive out the Israeli army in 2000.

Since then, Hezbollah has become Iran’s spearhead in Lebanon and the region and a force more powerful than the state at home. A power structure based on sectarian barons suits Hezbollah so long as none of them question its predominance.

"This is a country with deeply entrenched culture of impunity, this is the most striking element of Lebanon," said one foreign observer. "This port blast has cost 170 lives (yet) there are no strong demands for accountability at the highest level."

Lebanese commentator Sarkis Naoum said the former warlords took off their military fatigues and put on suits, but still run the country with the "militia mentality of corruption, tyranny, of sectarianism."

"We have become a failed state," he said. "They are directly responsible for turning this country into a dysfunctional state because of their divisions and hatred to each other. Each one tied himself to a foreign nation and allied himself to those abroad."

Mohanad Hage Ali, a fellow at the Carnegie Middle East Center in Beirut, agreed that deep reforms under the current political class were unlikely.

"They are not ready to give up this quickly the old order, which enables them to finance their parties and lavish lifestyles," he said, noting that the country's dollar reserves were drying up. "Time is running out ... There is the IMF or there is chaos."

Ordinary Lebanese have seen the value of their savings evaporate in local banks that shut them out of their own accounts. Lebanon’s rulers and bankers, in contrast, continue living comfortably.

Politics in Lebanon is so lucrative, Lebanese say, that it is studded with billionaires. Political barons pad the payrolls of ministries with their followers, siphon off government funds and award themselves inflated public contracts, they say.

There is a consensus among diplomats that the outgoing government came up with a reasonable reform plan in talks with the IMF, but nothing happened, mainly because they had no political support from the forces that nominated them.

"Those who stand to lose from the (IMF) deal are the pillars of the Lebanese state. They thought they could get $10bn-20bn from the IMF and then go back to their old tricks," said Naoum.

Amid the chaos, a new exodus of the professional classes is under way – just like during the civil war.

"This blast has brought Lebanon back to its knees," said one diplomat. "What Lebanon needs now is a modern system of governance."