Special Report: He waited 512 days behind bars for his day in court. It never came

By Linda So and Grant Smith MARIETTA, Georgia (Reuters) - From his jail cell, Chinedu Efoagui sent a plea. 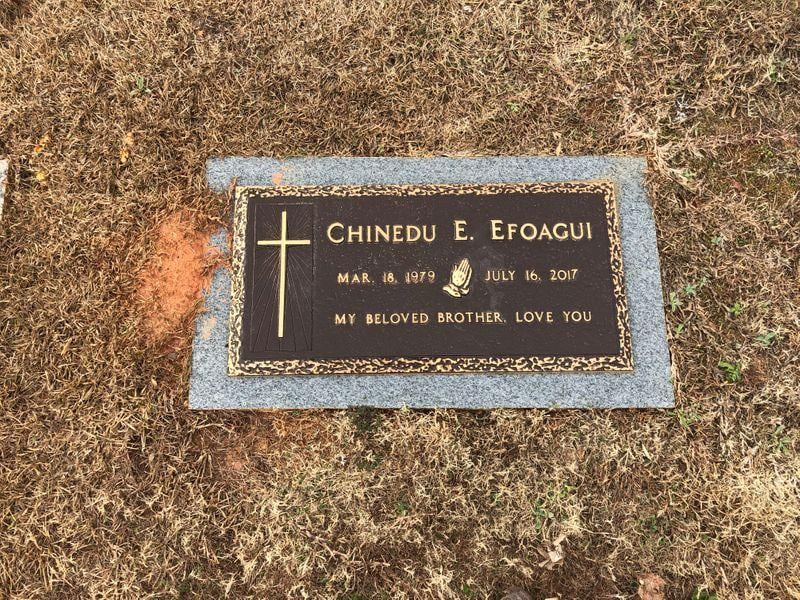 By Linda So and Grant Smith

MARIETTA, Georgia (Reuters) - From his jail cell, Chinedu Efoagui sent a plea. “I’m innocent,” he wrote his lawyer. “Have all the charges dropped.”

Born in Nigeria, Efoagui, 38, had been declared a gifted student by the Ministry of Education. He earned a master’s degree in computer science and won the visa lottery in 2012, securing a legal path to the United States, where he became a software programmer. “It was a dream come true,” said his sister Chioma.

He had never been in trouble with the law when he was arrested in 2016 in Georgia after a bizarre confrontation with police at a traffic stop while suffering a mental breakdown.

He was sent to the Cobb County Adult Detention Center in Marietta to await trial on charges that included obstructing a police officer. Days turned to months. When months became a year, he became despondent, complaining of severe chest and leg pain. “I fear for my life,” he wrote his lawyer.

In his last letter, written after more than 16 months inside awaiting trial, he asked when he could regain his freedom. The day never came.

After 512 days behind bars, Efoagui died of a pulmonary embolism from a blood clot in his leg that traveled to his lungs, depriving him of oxygen. The treatable condition can be caused by limited movement, such as being in a confined space for long periods.

His 2017 death is among nearly 300 documented by Reuters since 2008 in which inmates died after languishing in local jails for at least a year without ever getting their day in court to seek their freedom. Eighty-five inmates awaited their case resolution for at least two years before their deaths.

One reason: A bail system that frees defendants with the means to cover their bond. Efoagui is among those who couldn't afford bond, his family said. “People need to have money to get out,” said Nancy Fishman, formerly a project director at the nonprofit Vera Institute of Justice in New York. “And that means we have jails full of poor people.”

America’s 3,000-plus local jails house some 745,200 inmates. Although many are quickly released, the cases documented by Reuters reveal how justice churns slowly and fatally for hundreds facing local charges.

Of the unconvicted inmates identified by Reuters who were locked up for at least a year, 173 deaths were caused by a medical condition or illness. Sixty-one inmates died by suicide. Many suffered from untreated mental health issues while housed in county jails typically designed as short-term holding facilities.

On February 19, 2016 in Georgia, Efoagui parked his 2014 Chrysler 300 in the middle of the road and approached officers investigating a car crash. He accused one of stealing his driver’s license and said he was being framed as an Islamic State terrorist.

Efoagui told officers he didn’t know how to get home, then drove off on the wrong side of the road. Stopped by police, he ignored commands to stay in his car and opened the door, causing Officer Lloyd to stumble. Lanzing fired his Taser in Efoagui’s backside. “In Jesus’ name, I am not ISIS,” Efoagui said.

Lanzing said Efoagui broke his body camera clip, bringing felony charges of interfering with government property and obstructing an officer. Other charges were misdemeanors: Improper reduction of speed, driving on the wrong side of the road, failure to yield to emergency vehicles, disregarding a traffic control device.

Bond was set at $15,000, beyond his family’s reach. Attorney David West tried to get him into the county’s mental health court, a plan complicated when Efoagui refused to cooperate with mental health specialists who visited him.

On March 27, 2017, after more than a year in, he visited the infirmary for chest pain. His heart was racing at 133 beats per minute, according to jail medical records, well beyond the normal adult rate of 60 to 100. A doctor returned him to his cell.

In July, he complained of severe pain in his back, leg and chest. He waited at least a day for a nurse to respond, jail medical records show. The next day, he was found partially naked near a toilet. Taken to the infirmary, he pleaded, “Help me, I'm dying.” His body went limp.

He died July 16. An autopsy found that a blood clot from his left leg had moved to his lungs, cutting oxygen flow.

Smyrna Police spokesman Louis Defense called the death “a tragedy,” but added, “it's our job to enforce the law.” Wellstar declined to comment on Efoagui’s case, citing privacy concerns, but said specific requests for medical care were the responsibility of the Sheriff’s Office. The company ended its contract with the jail in May. The jail did not respond to requests for comment.

Four independent health experts who reviewed Efoagui’s medical records for Reuters said further testing could have saved him. “The swelling of his leg days earlier was almost definitely due to clots,” said Marc Stern, a University of Washington public health faculty member. Failure to address his chest pain “had an even higher chance of contributing to his death.”

In Nigeria, his family is left haunted by what turned out to be a death sentence for Efoagui.

“The injustice he passed through, without anyone being accountable, makes it harder for me to move on,” said his sister Chioma.

(Reporting by Linda So in Marietta, Georgia, and Grant Smith in New York. Additional reporting by Jason Szep. Editing by Ronnie Greene)