By Sam Edwards and Andrés González MADRID/BARCELONA (Reuters) - Spanish Prime Minister Pedro Sanchez and Catalan leader Quim Torra expressed a commitment to dialogue on Thursday in a symbolic joint declaration to ease tensions in the protracted crisis over Catalonia's ambitions to split from Spain. 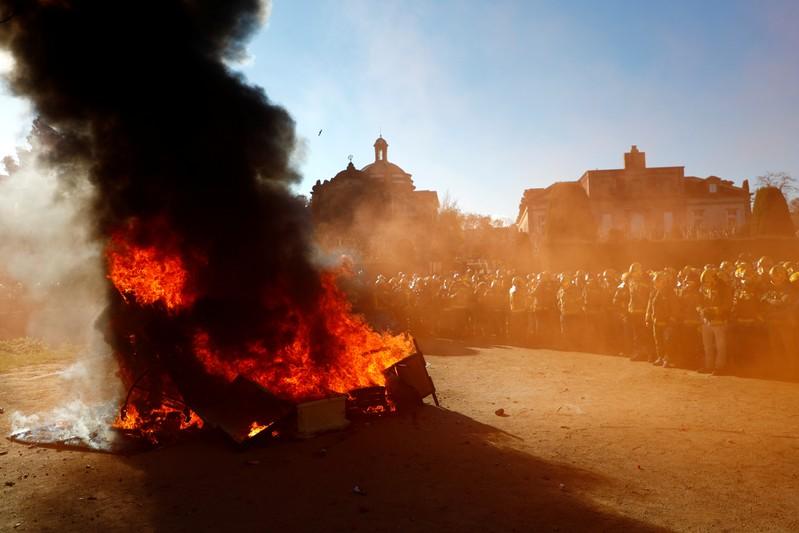 By Sam Edwards and Andrés González

MADRID/BARCELONA (Reuters) - Spanish Prime Minister Pedro Sanchez and Catalan leader Quim Torra expressed a commitment to dialogue on Thursday in a symbolic joint declaration to ease tensions in the protracted crisis over Catalonia's ambitions to split from Spain.

The statement indicates a turning point in the conflict between Madrid and the northeastern region, opening the door for a political solution to a dispute which reached its summit last year with its unilateral declaration of independence.

The meeting took place hours before a rare visit to Barcelona on Friday by the Spanish cabinet - an event which has led to protests being planned across Catalonia.

"Although maintaining notable differences...they share, above all, their commitment to an effective dialogue that conveys a political proposal with broad support in Catalan society," both governments said in a statement.

Sanchez and the pro-independence Torra agreed to keep working together, and Spain's vice-president Carmen Calvo and her regional counterpart Pere Aragones will meet again in January.

Earlier in the day, nine jailed Catalan separatist leaders called for large but peaceful protests and four of them called off a hunger strike they had started in early December.

In signs of a cooling down in the conflict, Torra's party and other pro-independence groups also supported the government's broad plan for budget deficits in 2019 and 2020, which could bode well for the 2019 budget vote in January.

The meeting prompted criticism of the leaders by the centre-right opposition People's Party and Ciudadanos, who accused Sanchez of "humiliation" and ask for Madrid to take control of the region again.

But Sanchez, who came to power in June 2018, has been more open to dialogue with Catalonia, which has 7.5 million people and accounts for about a fifth of Spain's economy.

His Socialists hold a minority in parliament and rely on the backing of pro-independence parties to pass legislation, including the 2019 draft budget.

Friday's planned demonstrations against Madrid will be the latest of many, some of which have drawn hundreds of thousands.

National police will be deployed in Barcelona to guard the cabinet meeting amid fears that extreme elements of the independence movement could stoke violence.

"(Sanchez's government) will want to provoke us, they will be angry, they would like us to be violent, and they will not succeed," the nine prisoners said in a letter released by their political parties.

"Our strength also lies in maintaining, always and everywhere, a civic and peaceful attitude," they wrote.

Spain's constitution prohibits regions from breaking away and the independence drive, backed by about half of Catalans, has caused the country's worst political crisis in decades.

During last year's independence vote, Spanish police attempted to shut down impromptu voting stations, provoking an international outcry with the use of batons and rubber bullets in melees that injured dozens.