MADRID (Reuters) - The search for a two-year-old Spanish boy who fell into a narrow well on Jan. 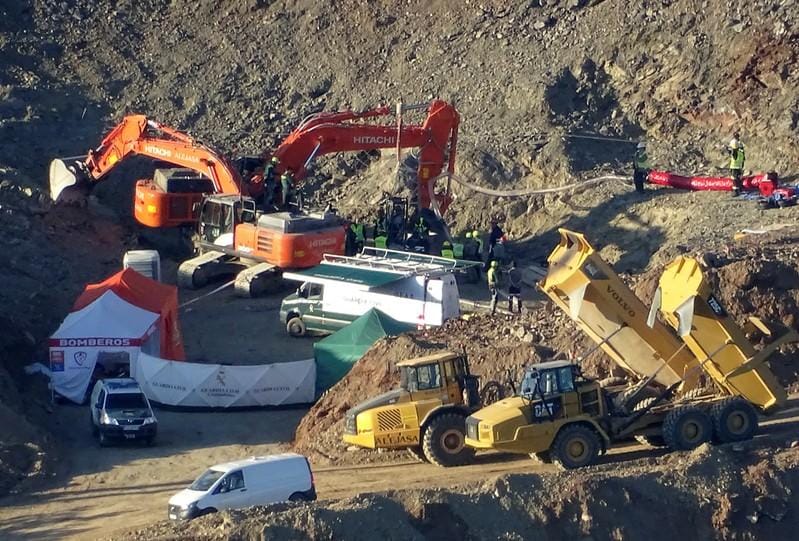 MADRID (Reuters) - The search for a two-year-old Spanish boy who fell into a narrow well on Jan. 13 entered its riskiest phase on Thursday as miners went down a new 60-metre (197 ft) parallel shaft to start digging across to the well.

There have been no signs of life since the boy, Julen, fell into the borehole as his family walked through a private estate in Totalan in southern Spain. Rescuers found the well was blocked with earth, raising fears soil had collapsed onto the child.

"Members of the Mines Rescue Brigade sent from Asturias (region) have just accessed the vertical well to start excavation ... in the search for Julen," said regional government representative Alfonso Celis at the site.

Miners working in rotating shifts will dig a 4-metre passage with picks and pneumatic hammers from the bottom of the shaft towards the borehole, which is 100 metres (300 feet) deep and just 25 cm wide.

Children and families have been holding candlelight vigils across Spain in support of the missing boy and of the massive rescue operation, even as hopes of finding him alive have faded with each passing day.

Engineers and miners have worked for 10 days in a row but have run into various technical problems while drilling a shaft parallel to the well.

"No miner is left in a mine, and Julen is now considered a miner," Juan Lopez Escobar, one of the engineers in charge of the rescue operation, was quoted as saying by EFE news agency. "Whatever may have happened, a miner is always pulled out."

He told reporters earlier that digging the horizontal passage would be the most dangerous part of the effort.

El Pais reported that Julen's parents suffered another tragedy in 2017 when their three-year-old son died suddenly after suffering a cardiac arrest while walking along a beach.