MADRID (Reuters) - Spain diagnosed 1,833 new coronavirus infections in the past 24 hours, the Health Ministry said on Monday, below Friday's post-lockdown record of 2,987 but more than three times the average seen in July. Daily infection statistics tend to dip on Mondays due to fewer diagnoses taking place on Sunday 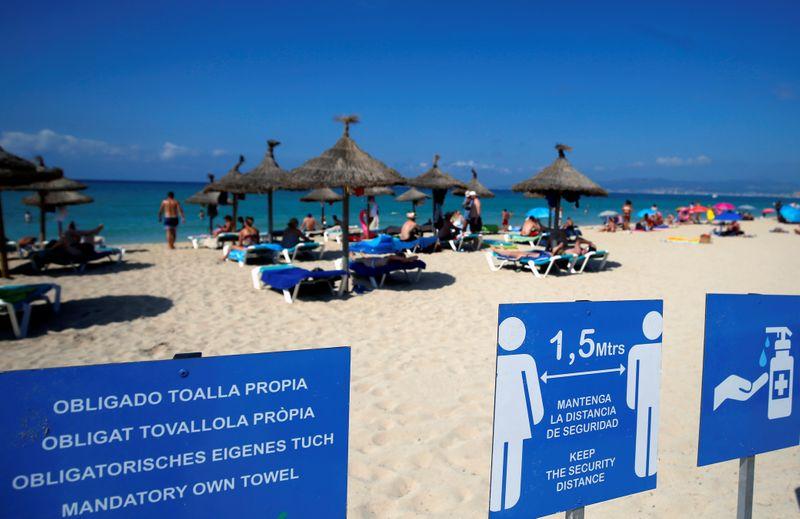 MADRID (Reuters) - Spain diagnosed 1,833 new coronavirus infections in the past 24 hours, the Health Ministry said on Monday, below Friday's post-lockdown record of 2,987 but more than three times the average seen in July.

Daily infection statistics tend to dip on Mondays due to fewer diagnoses taking place on Sunday.

Cumulative cases, which include results from antibody tests on patients who may have already recovered, rose to 359,082, with 32,389 detected in the past seven days, the ministry said.

Since lifting its strict lockdown at the end of June, Spain has struggled to contain a spiralling infection rate, despite mandatory mask-wearing enforced across the country and other restrictions.

The government's most senior coronavirus expert, Fernando Simon, said more testing was part of the reason for the surge.

"We are detecting much of what is out there. I wouldn't say 100% ... but between 60% and 70%," he told a news conference, adding that the figure was slightly below 10% during the epidemic's March-April peak.

Madrid, Catalonia and the Basque Country have all launched mass screening programmes in a bid to identify and isolate asymptomatic carriers of the virus.

While hospitals are not yet under severe pressure, Simon said some medical staff were beginning to feel the strain, particularly in Madrid, which has detected 9,430 cases in the past seven days, more than any other region.

Despite widespread fears that an influx of sun-seeking summer tourists would serve as a vector for infection, Simon said only 163 imported cases had been confirmed in the past week.

The ministry is monitoring 1,019 active clusters of the virus, defined as three or more linked cases spread across different households, up from 560 at the beginning of the month.