By Belén Carreño and Ingrid Melander MADRID (Reuters) - Spanish Prime Minister Pedro Sanchez called an early general election for April 28 on Friday, setting the stage for a divisive vote that could tilt the country toward the nationalist right. Sanchez, whose minority Socialist government has relied on support from regional and smaller parties, called the election after Catalans who had previously backed him joined with opposition parties in defeating his 2019 budget bill this week. Opinion polls show no single party would win the seats to govern on its own, pointing to lengthy negotiations between three or more parties. 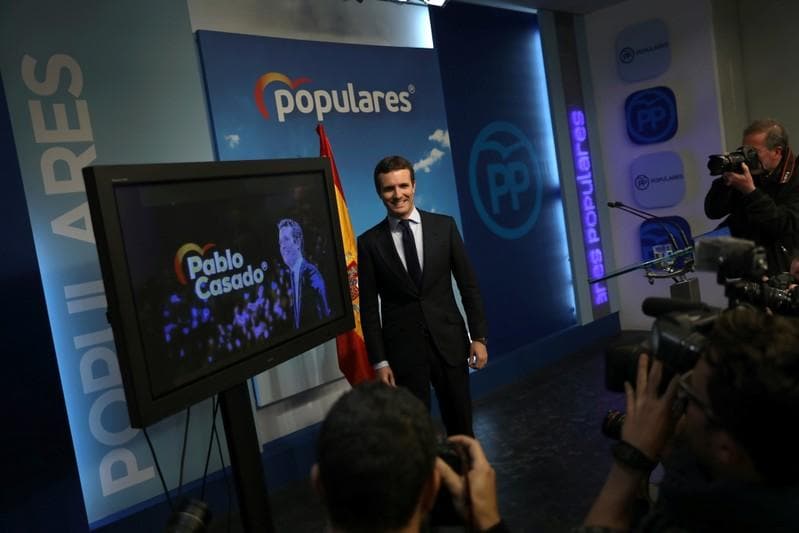 MADRID (Reuters) - Spanish Prime Minister Pedro Sanchez called an early general election for April 28 on Friday, setting the stage for a divisive vote that could tilt the country toward the nationalist right.

Sanchez, whose minority Socialist government has relied on support from regional and smaller parties, called the election after Catalans who had previously backed him joined with opposition parties in defeating his 2019 budget bill this week.

Opinion polls show no single party would win the seats to govern on its own, pointing to lengthy negotiations between three or more parties. Those could potentially include the far-right Vox party in what would be a first for Spain in the post-Franco era.

In a televised address that bore hallmarks of a campaign speech, Sanchez said he could not govern without a budget. Laying out his government's achievements, he said he was seeking a broader majority to pursue a social reform agenda.

"Between doing nothing and continuing without the budget and calling on Spaniards to have their say, I choose the second. Spain needs to keep advancing, progressing with tolerance," he said.

Spain, the euro zone's fourth largest economy, emerged from a deep economic slump in 2013 but has seen growing political volatility, driven by deep divisions over an independence drive in Catalonia and the emergence of new, populist parties.

Sanchez's Socialist party leads opinion polls, but with only a small advantage over the others. A total of five parties spanning from the far-left to the far-right could hope to be in government, depending on the outcome of the vote.

One of the most likely scenarios, according to surveys, would be an alliance between the conservative People's Party (PP), the centre-right Ciudadanos and Vox.

Anti-immigration Vox, virtually unknown just a few months ago, is one of several emerging parties that have upended the two-party establishment that has alternated in power since the return to democracy after Francisco Franco's death in 1975.

Twelve Vox lawmakers were elected in December to Andalusia's regional parliament, the first time that one of the hard-right parties that are increasingly popular across Europe has scored an electoral success in Spain.

With memories of the Franco dictatorship, the country was long seen as immune to such groups.

The Socialist party could stay in government if Ciudadanos decides not to stomach an alliance with the far-right nationally, and opts instead to side with the left, despite strong tensions between them.

Bond analysts have said any political impact on sentiment should be short lived given the country's decent macro-economic outlook.

With Catalan separatist leaders on trial in Madrid for a failed independence bid in 2017 that angered many voters in the rest of the country, that region's uneasy relationship with central government will feature high on the electoral agenda.

Sanchez's government - which had replaced a conservative minority administration removed from office last year in a no-confidence vote - had also depended on the support of other small regional parties to pass legislation.

But it was the Catalan nationalist parties, disgruntled by Sanchez's refusal to put an independence referendum on the agenda for any talks to ease Madrid-Catalonia tensions, who threw him against the ropes by rejecting the fiscal bill.

Pablo Casado, leader of the conservative's People Party (PP), welcomed what he called Sanchez "throwing in the towel" and said his party was ready to govern, adding his first move if elected would be to lower taxes.

Spain has had a succession of minority or caretaker governments over the past three years, and Sanchez's administration will have been the shortest in 40 years.

"I think that after the election, we will be in the same situation: parties on the right, parties on the left and there won't be a strong government," said a tourist guide in Madrid, who gave her name as Candi.

"There hasn't been one in years."