By Jose Elías Rodríguez and Joan Faus MADRID/BARCELONA (Reuters) - Spanish police arrested on Monday nine people linked to Catalonia's pro-independence movement who prosecutors said were plotting violent acts in the coming weeks and had been charged with terrorism and possessing explosives. Two were later released, acting Interior Minister Fernando Grande-Marlaska told reporters, without elaborating on why. 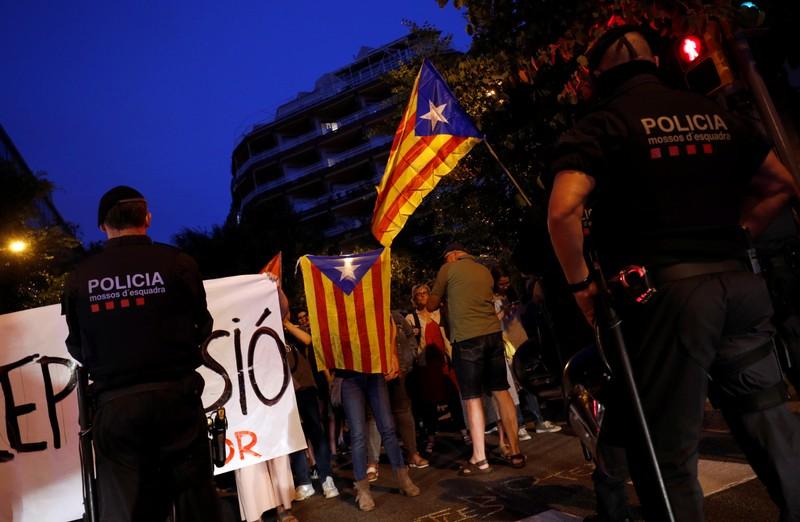 MADRID/BARCELONA (Reuters) - Spanish police arrested on Monday nine people linked to Catalonia's pro-independence movement who prosecutors said were plotting violent acts in the coming weeks and had been charged with terrorism and possessing explosives.

Two were later released, acting Interior Minister Fernando Grande-Marlaska told reporters, without elaborating on why. He added that "all the rights of all those under investigation are guaranteed."

Hundreds of pro-independence protesters rallied late on Monday in the Catalan cities of Barcelona and nearby Sabadell, demanding that those detained be freed and that Madrid "end repressions" in the region.

The Spanish High Court's prosecutors said in a statement the court had ordered the arrests to prevent the unspecified actions which "could have caused irreparable damage due to the advanced stage of preparations".

They said the court was certain the actions were planned for some time between the anniversary of Catalonia's Oct. 1, 2017, independence referendum and the announcement of the verdict in a trial of separatist leaders in Madrid - widely expected in the first half of October.

The head of Catalonia’s government hit back, accusing Madrid of creating a "false narrative" of Catalan violence and saying the pro-independence movement would "always be peaceful."

The Catalan secession movement has been a major challenge for Spain for years, triggering its biggest political crisis in decades in 2017 when the region briefly declared independence.

But it has largely been a peaceful movement characterised by mass protests, in contrast to a Basque separatist campaign that was for decades marked by a violent insurgency until ETA (Basque Homeland and Liberty) ended their fight in 2018.

Police said the investigation and raids targeted local groups working under the name Committees for the Defence of the Republic (CDR), which have staged periodic protests across Catalonia since separatist leaders were arrested after the 2017 independence declaration.

Police said they had seized documents, computers and materials that could be used to make explosive devices.

Those arrested were charged with rebellion, terrorism and possession of explosives, the prosecutors said.

A spokesman for the Guardia Civil national police force in Catalonia said the arrests followed a year-long investigation by the High Court.

"The repressive surge does not stop, it continues ... with the firm goal of breaking apart the democratic aspirations of our people," the CDR said on Twitter.

"Repression remains the only answer from the Spanish state. They are trying to build again a narrative of violence before the rulings. They will not achieve it. The pro-independence movement is and will always be peaceful," he said on Twitter.

If it is confirmed the materials seized were to be used in explosives, it would mark a first for CDR, a police spokesman said. Its members have been accused of rebellions and terrorism before but the charges were dropped.

In October 2018, in a bid to mark the one-year anniversary of the region's referendum, members of the CDR occupied a train station in the Catalan city of Girona and blocked highways, forcing train cancellations and snarling traffic. They later attempted, but failed, to storm the Catalan parliament.