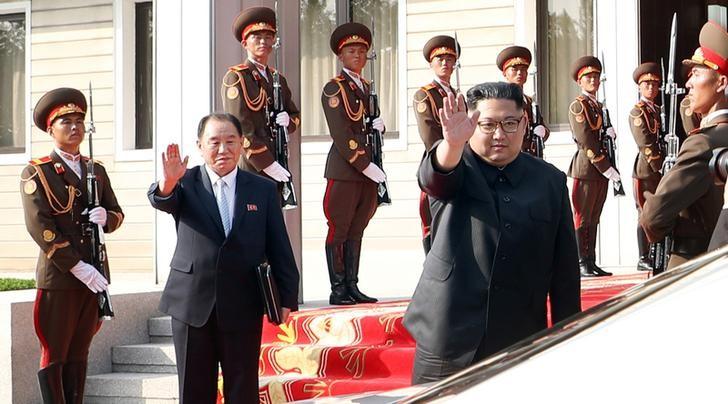 By Hyonhee Shin and Josh Smith

Moon and Kim Jong Un held a surprise meeting on Saturday at the border village of Panmunjom, during which they agreed that a North Korea-U.S. summit must be held.

"What's more important than anything from the latest inter-Korean summit was that the leaders easily got in contact, easily made an appointment and easily met to discuss urgent matters, without complicated procedures and formalities, just like a casual meeting," Moon told a meeting with senior secretaries.

Trump last week pulled out of the meeting with Kim, planned for June 12 in Singapore, before announcing he had reconsidered and American and North Korean officials were meeting to work out details.

On Sunday, the U.S. State Department said U.S. and North Korean officials had met at Panmunjom, a village in the Demilitarized Zone (DMZ) that runs along the heavily armed border between North and South Korea.

A "pre-advance" team of U.S. officials was also travelling to Singapore to meet with North Koreans there, the White House said.

Asian stocks and U.S. share futures gained on Monday, while shares in South Korean construction and railway firms surged after Trump said his officials and North Korea have resumed talks to prepare for the summit in June.

Shares of Shinwon Corp, which used to operate factories in the Kaesong industrial region near the Demilitarized Zone, jumped 22 percent, while Hyundai Engineering & Construction gained 24 percent.

A U.S. official told Reuters that Sung Kim, the former U.S. ambassador to South Korea, was leading the American delegation to meet North Korean officials at the border.

"It’s a good thing to have him onboard," said a former senior South Korean official who worked with Sung Kim in past. "He’s capable, level-headed, cautious, and has solid grasp of the issues and knows North Koreans well. But at the same time he has healthy scepticism."

After weeks of political posturing by both Trump and Kim, analysts welcomed the news the United States had dispatched a team of seasoned negotiators to hold several days of preparatory talks with the North Koreans.

"Sending such an experienced and professional team signals that the Trump administration is getting serious about the specifics of an agreement," said former U.S. deputy assistant secretary of defence for East Asia, Abraham Denmark. "It's also an implicit acknowledgment that running this negotiation out of the Oval Office has not worked, and that lower-level officials are needed to work out the details before a summit can take place."

Still, with only a few weeks left until the scheduled summit, such talks are unlikely to reconcile the differing positions over Pyongyang's nuclear arsenal, he said.

"No matter how experienced and knowledgeable these officials are, they will not be able to change the fundamental challenge between the United States and North Korea over its status as a nuclear power."

North Korea has faced years of economic sanctions over its nuclear and missile programs since it conducted its first nuclear test in 2006.

The United States has struggled to slow the isolated country's weapons programs, which have become a security priority for Washington given Pyongyang's promise to develop a nuclear-tipped missile capable of hitting the U.S. mainland.

In remarks on Sunday, Moon acknowledged Pyongyang and Washington may have differing expectations of what denuclearisation means and he urged both sides to hold working-level talks to resolve their differences.

The United States has demanded the "complete, verifiable, and irreversible" dismantlement of North Korea's nuclear weapons program. Pyongyang has rejected unilateral disarmament and has always couched its language in terms of denuclearisation of the Korean Peninsula.

Moon said Saturday's summit with Kim, which was organised on short notice after the North Korean leader requested a meeting, should be a model for increased contact between the leaders of the two Koreas.

"If we could hold working-level, back-to-back talks on both sides of Panmunjom if urgently necessary in addition to formal summits, it would expedite faster advancement of inter-Korean relations," Moon told his aides.