By Matthias Williams and Margaryta Chornokondratenko KOROSTEN, Ukraine (Reuters) - Ukrainian security service officers raided the Orthodox Christian cathedral in this northwestern town this month, saying it suspected its Russia-aligned clergy of spreading religious hatred. But Archpriest Anatoliy, the senior priest at the Cathedral of the Nativity, saw the raid as a hostile act in a theological battle between Ukraine's two main Orthodox factions that is part of a broader political conflict between Ukraine and Russia. 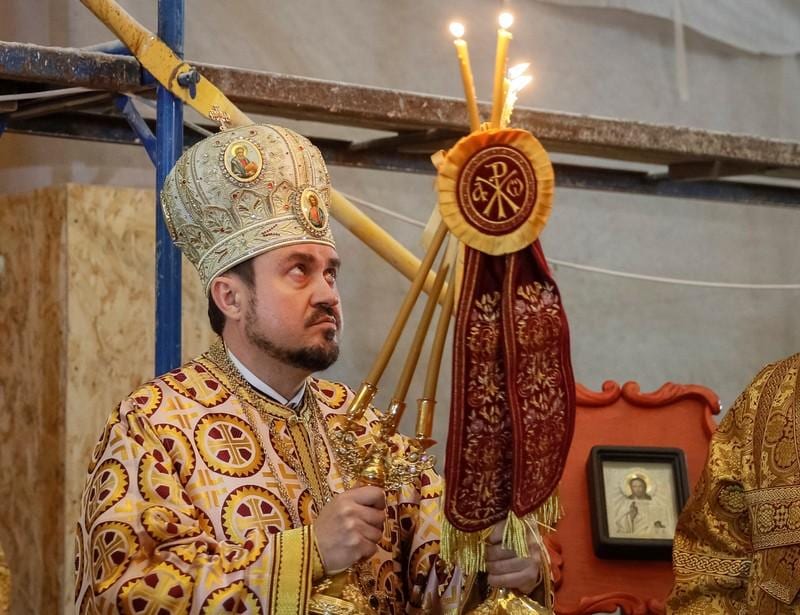 By Matthias Williams and Margaryta Chornokondratenko

But Archpriest Anatoliy, the senior priest at the Cathedral of the Nativity, saw the raid as a hostile act in a theological battle between Ukraine's two main Orthodox factions that is part of a broader political conflict between Ukraine and Russia.

The cathedral is aligned with Russian Orthodoxy, and part of a church which is widely referred to in Ukraine as the Moscow Patriarchate that is pitted against what is known as the Kiev Patriarchate.

The raid was one of several on churches with ties to Moscow in the run-up to a council in Kiev on Saturday at which Ukrainian priests will establish a new national church, breaking hundreds of years of relations with the Russian clergy.

The decision follows a synod in October presided over by the Ecumenical Patriarch in Istanbul, the global spiritual leader of Orthodox Christians, which endorsed Ukraine's request for an "autocephalous", or independent, church.

Ukraine's pro-Western leaders say the move is essential to keep Ukraine safe from what they see as Russian meddling and Moscow's neocolonial ambitions. President Petro Poroshenko compares it to the security umbrella that would be offered by membership of the NATO defence alliance.

But the Russian Orthodox Church has portrayed it as the biggest split in Christianity for 1,000 years and Saturday's council is taking place at a time of heightened tension between Kiev and Moscow.

Ukraine imposed martial law last month after Russia captured three of its vessels in the Kerch Strait between Russia's mainland and the Crimea peninsula.

Russia seized Crimea from Ukraine in 2014 after a pro-Moscow president was ousted in street protests in Kiev, and backed separatist rebels in eastern Ukraine in a conflict that has killed more than 10,000.

ALLEGATIONS OF INCITEMENT AND BULLYING

The SBU worries Russia is using the Ukrainian Orthodox Church (Moscow Patriarchate) to incite tensions as cover to invade.

"The deliberate instigation by the Russian special services of inter-church conflicts in Ukraine, to be combined with provoking direct acts of terrorism, may become a pretext for open military invasion by the Russian Federation's armed forces of our country," SBU Chief Vasyl Hrytsak said.

Showing video footage and phone intercepts at a briefing on Thursday, the SBU said it had uncovered a plot to instigate protests before the council.

Moscow has denied allegations of meddling in Ukraine and the Moscow Patriarchate sees the SBU raids as an attempt to bully its clergy into attending the council.

Saturday's council at the 11th century St Sophia Cathedral in Kiev will decide the make-up of the new church and elect its leader. The leader will then go to Istanbul to receive what is known as a "tomos", or decree, for independence.

The Moscow Patriarchate has said it will boycott the event and punish any priest who takes part.

"We do not recognise its legitimacy. This is not a council - this is a gang of bandits, who have gathered to do their work -- take over temples and destroy the church," Anatoliy said.

Religions divisions in Ukraine widened as relations between the West and Russia sank in 2014.

The Moscow Patriarchate sees itself as the one true church but authorities accuse it of being a Kremlin stooge helping to spread Russian propaganda and aiding the rebels.

The Moscow Patriarchate denies doing this and calls the independent church a ploy by Poroshenko to boost his ratings before a presidential election in March.

The Kiev Patriarchate was born after the collapse of the Soviet Union and its popularity has grown since 2014. It favours European integration and champions an independent church but the Moscow Patriarchate denounces it as schismatic.

(Additional reporting by Sergei Karazy in Korosten and Natalia Zinets and Pavel Polityuk in Kiev, Editing by Timothy Heritage)