By Idrees Ali WASHINGTON (Reuters) - Some of the 10,000 National Guard troops streaming into Washington D.C to help secure the area ahead of President-elect Joe Biden's inauguration will be armed, two U.S. 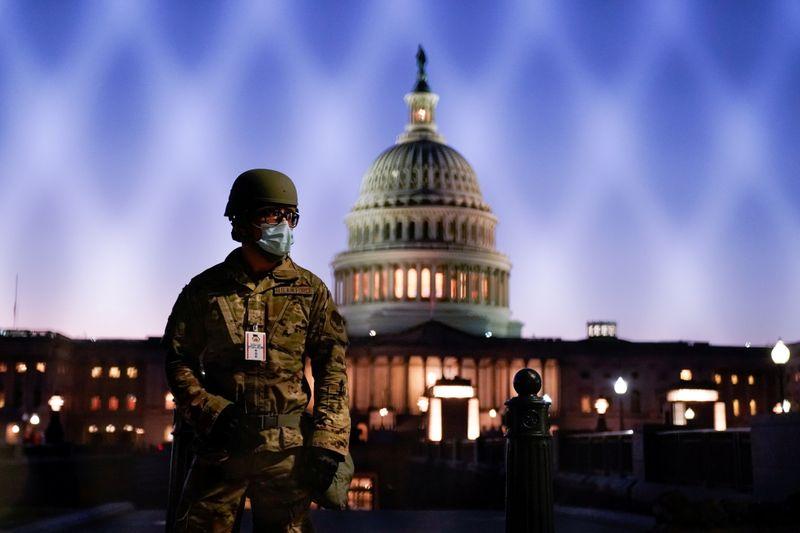 WASHINGTON (Reuters) - Some of the 10,000 National Guard troops streaming into Washington D.C to help secure the area ahead of President-elect Joe Biden's inauguration will be armed, two U.S. officials said on Tuesday.

The decision by U.S. Army Secretary Ryan McCarthy comes as the FBI has warned of armed protests being planned for Washington in the run-up to the Jan. 20 inauguration.

The U.S. officials, speaking on the condition of anonymity, did not say how many would be armed but noted that Guard troops helping secure the Capitol building would have weapons.

One of the officials said the troops would not be the first line of defense and would be supporting law enforcement agencies, but given the threat around the Capitol, troops needed to be equipped with their weapons for self defense.

The Army did not immediately respond to a request for comment.

On Wednesday, hundreds of supporters of President Donald Trump ransacked the Capitol building as Congress was in session to certify Biden's win, battling with police, sending lawmakers fleeing for safety and leaving five dead.

The National Guard has been authorized to send up to 15,000 troops to Washington, and tourists have been barred from visiting the Washington Monument until Jan. 24.

The chief of the National Guard Bureau, General Daniel Hokanson, told reporters on Monday that he expected about 10,000 troops in Washington by Saturday to help provide security, logistics and communications.

Though the president-elect's inaugural committee does not shoulder the burden of securing the event, it also bolstered its own fundraising efforts in recent days should there be a need for more support staff, contractors, equipment or supplemental private security.