MADRID (Reuters) - Heavy snowfall brought by Storm Filomena put parts of Spain including the capital Madrid on high alert on Friday, causing traffic congestion and forcing authorities in some regions to deploy the military to clear access to villages. 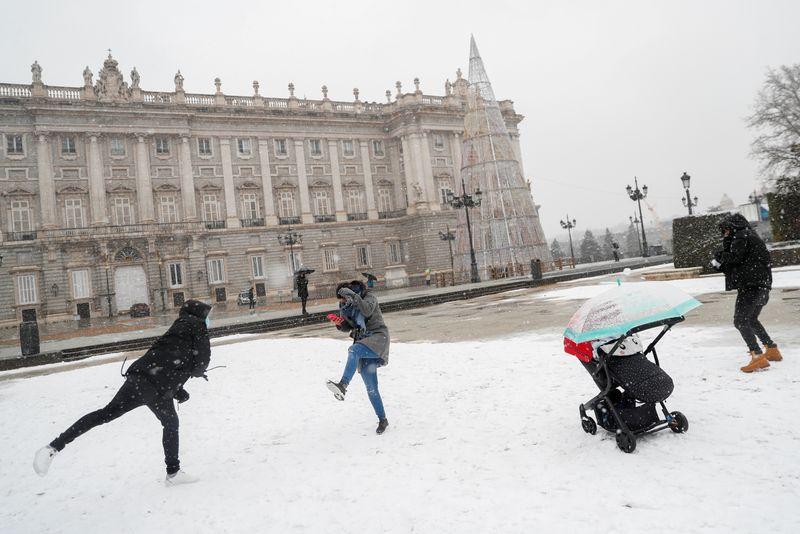 MADRID (Reuters) - Heavy snowfall brought by Storm Filomena put parts of Spain including the capital Madrid on high alert on Friday, causing traffic congestion and forcing authorities in some regions to deploy the military to clear access to villages.

With up to 20 cm (nearly 8 inches) of snow forecast in 24 hours and temperatures expected to hover around zero centigrade for much of the day, the south of the Madrid region, including the capital, is on its highest level of alert for the first time since the system was created in 2007.

Such events are rare in the region and tend to be disruptive to daily life and mobility, coming at a time when people are returning home after Christmas and New Year holidays. This year, however, there is less traffic than usual due to restrictions to curb the coronavirus pandemic.

Large parks in Madrid, including the famous Retiro next to the Prado museum, were closed as a precaution.

Ruben del Campo, a spokesman for the State Meteorological Agency, said the city was probably facing the heaviest snowfall at least so far in the 21st century.

"Perhaps we would have to go back to the snowfall of February 1984 or to that of March 1971 to find similar precedents if the forecasts we are expecting are correct," he added.

Castilla-La Mancha, one of the three regions put on high alert on Friday along with Madrid and eastern Valencia, closed schools, and troops were called in to clear access to some villages.

With hundreds of roads affected by the snow, trucks were banned from several important highways and authorities asked citizens to avoid non-essential travel.

Airport operator Aena urged passengers to use the subway to get to Madrid airport, and train operator Renfe cancelled some routes.

On Wednesday Spain registered the lowest temperature ever recorded on the Iberian peninsula, of -34.1C, in the Pyrenees in the north.

The storm first hit the Canary Islands with strong winds and rain. In Gran Canaria, a ferry with 59 passengers and 17 crew ran aground on Thursday night due to the strong winds when entering the port of Agaete.

On Friday the coastguard rescued the passengers, who were unharmed, but the ferry remained stranded.