Slovaks protest lack of progress one year since journalist's murder

BRATISLAVA (Reuters) - Thousands of Slovaks rallied to mark the first anniversary of the killing of an investigative reporter and his fiancee on Thursday and to protest what they see as a lack of government action against the sleaze he wrote about. Crowds gathered in the capital and in dozens of towns at rallies organised by 'For a Decent Slovakia' - a group of students and NGOs, who said in a statement that they demanded a proper investigation of the murders and a trustworthy government 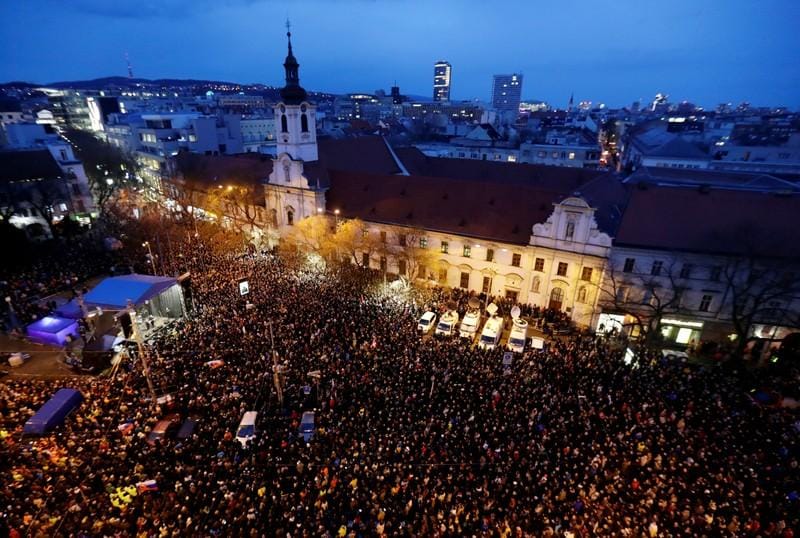 BRATISLAVA (Reuters) - Thousands of Slovaks rallied to mark the first anniversary of the killing of an investigative reporter and his fiancee on Thursday and to protest what they see as a lack of government action against the sleaze he wrote about.

Crowds gathered in the capital and in dozens of towns at rallies organised by "For a Decent Slovakia" - a group of students and NGOs, who said in a statement that they demanded a proper investigation of the murders and a trustworthy government.

"If we want to move forward, we have to know the names of those who ordered this monstrous murder," organisers said.

There were no official turnout estimates but the crowds were smaller than last year's string of protests that ousted then prime minister Robert Fico after a decade in power and led to a government shakeup.

The changes disappointed many, however, because no snap elections were held and the same three-party coalition has stayed in power. The next vote is due in 2020.

Fico remains chairman of the ruling Smer party and is seen as driving policy behind the scenes, often launching attacks against the media. "You are the biggest criminals, you have caused this country the biggest damage," Fico told journalists days before the anniversary.

Journalist Jan Kuciak, 27, was shot along with his fiancee in what prosecutors say was a contract killing.

The last article he worked on looked at Italian businessmen in Slovakia with suspected mafia links. He reported that one of the businessman, who has since been extradited to Italy on drug smuggling charges, had business connections with two Slovaks who later worked in Fico's office.

Fico has denied any wrongdoing and has also blamed the Hungarian-born billionaire and philanthropist George Soros for his fall.

Police arrested four people in September, including a woman identified only by her initials AZ, who was charged with ordering the murder. Media have identified her as Alena Zsuzsova. She has denied any wrongdoing.

She was never a subject of any of Kuciak's reporting but Slovak media have reported that she had business ties to the politically connected businessman Marian Kocner, currently held in custody on charges of forgery.

Months before his murder, Kuciak told the police that Kocner had threatened to start collecting information on him and his family. The police did not press any charges.

Kocner has denied any links to the murder.

"We learnt there are people in the police, prosecutor's office and government who do not want to protect journalists, instead protecting those who are the subjects of our stories," it said.

Prime Minister Peter Pellegrini on Thursday urged Slovaks to come together on the anniversary. "Investigation of the murders is one of this government's priorities. I wish that the murders did not divide our society anymore."