Washington: Skygazers were treated to a rare astronomical event on Sunday when a swollen "supermoon" and lunar eclipse combined for the first time in decades, showing the planet bathed in blood-red light.

The celestial show, visible from the Americas, Europe, Africa, west Asia and the east Pacific, will be the result of the sun, Earth and a larger-than-life, extra-bright moon lining up for just over an hour from 0211 GMT.

In downtown Brooklyn, huge crowd gathered on plazas and sidewalks, gazing up at the sky and trying to take photos with their smartphones.

The so-called "blood moon" was visible through much of what was a clear and seasonably pleasant early autumn evening in New York. 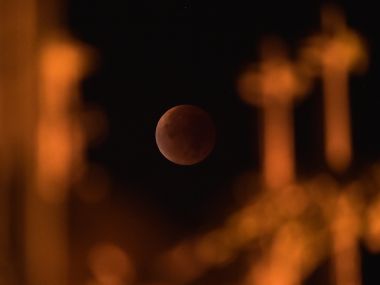 The Blood Moon as seen in Strasbourg, eastern France early on Monday. AFP

In other cities like Washington, cloud cover hid much of the spectacle.

During that moment, the moon was at its closest orbital point to Earth, called perigee, while also in its brightest phase.

The resulting "supermoon" appeared 30 per cent brighter and 14 per cent larger than when at apogee, the farthest point -- which is about 31,000 miles (49,900 kilometers) from perigee.

Unusually, our planet took position in a straight line between the moon and the sun, blotting out the direct sunlight that normally makes our satellite glow whitish-yellow.

But some light still crept around Earth's edges and was filtered through its atmosphere, casting an eerie red light that creates the blood moon.

In Miami, sky-watchers had a nice view on a cloudless, warm night. People came out to Bayfront Park and other parts of downtown to watch it, taking many photographs.

The moon appeared in more of a copper rather than reddish tone, however.

The moon travels to a similar position every month, but the tilt of its orbit means it normally passes above or below the Earth's shadow — so most months have a full moon minus eclipse.

The last super blood moon, only the fifth recorded since 1900, was in 1982, according to the US space agency NASA, and the next will not be until 2033.