SINGAPORE (Reuters) - Singapore's air quality deteriorated to 'unhealthy' levels on Saturday for the first time in three years, data from the National Environment Agency (NEA) showed, threatening to deepen a regional dispute over forest fires. Every dry season, smoke from fires to clear land for palm oil and pulp and paper plantations in Indonesia clouds the skies over much of the region, raising concerns about public health and worrying tourist operators and airlines. 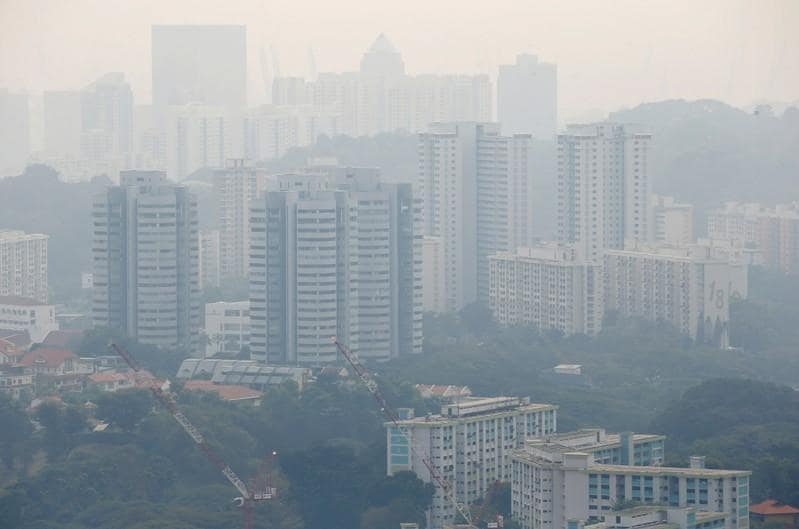 Every dry season, smoke from fires to clear land for palm oil and pulp and paper plantations in Indonesia clouds the skies over much of the region, raising concerns about public health and worrying tourist operators and airlines.

The 24-hour Pollution Standards Index, which Singapore's NEA uses as a benchmark, was in a range of 87-106 in the afternoon. A reading above 100 is considered unhealthy.

This is the first time the 24-hour benchmark has breached 100 since August 2016, data shows.

"There has been a deterioration in the haze conditions in Singapore this afternoon," the NEA said in a statement.

"This was due to a confluence of winds over the nearby region that led to more smoke haze from Sumatra being blown toward Singapore."

Many people chose to stay indoors on Saturday as a grey haze shrouded the city.

Malaysia closed hundreds of schools and sent half a million face masks to Sarawak this week, after the smoke built up to unhealthy levels.

Air quality in Indonesian towns closest to the fires have risen to hazardous levels and on Wednesday thousands held mass Islamic prayer for rain.

Malaysia said this week that Prime Minister Mahathir Mohamad would write to Indonesia's leader to raise his concern about cross-border haze.

Singapore, which prides itself on its clean air, passed a cross-border air pollution law in 2014 that makes those who cause haze both criminally and civilly liable.

Next weekend is the Singapore Formula One Grand Prix road race, a marquee event that draws the world's attention to the wealthy tourist destination.