Show the EU what Brexit you want, PM May tells British lawmakers

By Kylie MacLellan, William James and Elizabeth Piper LONDON (Reuters) - Prime Minister Theresa May asked the divided British parliament to send a message on Tuesday to Brussels that it would support a European Union withdrawal deal if a plan to avoid a hard border in Ireland is replaced. Parliament has been in deadlock since May's Brexit plan, agreed after months of negotiation with the EU, was rejected by an overwhelming majority of lawmakers. 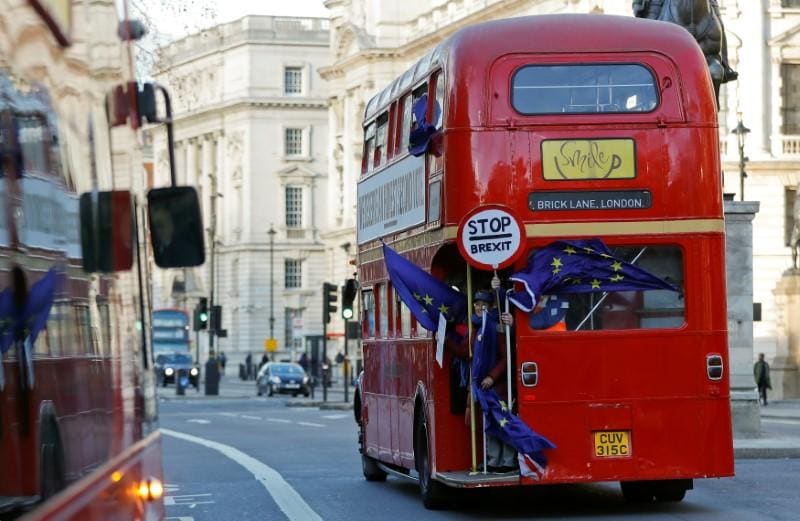 LONDON (Reuters) - Prime Minister Theresa May asked the divided British parliament to send a message on Tuesday to Brussels that it would support a European Union withdrawal deal if a plan to avoid a hard border in Ireland is replaced.

Parliament has been in deadlock since May's Brexit plan, agreed after months of negotiation with the EU, was rejected by an overwhelming majority of lawmakers.

With exactly two months until Britain is due to leave the EU on March 29, there is no agreement in London on how and even whether to leave the world's biggest trading bloc.

Parliament on Tuesday will try to find some way forward by debating and voting on what changes they want May to seek to her deal.

"Today we have the chance to show the European Union what it will take to get a deal through this House of Commons, what it will take to move beyond the confusion and division and uncertainty that now hangs over us," May told parliament before five hours of debate on how to end the stalemate.

"I also accept that this House does not want the deal I put before it, in the form that it currently exists ... Today we need to send an emphatic message about what we do want," said May, adding she wanted "a significant and legally binding change to the Withdrawal Agreement".

However, Brussels has repeatedly said it does not want to reopen the treaty, which has been signed off by the other 27 EU leaders, and has said there must be a "backstop", a guarantee to ensure there is no return to a hard border between Ireland and the British province of Northern Ireland.

"We will not reopen the Withdrawal Agreement. So it may be about semantics of what ‘reopening’ means," an EU diplomat involved in Brexit talks said. "If things go towards more declarations, assurances or statements - we can do that. But if she really wants to reopen the whole thing, then it’s a ‘no’.”

Unless lawmakers agree a way forward or the EU agree to extend the negotiating period, then Britain will leave without any deal, a scenario that businesses fear will bring chaos to the world's fifth biggest economy.

There have been warnings that borders will be snarled up, hitting trade and leading to shortages. On Monday major grocers and fast-food restaurants warned food supplies could be seriously disrupted.

Sterling has recently hit 2-1/2 month highs of $1.3218 against the U.S. dollar on hopes that a no-deal Brexit would be avoided but has retreated slightly from those levels and was holding at $1.3178 at 1520 GMT on Tuesday.

May wants lawmakers to support the proposal or amendment authored by senior Conservative lawmaker Graham Brady to call for the backstop to be removed and replaced with "alternative arrangements" during a series of votes, which are due to start at 1900 GMT.

Her spokesman said her strategy had won the backing of her cabinet but it is not a foregone conclusion that lawmakers will back the amendment, one of seven proposed to try to break the impasse.

Others include one proposed by opposition Labour lawmaker Yvette Cooper, which seeks to shift control of Brexit from May's government to parliament and if successful could have a profound effect, giving lawmakers who want to block, delay or renegotiate Brexit a possible legal route to do so.

If a subsequent piece of legislation is passed, it would give May until Feb. 26 to get a deal approved by parliament or face a vote on whether to ask the EU to delay Britain's exit to avoid leaving without a deal on March 29.

Opposition Labour leader Jeremy Corbyn said his party would back this proposal, adding a delay to the March 29 departure date was now inevitable.

"In backing her amendment we are backing a short window of three months to allow time for renegotiation," he said.

Another faction, led by both Conservative pro-EU and pro-Brexit lawmakers, are trying to come up with a new plan for Brexit - to return to Brussels with two new options.

It calls for the backstop to be renegotiated or if that fails to leave on World Trade Organization rules at the end of 2021.

Tuesday's votes are not a rerun of the Jan. 15 vote on whether to approve May's Brexit deal, but a chance to discover what sort of changes would be required to win the support of parliament, so the prime minister can try to renegotiate the agreement in Brussels.

May said she would hold a second "meaningful" vote on her deal as soon as possible. Strong support for the Brady amendment would allow May to tell the EU that changes to the backstop could be enough to allow her to get parliamentary approval for a deal.

The EU's deputy chief negotiator Sabine Weyand said on Monday the bloc was "open to alternative arrangements" on the Irish border but that Brady's proposal did not spell out what they were.

Brady's amendment is not certain to pass, as a group of prominent pro-Brexit Conservative lawmakers have said they are yet to decide whether they will support it.

The small Northern Irish party which props up May's minority government but opposes her deal, said the contents of May's speech to lawmakers on Tuesday will determine whether it will support the amendment.

(Additional reporting by Andy Bruce and Andrew MacAskill in London and Gabriela Baczynska in Brussels; Writing by Michael Holden and Guy Faulconbridge; Editing by Angus MacSwan)